A video of the protest shows Bundy shoving a health district employee who was blocking his path, knocking the man backwards. 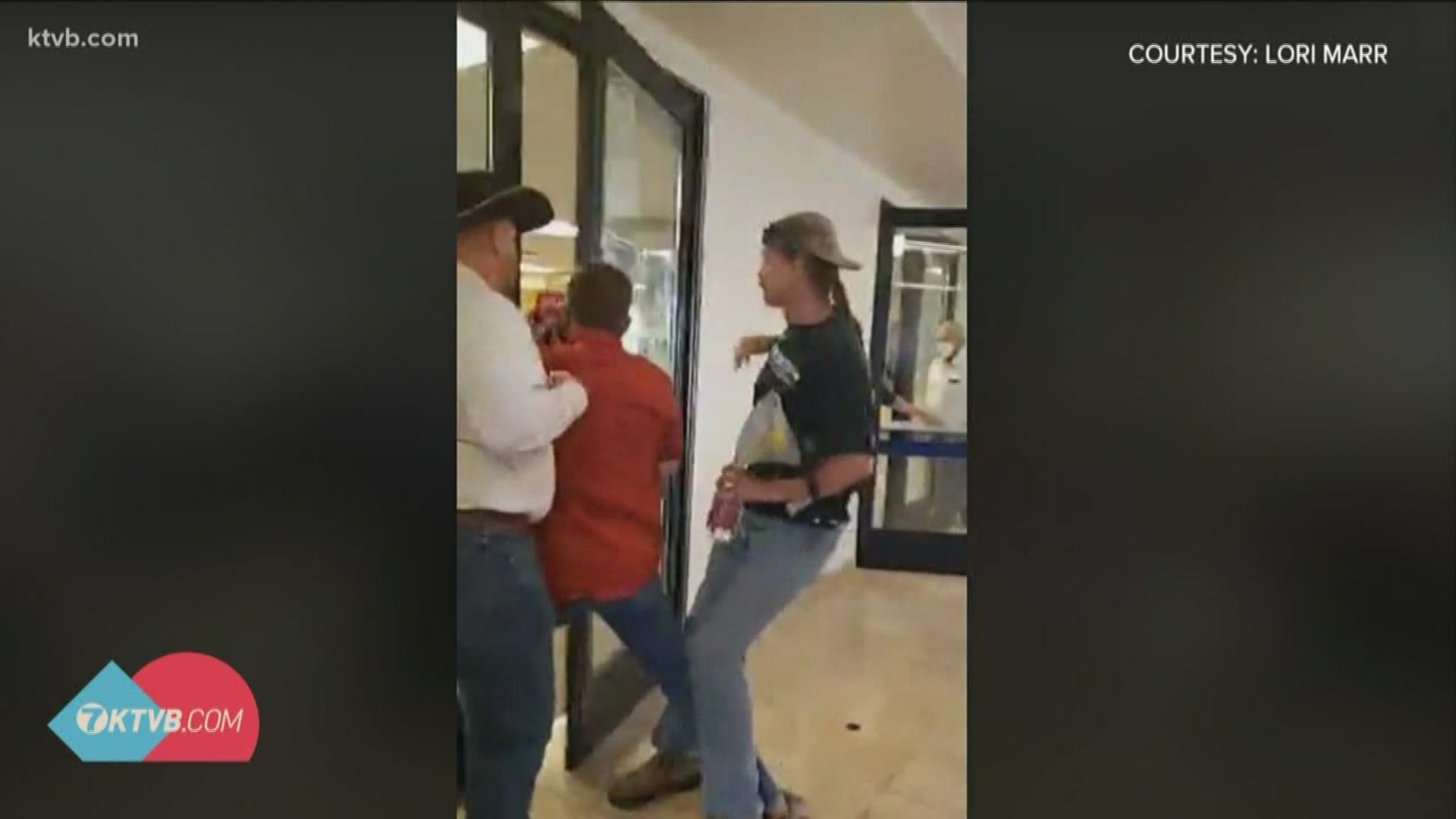 CALDWELL, Idaho — A planned Southwest District Health meeting to discuss the possibility of ordering a mask mandate amid rising COVID-19 cases was scrapped Thursday morning after "a large amount of protesters" turned up at the building and forced their way inside.

Multiple Caldwell Police officers were dispatched to the Southwest District Health building on Miami Lane in Caldwell, but no arrests were made.

In a video recorded of the incident obtained by KTVB, Ammon Bundy and multiple other people can be seen standing at the entrance to the building, arguing with an employee blocking the doorway about why they should be allowed inside.

At one point, Ammon asks the employee to call the police.

The Southwest District Health building is not closed to the public, but anyone who comes inside must wear a mask and undergo a temperature check, according to officials. The protestors were not wearing masks.

The meeting, which was set to be conducted over Zoom, was scheduled to begin at 8:30 a.m. but was repeatedly delayed. At about 9 a.m., a board member speaking via teleconference said the meeting would be rescheduled due to the number of protestors at the Caldwell building and concerns from law enforcement.

At least some members of the board were physically inside the building at the time.

At one point, several minutes into the video, Bundy shoves the employee in the doorway, knocking the man back. He and several others scramble into the building.

Minutes later, as the same man tries to keep the group out of an interior meeting room, another scuffle breaks out, with Bundy and others pushing the man, yanking the door out of his hands and grabbing him by the shirt.

RELATED: Live at 7 p.m.: What will Idaho school look like this fall?

The group of protestors make it inside the meeting room and continue arguing with health district employees. Several of the people on camera say that their voices are being stifled and the meeting should be held outside rather than streamed over Zoom.

"Zoom is unreasonable, it's inhumane," yells Lori Marr, the woman filming the video.

"Look at my children crying after seeing the violence that man committed against a baby!" another woman says, after which her young daughter weeps "I'm so scared."

Towards the end of the video, Bundy asks Caldwell Police officers to halt the meeting, or to arrest him.

"The reason why I want to be arrested by you guys is then I have standing against you," he tells the officers.

"Southwest District Health staff are safe and a  crisis response team has been deployed to provide support to staff," the district said in a statement.

In addition to discussion and a possible vote on a mask mandate, board members had been scheduled to hear from leaders of area hospitals including Saint Alphonsus, West Valley Medical Center, St. Luke's Health System, and Weiser Memorial Hospital with updates on the latest information in their fight against coronavirus.

The protesters dispersed after the meeting was canceled.

According to board member Tom Dale, the rescheduled meeting will be held on Tuesday but the board has not yet set a venue for the meeting. The district will coordinate with Caldwell Police ahead of the next meeting, he said.

This is not the first time Ammon Bundy, who led a 2016 occupation of an eastern Oregon bird refuge, has been involved in protests directly related to Idaho's response to the coronavirus pandemic.

After Idaho Gov. Brad Little issued a statewide stay-at-home order in an attempt to slow the spread of the virus, Bundy held multiple meetings for his followers and urged people to attend a large in-person Easter celebration. He also published the home address and staged a protest outside the house of a Meridian Police officer who arrested a woman for trespassing after she repeatedly refused to leave a closed-down playground.

KTVB has reached out to Caldwell Police for comment. Check back for updates.