'It's a scary, scary situation': Pregnant mother in Spokane evicted during COVID-19 outbreak

A soon-to-be mother of three lost her apartment in the middle of a global pandemic. Now, she has no idea where she and her children will go next. 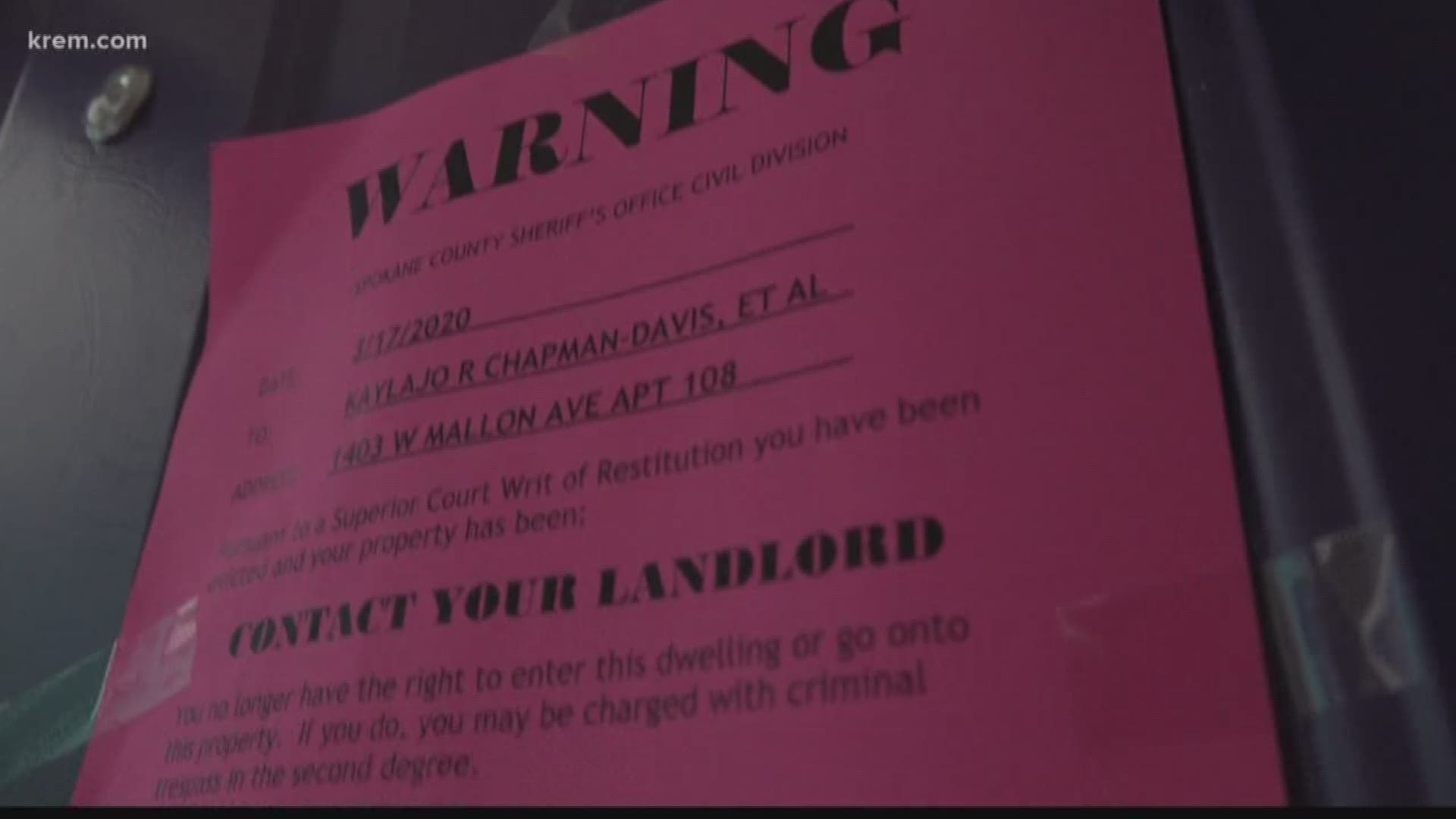 SPOKANE, Wash. — For roughly the last year, Kayla Jo Chapman-Davis lived at the Walnut Corners apartments in West Central Spokane, with her 2 and 4-year-old children.

On Tuesday, she was evicted.

In the midst of the global coronavirus pandemic that's causing local leaders to ask, or in some cases order, people to stay in their homes, Chapman-Davis has lost hers.

She is eight months pregnant.

The complex is run by Spokane Urban Ministries, a religious nonprofit. The president of the board said a series of lease violations led management to begin evictions proceedings for Chapman-Davis in January.

"We were in evictions proceedings for non-payment of rent and for conduct issues," said Alan Eschenbacher.

Chapman-Davis says the reason she was given for the eviction changed multiple times and believes it was the result of personal conflict with the primary property manager.

"These places should be willing to work with families, and they're just not," she said in tears.

Eschenbacher says due to failed payments and other issues including the unauthorized move-in of Chapman-Davis's fiance, Spokane Urban Ministries elected not to renew Chapman-Davis's lease when it expired in December. Upon her request, he says, they initially decided to allow her to stay through January, but afterwards she still refused to leave, which is when they began eviction proceedings.

"We bend over backwards for a lot of tenants," Eschenbacher said.

Both parties say they reached an agreement in court. Chapman-Davis would pay a certain amount and have until the end of March to move out. Eschenbacher says she failed to pay on time, and so the eviction was then carried out.

"This morning I woke up with a sheriff [deputy] at my door, telling me that I need to leave," Chapman-Davis said. "It was so bad. I had to wake up my two young children, who were in bed in pull-ups at the time."

Initially, she said she wasn't allowed in the apartment at all.

"They wouldn't let me grab diapers, cups, [my kids'] blankets, clothes, their shoes, anything. I literally had to grab what I could see and get them dressed in the hallway," she said.

Later, Chapman-Davis, along with some friends and family who came to support her, were allowed in to hurriedly unpack the apartment and load its contents into a U-Haul truck a family member had brought.

But now, regardless of the cause of the eviction, Chapman-Davis is concerned because she has no idea where she and her kids will go now, as the COVID-19 pandemic continues to spread and shut down entire cities.

"I don't [know]. I really really don't, and that's what scary," said Chapman-Davis, starting to cry. "Especially for my two babies. I don't want to lose them. They're my world. And that's what's really scary, because you never know what's going to happen next."

Eschenbacher acknowledged the timing is concerning, but says that right now, the organization is simply going by the rules.

"It's a complicated scenario," he said.

That's exactly why there's a growing push, both in Spokane and across the country, to change the rules.

Spokane County Sheriff Ozzie Knezovich and Spokane City Council Member Kate Burke, not commonly on the same side of major policy issues, have both said they're looking into ways to enact a moratorium on evictions during the coronavirus outbreak.

"We've been told to stay safe, stay enclosed, stay social distanced from each other," said Burke. "How are you supposed to do that if you're not in a home?"

Burke argues evictions are now longer not only a social justice or tenants' rights issue, but a public health crisis as well. Putting people out of their homes could overload an already-struggling shelter system, and worsen the spread of the virus.

"Our community writ large is really going to be hit hard if we start evicting people and we don't do anything about it," said Burke.

She hopes to have an ordinance on the table by Thursday.

A spokesperson for Washington Gov. Jay Inslee said that "everything is on the table" and that there are ongoing discussions about an evictions moratorium, but that nothing has been decided yet.

A spokesperson for Spokane Mayor Nadine Woodward said that the mayor's office is also in conversations about such proposals, although they want to beware unintended consequences.

Evictions moratoriums have already been instituted due to the effects of coronavirus in places like Miami, San Jose, San Francisco and Seattle.

Meanwhile, Chapman-Davis's kids are staying with a family member while she tries to figure out what's next.

RELATED: West Spokane tenants given 20 days to vacate without reason