Gov. Inslee's reopening plan also includes a variance for counties to meet other criteria, which could include per capita cases. 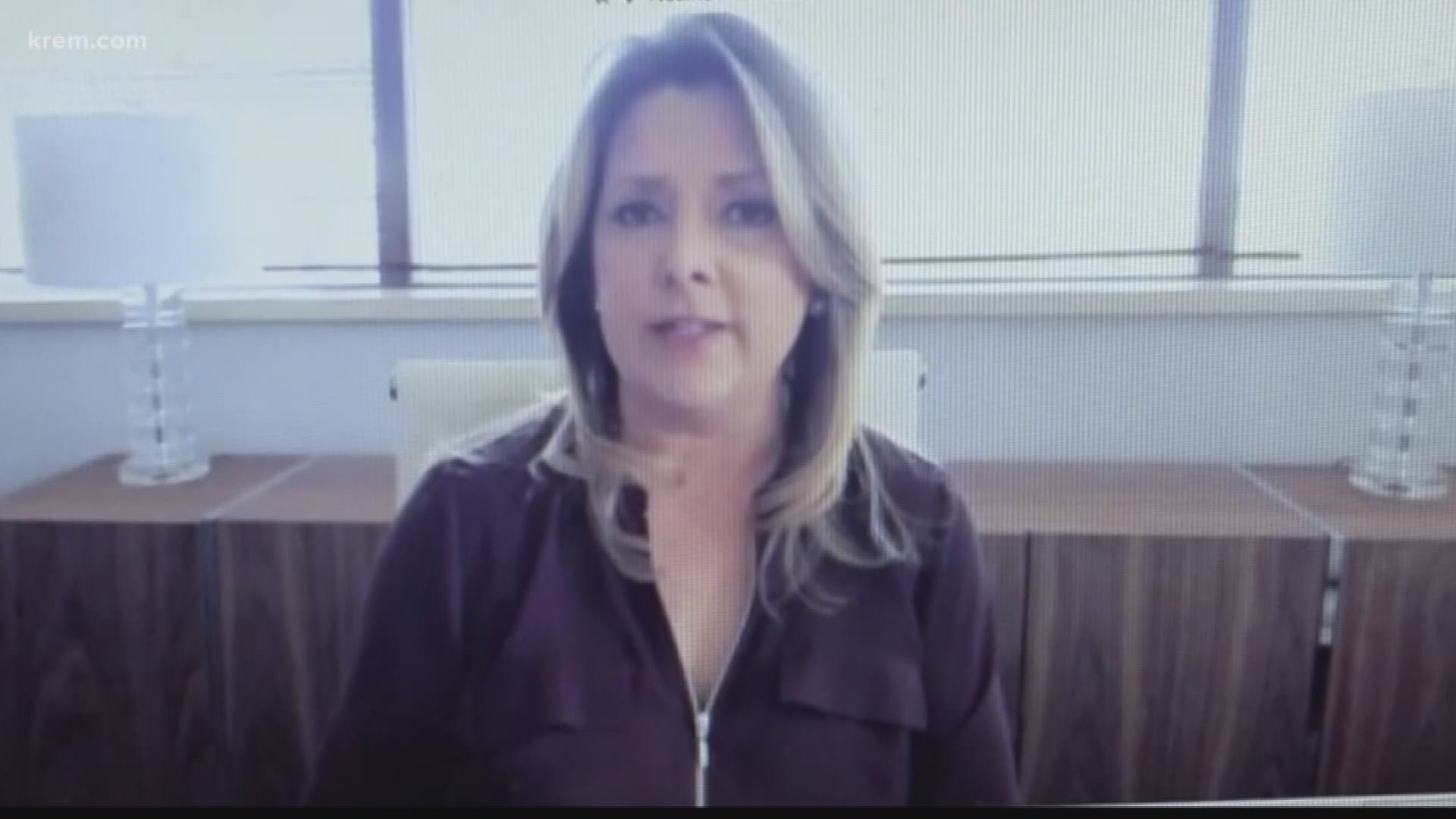 SPOKANE, Wash. — Gov. Jay Inslee's office clarified on Wednesday that some larger Washington counties, such as Spokane, cannot meet the metric of no new coronavirus cases in three weeks.

This comes after Spokane Mayor Nadine Woodward said Inslee told local leaders he is sticking to the metric in allowing counties to reopen sooner than the rest of the state.

Inlsee spoke with local mayors on Tuesday about plans to reopen Spokane County. They asked the governor to move Spokane onto phase two earlier than the rest of the state based on the latest data.

"We didn't necessarily get the answer we wanted today, but those conversations will continue," Woodward said.

In a twitter thread on Tuesday night, Woodward called the three-week benchmark "unrealistic for a county with 500,000-plus people."

But Inslee's office clarified on Wednesday that counties with less than 75,000 people are included in those that should not have a confirmed case in a three-week period. Ten counties meet this criteria right now, with others soon to meet it — including Whitman County, which is home to Pullman.

"Obviously, some of our larger counties are unable to meet this metric," said Adam McDaniel, Inslee's representative for eastern Washington, in an email to local leaders on Wednesday morning.

The governor's reopening plan also includes a variance for counties to meet other criteria, which could include per capita cases, McDaniel added. The plan says the state Department of Health and Inslee will work over the next two weeks to address additional criteria for allowing counties to apply fora variance.

Local jurisdictions will be allowed to partially implement a phase, according to the plan.

Mayor Woodward released a statement on Wednesday afternoon in response to clarification from the governor's office:

“The governor has been generous with his time and willingness to meet with us over past few weeks as we all work through this health and economic emergency together. We appreciate the clarity offered today by his office and look forward to additional guidance related to reopening the Spokane region. Our discussion yesterday touched briefly on the county variance request process and the selection criteria, including not having a positive test within the past three weeks, to determine the initial 10 counties that potentially could open early. Additional guidance and considerations based on criteria attainable by larger counties is welcomed and appreciated. This is an evolving process and we remain focused on working with the governor in the interest of public health and economic recovery for the benefit of our citizens and businesses.”

McDaniel wrote in an email that the governor is looking forward to seeing plans for a regional reopening.

Washington Director of Commerce Lisa Brown also tweeted on Wednesday morning that Woodward's previous statements were "incorrect." She said the state Department of Health is "working to develop standards for larger counties" to reopen, which would likely be different than the initial standards set for smaller counties.

Spokane County Health Officer Dr. Bob Lutz said during a briefing on Wednesday that there had been a misunderstanding about the criteria.

“That is not a variance that would be available to larger counties based on that unachievable metric," Lutz said of the benchmark for no new cases in three weeks.

Lutz also echoed comments from Brown, saying that public health officials are looking right now at what metric would be reasonable for a county of Spokane's size.

Woodward said on Tuesday that she believes the Spokane region has already hit the benchmarks necessary to reopen.

"We're seeing new cases in single digits for a country with a half-million [person] population, and we have no new deaths. We have 10 people in the hospital right now," Woodward said. "I think we have to start looking at those numbers too."

Right now, the governor's office is looking at the number of coronavirus cases in a county. But Woodward believes counties should be considered for early reopening based on deaths and hospitalizations, especially since Spokane's data is showing no spikes in cases.

She added that the Spokane region is finalizing its collaborative plan on how it would reopen. It will be presented to Inslee next week.

According to Woodward, the governor also plans to deploy 500 National Guardsmen across the state to help with contact tracing. This is a method used to slow the spread of infection by identifying people who may have been in contact with someone who is infected.

Spokane City Council President Breean Beggs also sat in on this call Tuesday. He confirmed with KREM 2's Amanda Roley the city council gave a draft resolution to the mayor's office on how the city would reopen.

"We really want to get to what are the practical things that need to happen," Beggs aid. "It's testing, it's contact tracing, personal protective equipment, it's COVID-19 inspectors that could come to each business and advise them."

He said, in general, city council and the mayor's office have the same goal to reopen safely. Council members just want to ensure there are public health guidelines in place.

City council is expected to vote on the resolution at the next Monday council meeting.

Woodward took to Twitter Tuesday evening in a thread about Inslee's decision, calling benchmarks set by the governor as "unrealistic" for the county.

The mayor went on to claim that the county had flattened the curve, citing the fact that Spokane County has been reporting single-digit increases in cases and that 10 people are currently hospitalized in the county with the illness.

She also said a 200% increase in food bank usage and businesses closing was more evidence the county needed to be able to reopen.

Later in the thread, Woodward suggested that Spokane County should be allowed to focus on protecting vulnerable populations while reopening. She also shes fighting for "...the woman who's new in her recovery and relies on working out to keep her focused on her sobriety," as well as professional photographers and those who can't celebrate their weddings with groups of people.

She said she is fighting for small business owners, such as those who own restaurants, who have stayed open in defiance of Inslee's order to stay afloat.

Woodward also pointed toward those making more on unemployment, stating that this will make it so employers have to hire less people and pay them more to get workers back to work.

The mayor ended the thread by saying she's received hundreds of emails, letters and calls from people that "just want to get back to work!"

RELATED: What would it take to reopen Spokane before Washington state? 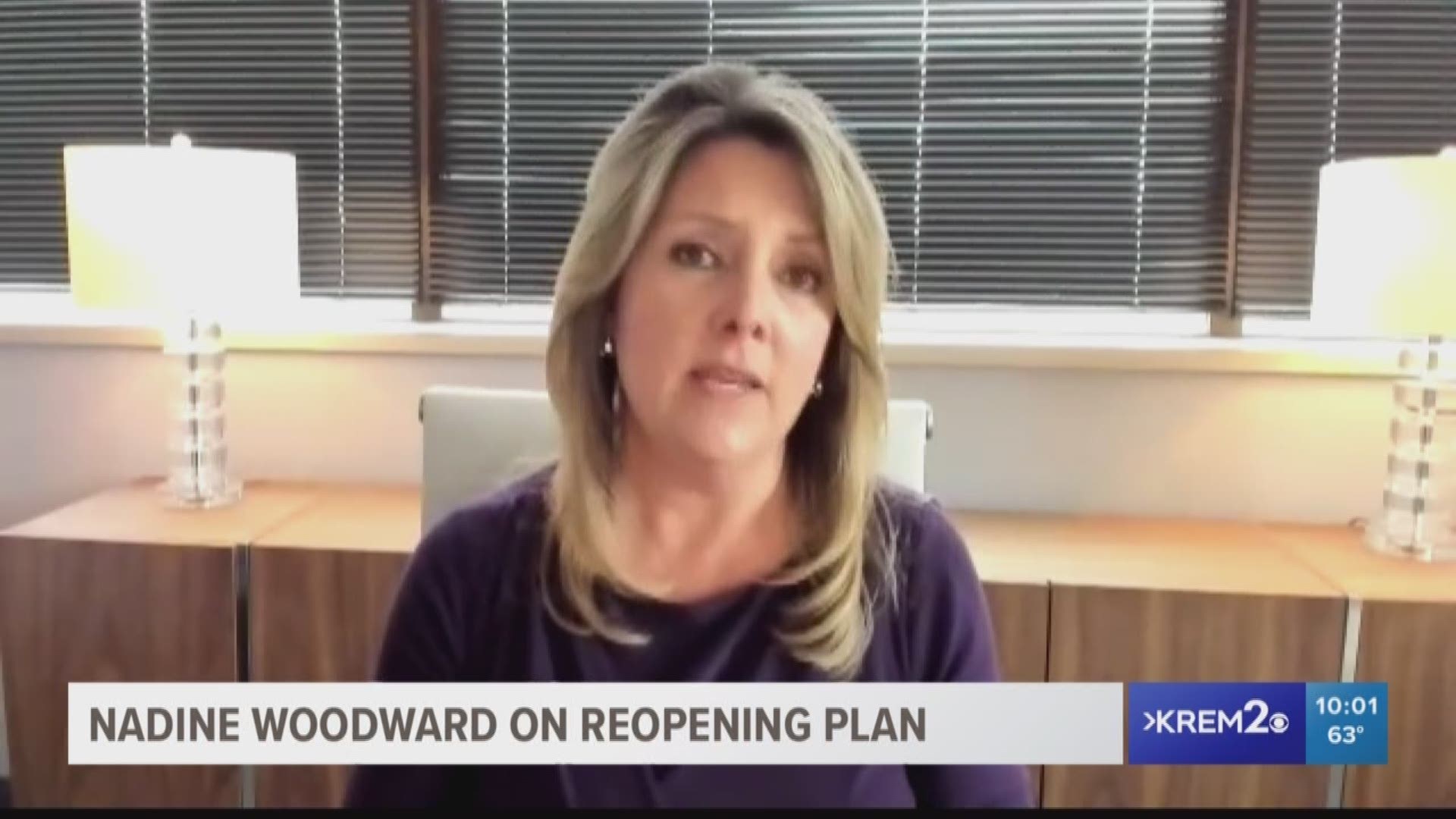