While Idaho is not yet near its healthcare capacity, some primary care physicians worry the recent spike in testing & cases could have a ripple effect on hospitals. 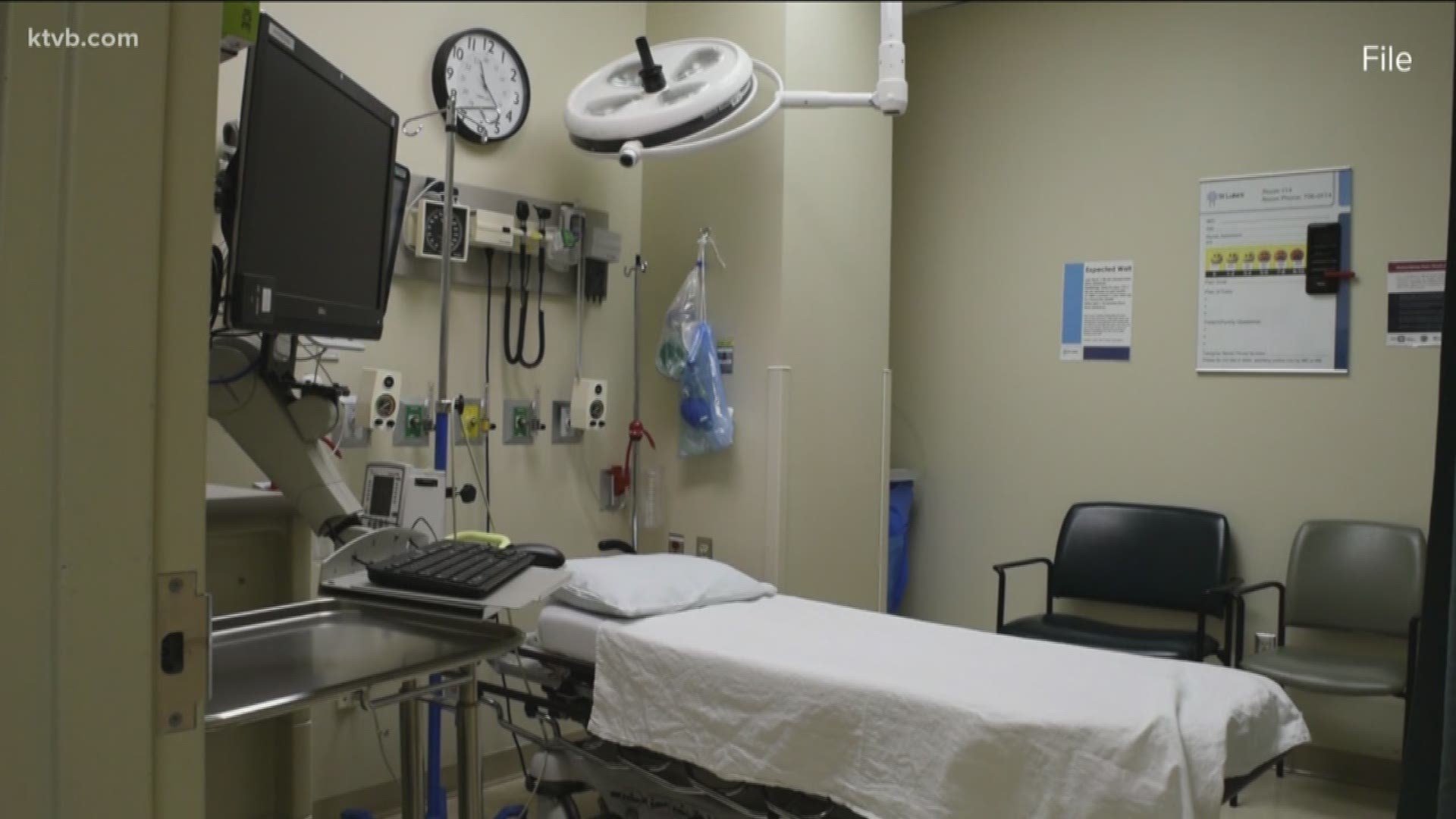 BOISE, Idaho — Across Idaho, there has been a slight increase in emergency room visits and hospitalizations for COVID-like illnesses.

In a press conference on Thursday, Gov. Brad Little and state health officials gave an update on the status of the virus and the state's reopening plan. With a recent spike in cases, Little announced the state would not be moving on from Stage 4 restrictions just yet.

State epidemiologist Dr. Christine Hahn said the positivity rate of COVID-19 testing in Idaho has increased and currently sits higher than 5%, which the state does not want to see. She also spoke about the rising trend in coronavirus-related ER visits.

"Although you can see in the graph there is a rising trend in the number of people going to the ER for COVID-like illness, which we don't want to see, we are still under the criteria, which we had set at about 20 [daily COVID-related ER visits] and you can see we are lower than that," she said.

When it comes to how many of those ER patients are admitted to the hospital, there is also a slight uptick, though not a significant increase on the state level.

"We wanted to see fewer than two per day," Hahn said. "The trend line is actually slightly upward but we barely squeaked under that. I'm concerned that when we look at this in a week or two weeks, I suspect we will be over that if things continue."

That increase is also a concern for primary care physicians like Dr. David Peterman, the CEO of Primary Health.

Over the past few months, Primary Health has tested around 11,000 patients in its clinics in Ada and Canyon counties. The number of people needing and wanting to be tested continues to increase.

"We're now testing close to 300 individuals per day and we're having 30 to 50 positives per day," Peterman said.

Since June 9, Peterman said their data shows a significant increase in the positivity rate.

Primary Health's data also found that 90% to 95% of the people being tested and coming back positive were in their 20s and 30s.

Central District Health also reports a jump in positivity rates, with the number of confirmed cases continuing to increase. It also shows the majority of those cases are a younger demographic, between 18 and 39 years old.

Both Peterman and Atkins said while those in the younger demographic typically tend to have less severe symptoms, they can spread it to the at-risk populations, who often end up requiring hospitalization.

"They're a segue," Atkins said. "There's no buffer for people to know once it gets into the at-risk population, we will see that increase and the clinicians who work in those primary care centers, particularly Primary Health, that's their biggest warning. They are seeing it move into other populations."

After a conference call with Saint Alphonsus and St. Luke's on Thursday, Peterman said both have had an increase in COVID-19 admissions.

According to Peterman, the increase in Ada County hospitalizations is not "at a scary level yet" but primary care physicians worry that could change in just a few weeks.

"We know from experiences in states like New York, California, over in the Yakima Valley right now, and frankly in Blaine County, we know that when we see the rise like we're seeing in our primary health clinics, that it then leads to increased rates in the ER," he said. "So for that reason, we're alarmed because this positivity rate is so high and it's gone up so fast, we're very concerned it's going to lead to those more critical admissions into the ICU, into the hospitals."

According to Hahn, the state hasn't reached anywhere near its healthcare capacity for ICU beds or ventilators.

But Peterman said if the rise in cases continues, he believes that spike in ER visits and hospitalizations is sure to follow. He is urging Idahoans to follow safety guidelines from health officials to try and prevent that from happening.

"We all know when there's a tornado warning we have to get in our basements - whether the tornado hits one house or 50 houses," he said. "What I'm saying, and what I think other primary care physicians are saying, is this is like a tornado warning. We're worried that our community members are not distancing, not wearing masks, circulating, we're fearful it's going to lead to - in a sense - a big tornado."

RELATED: COVID-19 among Boise's homeless community: 'We went to Stage 4 and then suddenly it started to rear its ugly head'