Follow along as we track the latest Idaho COVID-19 news from Nov. 27 to Dec. 5 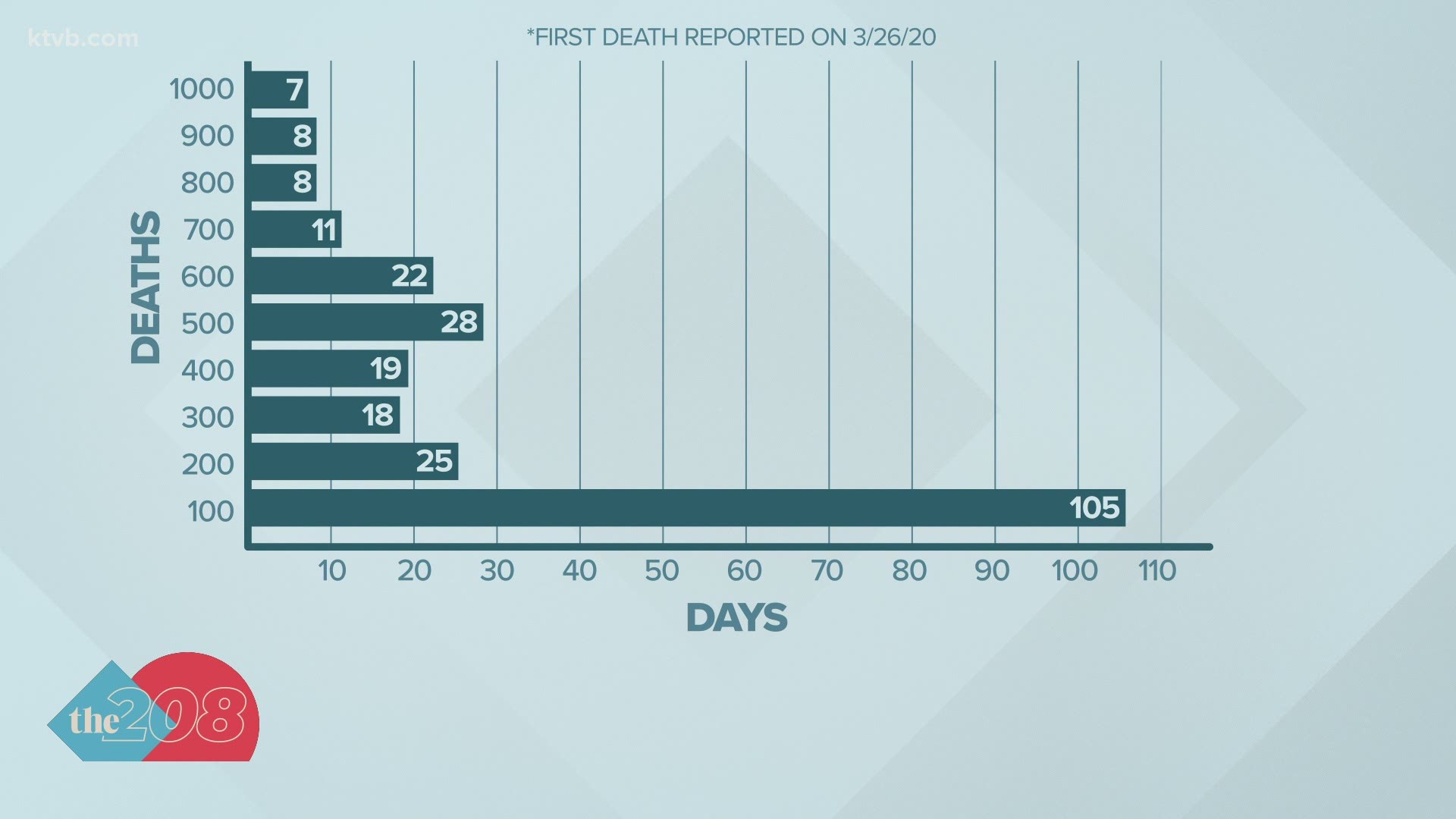 BOISE, Idaho — Click here for the most recent updates.

Based on data published by the Idaho Department of Health and Welfare and the state's public health districts, the Gem State added 1,011 confirmed and 212 probable cases and no new deaths on Saturday.

Idaho added 1,862 new COVID-19 cases to the statewide total. Friday's report is the highest number of new cases reported in a single day since the pandemic began. The previous record was set on Nov. 24.

14 deaths were reported on Friday. Here's how they break down by county:

Since the pandemic reached Idaho in March, more than 90,000 people have tested positive for the virus.

Also on Thursday, the state reported 23 additional coronavirus-related deaths, bringing the statewide death toll to 1,023. Eight of the deaths reported on Thursday occurred in Ada County and three each were reported in Canyon and Owyhee counties.

Ten employees are either quarantined or confirmed positive for the virus. The school district says they attempted to fill all the vacancies with substitute teachers, but were unable to get enough.

"At this point, we're only closing the Middle School for Friday," Superintendent Craig Woods said.

Athletic events will continue as normal. Meals will be available for pickup between 12:45 and 1:30 p.m. at Emmett Middle School and at Shadow Butte Elementary School from 12:45-1:30 p.m. Parents must come to the front door to pick up food; curbside delivery is not available.

Emmett School District, which has mandated face coverings for students and staff, says the majority of the infections have come from contact with people outside the school.

"We can control what happens in the schools during school time, but we are not able to stop the spread in homes and the community," Woods said.

Idaho set an unfortunate record on Wednesday when state and local health officials reported 34 coronavirus-related deaths in a single day. The state has now reached 1,000 deaths since the pandemic began earlier this year.

Here's how the deaths announced on Wednesday break down by county:

Also on Wednesday, health officials reported 1,094 new confirmed and 423 new probable cases, for a total of 1,517 cases. Nearly 89,000 people have tested positive for the virus in Idaho since March.

Here are the latest figures from the Idaho Department of Health and Welfare: 1,097 new confirmed, 459 new probable, for a total of 1,556 new cases statewide on Tuesday.

That brings the total number of confirmed cases since the start of the pandemic to 87,606. Overall, there has been 103,305 confirmed and probable cases.

1,349 new COVID-19 cases were reported in the Gem State on Monday. The Idaho Dept. of Health and Welfare added 975 new confirmed cases and 374 new probable cases to the statewide total.

446 Idahoans are currently in the hospital due to COVID-19, according to the latest hospitalization data from Nov. 28. Of that number, 110 are in the ICU, tying the record for the highest rate of ICU patients since Nov. 27.

An inmate at the Payette County Detention Facility passed away due to complications of COVID-19 on Nov. 25, 2020.

59-year-old Andrew Cremers was booked into the jail on Oct. 28, 2020, and was transferred to a nearby hospital when he began showing symptoms of COVID-19 on Nov. 20. Five days later, he passed away at a Treasure Valley hospital.

Cremers was in a cell with one other inmate at the time his symptoms appeared. That inmate is in quarantine and is not showing COVID-19 symptoms.

The Payette County Sheriff's Office is working with Southwest District Health to monitor, screen and test inmates within the jail.

Two deaths were reported Sunday. The Idaho Dept. of Health and Welfare reported one death each in Twin Falls and Cassia counties, bringing the statewide death toll to 921.

An estimated 40,461 recoveries have been made.

The Gem State, based on data published by the state's public health departments and the Idaho Department of Health and Welfare, added 649 confirmed and 159 probable cases of COVID-19 on Saturday. There are now 99'660 total and 84,827 confirmed cases of the coronavirus in Idaho.

Five new deaths were reported, three in Bonneville County and two in Ada County, which brings the state's death toll from the pandemic to 919.

Note: South Central District Health did not update their COVID-19 data on Thursday or Friday.

2,074 new cases were reported over the last two days. On Thursday, the Idaho Dept. of Health and Welfare did not update their numbers due to the Thanksgiving holiday but updated the totals on Friday.

With reports from Thursday and Friday, Idaho is now reporting 84,178 confirmed cases. In total, the state has 98,500 confirmed and probable cases.

13 new deaths were reported on Friday but it is not known whether these deaths occurred on Thursday or Friday. Three were in Bonneville County, two were reported in both Ada and Nez Perce counties, and one was reported in Boundary, Fremont, Latah, Lewis, Madison and Washington counties. There are now 914 deaths being reported in Idaho.

The latest hospitalization data from Wednesday, Nov. 25 reported 470 COVID-19 related hospitalizations, the highest ever reported in Idaho. Of that number, 92 are receiving intensive care.

An estimated 39,900 recoveries have been made.

The number of tests performed decreased from the previous week as well. During the week of Nov. 15-21, 39,922 tests were performed, down from 41,100 the week before.