Follow along as we track the latest Idaho coronavirus news with live updates. 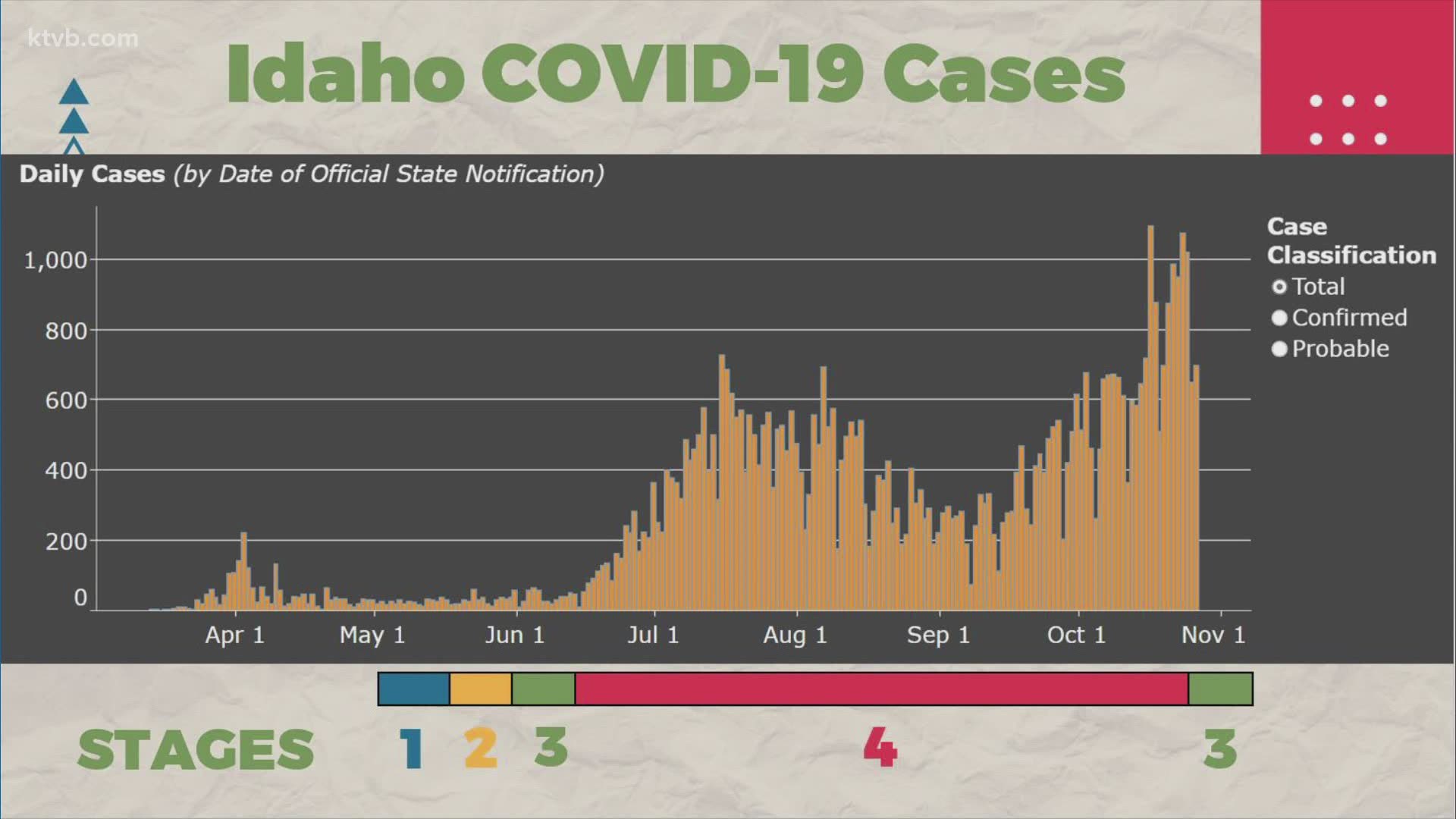 Three deaths were reported, two in Ada County and one in Bonneville County. There have been 630 deaths in Idaho due to COVID-19.

957 new cases of COVID-19 were reported in Idaho on Friday, bringing the number of total cases to 63,810 confirmed and probable cases. 758 of the cases reported Friday were confirmed and 199 were probable.

Nine deaths were reported on Friday, bringing the statewide death toll to 627. Three deaths were in Ada County, two in Canyon County and one death each in Jefferson, Kootenai, Lincoln, and Twin Falls counties.

The latest hospitalization data from October 28 showed rates decreasing slightly. 262 people have been hospitalized with COVID-19, down from the record high of 286 reported Monday. 74 people are currently in the ICU, down from 75 reported on Oct. 23.

29,556 estimated recoveries have been made.

Idaho health officials reported a single-day record of 19 coronavirus-related deaths in the state on Thursday. Eight of the deaths occurred in Ada County, while Bonneville, Kootenai and Twin Falls counties each had two. Bingham, Canyon, Gooding, Lemhi and Madison counties each reported one death.

The state has now surpassed 600 deaths statewide since the beginning of the pandemic.

This comes as Idaho continues to struggle with a  surge in new daily cases of COVID-19. On Thursday, state and local health officials reported 824 new confirmed and 195 new probable cases.

Of the new cases, Ada County had the most with 193, followed by Canyon County with 122 and Twin Falls County with 86.

The Idaho Department of Health and Welfare on Thursday released the latest positivity rates for the state. As of last week, Idaho's statewide positivity rate was 14%, up from 12.2% the week before. Officials said 28,542 tests were performed last week, compared to 28,777 the prior week.

Idaho health officials reported a total of 900 new COVID-19 cases on Wednesday. The latest numbers include 692 confirmed cases and 208 probable cases. Statewide, 54,461 people have tested positive for the virus since the pandemic began in March.

The state also reported 11 new coronavirus-related deaths on Wednesday - five in Bonneville County, three in Bingham County and one each in Cassia, Gooding and Minidoka counties. The statewide death toll now stands at 599.

The graphs below show the 14-day moving average of cases continues to trend upward as Idaho struggles to contain the spread of the virus.

For a closer look at the numbers, including a county-by-county breakdown, check out our interactive map and timelines.

Seven deaths were reported on Tuesday, bringing the statewide death toll to 589. Two of those deaths were in Kootenai County while one each was reported in Bannock, Bonneville, Jerome, Lincoln and Latah counties.

28,553 estimated recoveries have been made.

142 of those cases were in Ada County. 65 were in Bannock County and 56 were in Canyon County.

The state removed one death from Kootenai County's total.

The latest hospitalization data reported the highest rates of hospitalizations and intensive care beds being utilized since March. 272 people have been hospitalized with COVID-19 and 75 of those are in the ICU.

An estimated 28,309 recoveries have been made.

Note: Not all health districts update their numbers over the weekend

654 new cases were added to the Gem State's total number of COVID-19 cases. 530 of those cases are confirmed while the remaining 124 are probable.

One death was reported in Ada County, bringing the state's death toll to 573.

An estimated 28,056 recoveries have been made.

Note: Not all health districts update their numbers over the weekend

Four deaths were reported on Saturday, bringing the statewide death toll to 572.