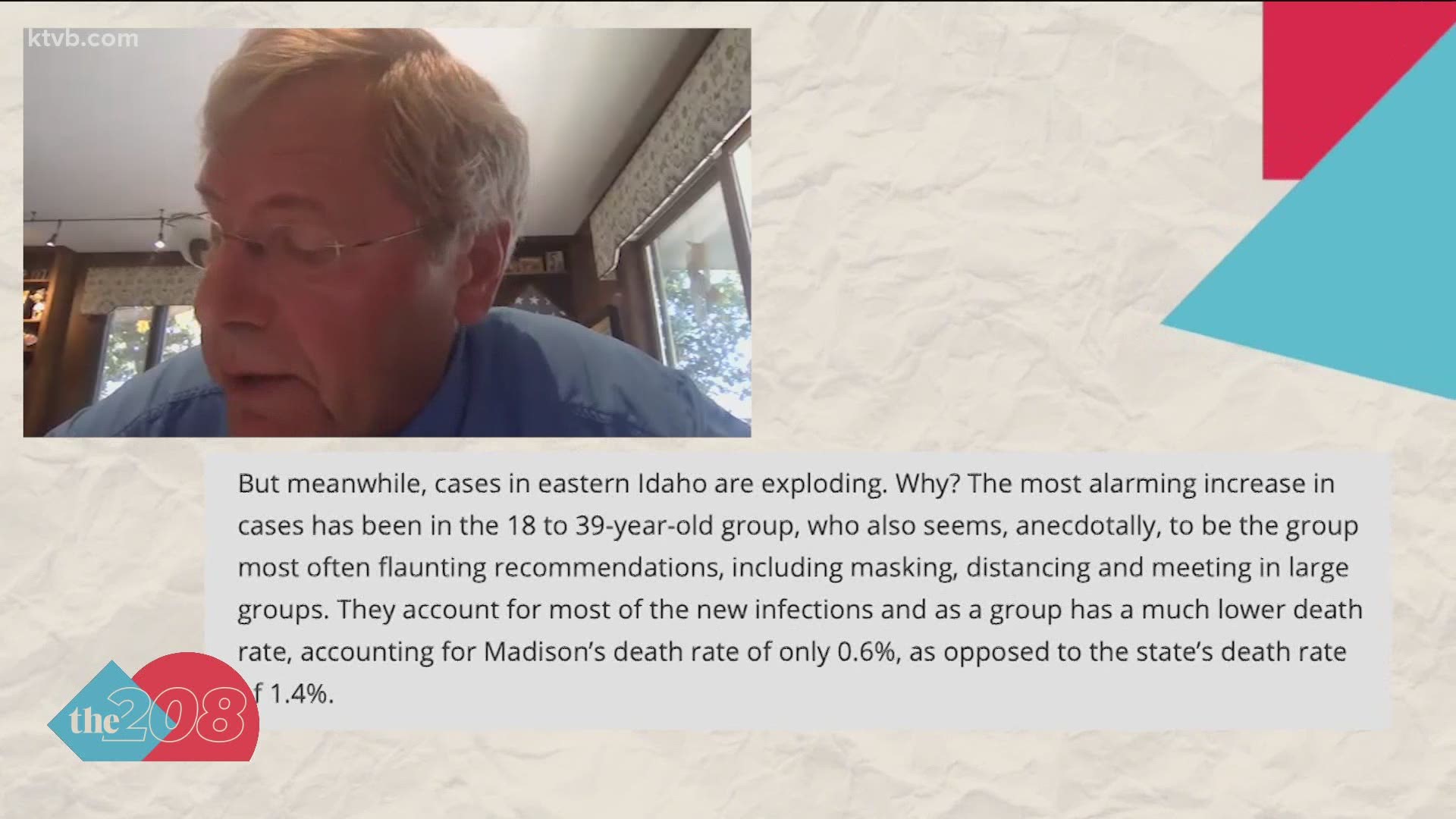 The Gem State added 210 probable and 467 confirmed cases of COVID-19, based on data collected from the Idaho Department of Health and Welfare and public health districts around the state. There 52,582 total cases and 46,882 confirmed cases of the coronavirus in Idaho.

An estimated 25,679 of those confirmed cases are presumed to have recovered.

Idaho set a new record for the highest 14-day average of new cases reported per day. In the last two weeks, Idaho has reported an average of 634.3571 total cases per day. Since Sept. 21, the 14-day average has almost consistently grown each day, with Sundays usually bringing it down or evening it out for a day.

The Gem State added a record-shattering 749 confirmed and 231 probable cases on Friday, which sets the record for most cases added in a single-day with 980 total cases. There are 51,704 total cases of the coronavirus in Idaho, 46,415 of which are confirmed cases.

Eight new deaths were reported, with two deaths each in Canyon and Caribou counties, while Bannock, Bingham, Kootenai and Twin Falls counties all reported one new death each. Idaho's death toll from the pandemic is now 529, which is more than the populations of either Idaho City, Garden Valley or Riggins.

Recoveries did increase to an estimated 25,457.

456 total cases are being reported on Boise State's campus. The majority of those cases, 278, are in off-campus students. 161 residential students have tested positive for COVID-19, as well as 17 faculty and staff members.

22 on-campus isolation beds are occupied out of the 153 on campus.

Boise State University on Thursday announced a plan to furlough more employees due to financial challenges caused by the coronavirus pandemic.

The furlough program will apply to all faculty on 9-month to 11-month contracts earning at least $40,000 per year, Boise State said in a news release. The same criteria that were used for the furloughs over the summer will apply to the new round of furloughs.

Pay bands and number of furlough days are:

The university's Office of the Provost and Faculty Senate are discussing the time frame for the furlough period, the size of furlough time units, and time reporting procedures.

"Being required to take mandatory furlough time while dealing with other grave challenges is especially painful," Interim Provost Tony Roark said in a statement. "I appreciate the sacrifices that everyone has made and is making to keep the university community on track to recover from the pandemic in a position of strength and service to our mission."

The savings resulting from the program are estimated to be $1.1 million. The university has not said how many employees the furloughs will affect.

Idaho's surge in new COVID-19 cases continued on Thursday with local health districts reporting 586 new confirmed and 146 new probable cases. The state has now surpassed the 50,000-case mark for confirmed and probable cases since the beginning of the pandemic.

Of the new cases, Ada County had the most with 108. Twin Falls County had 83 while Canyon County had 73.

Four additional deaths were reported on Thursday - two in Bonner County and one each in Bingham and Shoshone counties - bringing the overall death toll to 521.

The state has also released new data on the state's COVID-19 test positivity rate, which last week was 11.4%, up from 10.3% the week before. State health officials report that 25,292 coronavirus tests were performed last week, up from 25,022 the week before.

The state of Idaho is reporting 486 new confirmed and 154 new probable COVID-19 cases on Wednesday, continuing a recent surge that has seen more than 400 new confirmed cases per day for more than a week.

Three additional coronavirus-related deaths were also reported on Wednesday - one each in Bonneville, Kootenai and Payette counties - bringing the statewide death toll to 517.

Of those hospitalized, 56 of them were in the ICU.

There have now been 44,594 confirmed cases of COVID-19 in Idaho since the beginning of the pandemic.

Of the new cases on Tuesday, Bannock County had the most with 68. Madison County was close behind with 67 and Bonneville County had 52.

The graphs below shows a steep uptick in new cases over the last month.

Also on Tuesday, four additional coronavirus-related deaths were reported. Two of the deaths occurred in Bingham County, while Ada and Twin Falls counties had one each. The statewide death toll now stands at 514.

For a closer look a the numbers, including a county-by-county breakdown, check out our interactive map and timelines.

All other counties overseen by CDH- Valley, Elmore and Boise counties- remain in the yellow category.

Despite the move, a West Ada survey found the majority of parents support students returning to school full-time while in the yellow category and part-time in the red category.

Note: Most public health districts do not update their COVID-19 numbers on weekends and holidays.

Idaho added over 500 new cases to its total on Indigenous People's Day, 464 of which were confirmed and 50 probable. Idaho is now reporting 43,932 total cases. Of that number, 48,663 are confirmed.

Three deaths were reported, two in Ada County and one in Canyon County. The state's death toll is now 510.

The latest hospitalization data from October 10 reported 187 people currently hospitalized with COVID-19, 54 of those in the ICU.

24,523 estimated recoveries have been made.

No deaths were reported today. The state's death toll remains at 507.

An estimated 24,304 recoveries have been made.

The coronavirus in Idaho continues to spread at an increasing pace after 486 confirmed and 103 probable cases were reported. While Saturday's 589 total is the most cases reported in a single day, which Friday's 821 total cases reported holds the record for, it does set a new high 14-average.

Idaho now has 47,701 total number of cases, according to the Idaho Department of Health and Welfare. KTVB's data shows there have been 43,044 confirmed cases in the state since the pandemic began in March.

As of Saturday and based on KTVB's tracking of the virus, Idaho has added an average of 534.9286 total cases per day over the last 14 days. It is a new record on an upward trend of the next wave of sorts in the coronavirus pandemic.

One new death was reported in Washington County, bringing the state's death toll from the pandemic to 507.

Idaho reported 821 total cases on Friday, breaking the record for the most cases of the coronavirus added in a single day since the pandemic began in March. The grand total is based on data released by the Idaho Department of Health and Welfare and the public health districts across the state.

679 cases reported were confirmed and 142 were probable, which pushes Idaho's total number of cases to 47,088.

KTVB's tracking shows 821 total cases versus the state's 662 due to some health districts in Eastern Idaho updating their statistics with newer data after the state releases its own.

Two new deaths were reported, bringing the state's death toll from the pandemic to 506. One death was reported in Bonneville and Gooding counties.

The Gem State added 421 new confirmed and 153 new probable cases of the coronavirus on Thursday, bringing the total number of cases to 46,426. Of those, 41,879 are confirmed cases.

Two new deaths were reported, one each in Bonneville and Cassia counties. Idaho's death toll from the pandemic is now 504.

Of the new cases, 84 were in Ada County, 78 were in Canyon County and 62 were in Twin Falls County.

The graph below shows Idaho's steady upward climb in new cases since mid-September.

Also on Wednesday, the state is reporting 10 new deaths, including five in Kootenai County. Bannock County and Bonneville County each reported two deaths, while Lewis County reported one.

Idaho has now surpassed the grim milestone of 500 coronavirus-related deaths since the pandemic began.

The state has released new data on the number of hospitalizations due to COVID-19. As of Monday, 191 people statewide were hospitalized with the virus, and 41 of them were in the ICU.

The Gem State reported 611 new confirmed and 106 new probable cases on Tuesday, bringing the statewide total number of cases of COVID-19 to 45,082 and 40,903 confirmed cases.

The 717 new cases is the second-highest single-day total since August 6, when 763 total cases were reported.

Five new deaths were reported, two in Twin Falls County and one in Ada, Caribu and Kootenai counties each. Idaho's death toll from the pandemic is now 492.

Ada County continues to be one of the state's largest hotspots, with 78 new cases reported, followed by Madison County's 61 new cases and Twin Falls County's 65.

4:50 p.m. A man in Twin Falls County dies from COVID-19, youngest person to die from it in Idaho

The South Central Public Health District announced on Tuesday afternoon that a man in his 20s in Twin Falls County died from a COVID-19-related illness. Officials said this is the first COVID-19-linked death under the age of 30 in the Gem State since the pandemic began in March.

The man had underlying health conditions, according to officials.

"Some of these conditions that place people in our community at high risk aren't obvious to the people around them. Conditions like diabetes, heart disease, or lung problems can be invisible to the public and are more common than you might imagine," said SCPHD epidemiologist Tanis Maxwell in a statement. "That's why taking steps to protect everyone around us from any illness we might be carrying is such an important step in slowing the spread of this disease and saving lives."

The health department did not release any further information about the man.

Five deaths were reported today. One of the deaths occurred in Franklin County, its first COVID-related death. Ada, Bannock, Cassia, and Kootenai counties all reported one new death. The statewide death toll is now 487.

An estimated 23,115 recoveries have been made.