"I believe in my heart that what the Idaho Legislature is doing is harmful to our people and wrong for Idaho," Little said. 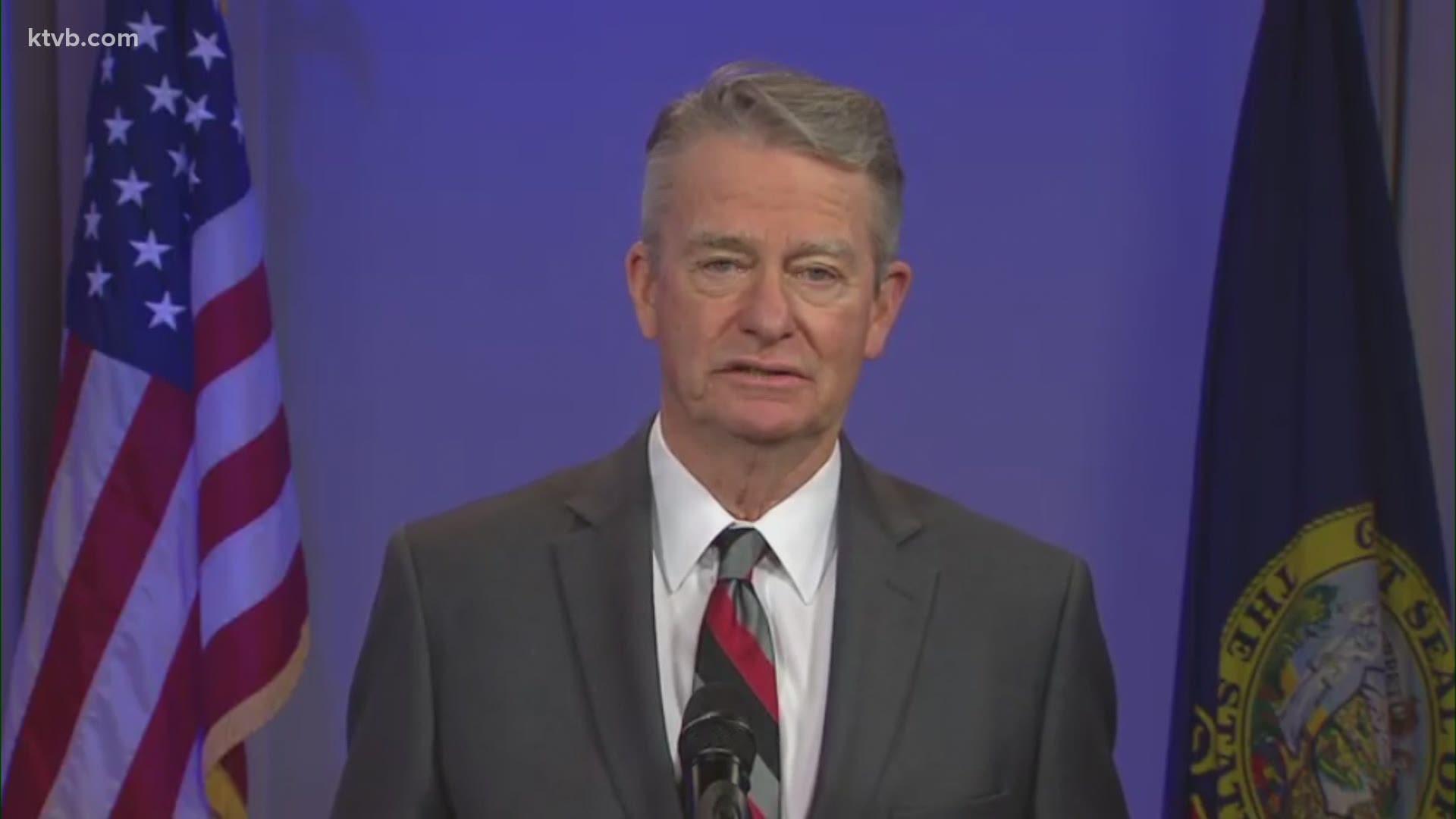 BOISE, Idaho — Gov. Brad Little lashed out at the Idaho Legislature Friday saying their efforts to limit his ability to make emergency declarations during the COVID-19 pandemic will put more Idahoans at risk of getting the virus. But the backlash from his own party soon followed his strong statements.

Several bills are making their way through the statehouse that would curb the executive branch's authority in times of emergency.

One bill before the Idaho Senate would end the current state of emergency.

"Let me be clear, undeniable, COVID-19 is an emergency, Hundreds of Idahoans have died and many more have been horribly sick," Little said. "Many Idahoans still face the same terrible risk. The COVID-19 emergency declaration was requested by Idaho communities and is critical for Idaho to receive federal assistance."

Little says Idaho stands to lose tens of millions of dollars in federal emergency money that would be used to assist in the fight against the virus.

"The seriousness of this situation demands that I speak up. I believe in my heart that what the Idaho Legislature is doing is harmful to our people and wrong for Idaho," Little said. "I urge my partners in the Legislature to stop the political games and do what is right for the people of Idaho. Abandon the myth that emergency declaration somehow shuts down Idaho."

"Just as the Guard begins distributing and administering the vaccine, it is not the time to stand down," Garshak said. "Canceling Idaho's emergency declaration would do just that."

He said that in order for Idaho to respond to domestic national emergencies beyond 72 hours, a formal disaster declaration is required by law. And it is also necessary to receive state and federal disaster response money.

At the end of his press conference, the governor reached out to Idahoans with a final plea.

"I am asking for your help. Please join me, contact your state legislators and tell them not to take away one of our strongest tools to end this pandemic and get back to normal. Tell them Idahoans lives and livelihoods depend on it," Little said.

Rep. Megan Blanksma (R-Hammett) told The 208 that the governor's comments were "inflammatory."

"I think the governor used a lot of loaded language when he spoke this afternoon and I think what we're trying to do here is a slow deliberative process," she said. "And the consequences and the warnings he was using, I was just disappointed because we're midway through the process and it's been our goal all along to work through the process both the House and Senate and the governor and so I was disappointed in the statement."

She added that while some Republicans don't want to take any federal money, they are trying to address their constituents' issues with the process. Blanksma also said there's a concern that the legislative branch of the government wasn't involved in the process of spending a billion dollars in federal aid.

House Republicans issued this statement Friday afternoon in response to the governor's comments:

Members of the House Republican Caucus will continue to work to address the concerns of the Idaho families whom they represent. The inflammatory comments from the Governor's office do nothing but complicate the process. The life-altering concerns revolving around the COVID-19 emergency continue to be in the front of our minds. Our members are working on various forms of legislation to help the state on its road to the recovery that Idahoans have been demanding for months and we call on the Governor to work with us in this process.

And over in the Idaho Senate, Republicans had this response:

"We appreciate the Governor's concerns, but it categorically maligns legislative efforts as the Senate works diligently to address the much-needed rebalancing of power. The Senate has not advanced any legislation that would jeopardize federal funding. We are working to address the genuine concerns of many Idahoans while at the same time maintaining federal dollars for our National Guard response, critical assistance to our rural hospitals, school districts, and other community COVID-19 response needs. We look forward to working with the Governor and our colleagues in the House to serve our state during this challenging time. Now is the time for commonsense solutions."

Meanwhile, nine CEOs representing many of Idaho's largest employers, issued a statement showing their support for the governor:

"Idaho Governor Brad Little recently issued a stark warning about the efforts taking place in the Idaho Legislature to rescind the federal emergency declaration for Idaho's coronavirus response. We join the governor in his opposition of this effort and share his concern for the grave consequences it would have for Idaho businesses and our employees.

We all want to do something — take some action — to move us closer to the normalcy we long for. But this legislation, rather than jumpstarting that transition, runs the risk of causing Idaho companies to fall behind our neighbors and industry peers in our recovery efforts.

Many Idaho businesses continue to provide critical services, products, food and jobs to our communities through these difficult times. But the only way our companies are able to do that is by staying focused on supporting the health and safety of our employees.

The resources provided by the federal emergency declaration help us do that, and we're continuing to look to those resources as we plan for vaccinations and economic recovery throughout our state. The declaration does not shut us down or take away our rights. In fact, the federal support helps keep us open and forging our own path toward recovery.

We all want the pandemic to be over, but removing the emergency declaration and the federal support that comes with it will not make that happen. As we begin to see the light at the end of the tunnel, we join Governor Little in asking our legislature to stay the course and keep the structures in place that can help our Idaho businesses, the people they employ, and the families that depend on them."

RELATED: Idaho COVID-19 Vaccine Advisory Committee clarifies who will be vaccinated in Group 2

The committee voted to clarify who is included in priority subgroups as the COVID-19 vaccine rollout continues across the state. Beginning in February, Idahoans 65 and older will be able to sign up to get vaccinated.