State epidemiologist Dr. Christine Hahn took part in a question and answer session to provide us with more facts about the spread of COVID-19. 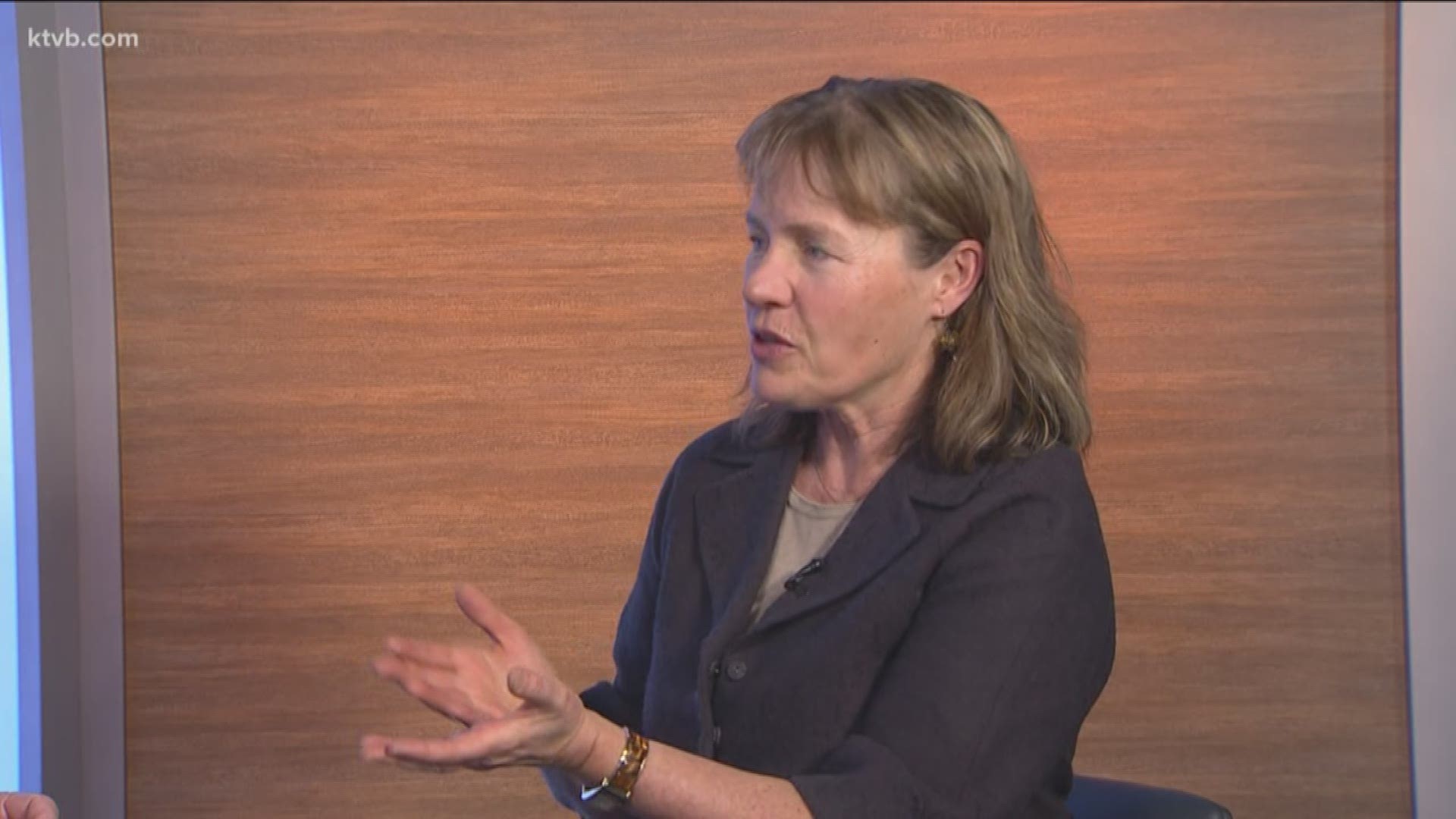 BOISE, Idaho — State epidemiologist Dr. Christine Hahn has been very busy in the last couple of weeks. She dropped by the KTVB studios Thursday to help us understand fact from fiction when its comes to the spread of the coronavirus.

There are still no confirmed cases of the coronavirus in Idaho.

Here is the full text of the question and answer session with Dr. Hahn.

Question: How do you frame this pandemic? When somebody says to you, Dr. Hahn how should I live my normal daily routine? What should I be doing?

Answer: That is changing daily. A week ago, we were reassuring the public that we didn’t think there was a need at that point to cancel things and to make major changes other than taking proper precautions as hand washing and so forth. Now as you’ve heard this week, I think things are changing, partly because of the growing number of cases in Washington, more cases in Utah, Oregon, that type of thing. I think we are very aware people travel back and forth. It is likely the virus may be here already we just haven’t detected it yet. We’re starting to say, ‘hey maybe it is time to try to prevent this virus from spreading quickly, which we are sure is here or is going to be here soon.’ So we are telling people to start changing their life in a way that we weren’t even a week ago.

Question: There are rumors that Saint Al’s or St. Luke’s have a patient or patients in both facilities that are currently being quarantined.

Answer: To be clear, we do not have any patients in Idaho that have been diagnosed. We have patients who are in facilities around the state, in hospitals around the state, or that have been tested in their doctor’s office, where we might have tests that are pending right now at the state lab and we’ll know by this evening the results. So, it is possible that hospitals have patients that they’re testing, and to be cautious they’re putting those patients in isolation until they know the answer because they don’t want to expose anyone else, so that’s certainly possible. But when the test results come back, and if it’s negative, then they move those patients out and put them in a regular bed, that type of thing. That kind of stuff is happening all the time in hospitals, but it makes it hard for people to understand what’s going on when they see people whisked into isolation and what’s going on.

Question: Certainly, you are bracing for what no doubt, if your looking at this practically, will be a confirmed case, it’s just a matter of time in Idaho.

Answer: Correct. I’m not a betting person usually but I would bet we will see a case in the coming days or weeks, it’s really as we see it popping up around us we now people are continuing to travel back and forth, it’s only a matter of time.

Question: How prepared are our medical centers to treat confirmed patients?

Answer: I think, a couple things, that we are a small state, you know population wise, and we have many hospitals that are quite small, and we have hospitals that are large metropolitan centers, the level of preparedness for a big event like this is really varied. But, because of the 2009 pandemic, because of the Ebola scare where hospitals really started thinking about injection prevention, and because of SARS back in 2003 where suddenly we were saying, ‘hey there’s some respiratory viruses going around,’ and people started putting masks on, people in waiting rooms started emphasizing hand sanitation. I think we’ve come a long way. That said, hospitals are taking this time, these weeks, to really get ready, and I know a lot of them have been exercising, practicing protection and that type of thing.

Question: How does the testing process work? Do we have enough tests right now? If not, when will we get them and how?

Answer: So right now in Idaho, up until late last week our state public health lab was the only lab in the state authorized to do these tests. And they’ve been able to keep up with all the tests coming in. So we felt like we’ve been able to test the people that need to be tested. We’re very fortunate as of late last week now we have three commercial labs in the region that can test Idaho patients, and those tests can go like any other test from hospitals or clinics to private sector. So, I think we have good capacity, a lot better than we did a week ago but we need to be testing more people, we know that it’s been very frustrating for the public in general, there are people that are sick and haven’t been able to get tested. I think that’s changing very rapidly.

Question: Certain people are more at risk because of the conditions they have. What are those? And for those people with those conditions what should they be doing to prevent from getting this?

Answer: So people who are at high risk, we know this mostly from data out of China, but we are starting to the same thing out of Washington state and in Europe, the people who are at highest risk seem to be elderly people, also people with underlying health conditions, and obviously those can overlap. People who are older tend to have more underlying health conditions. So that means lung disease, heart disease, kidney disease, maybe your immune system being suppressed because of being on medication after a transplant or you’re on cancer treatment. Those people who have those kinds of health conditions need to take special care. Couple things that we’re recommending, kind of common-sense things, all of the things that we are saying to everyone else, do those, of course, hand hygiene. But really, for example, trying to stay away from large groups. Maybe hitting the grocery store when it’s more quiet for people around. Trying to avoid crowds and certainly avoiding anyone who is sick. I remember when I was a kid you went to school every day whether you were sneezing and sniffling or not. The ethic has really flipped and now people are saying ‘that’s not the way to go anymore,’ when people are sick they need to stay home, and if you’re vulnerable you need to tell sick people “I can’t be close to you right now.”

Question: With spring break right around the corner, what are your recommendations for traveling? By air, staying in hotels, eating in public places. What do you tell people about that?

Answer: This is a very highly personal decision. I think there are some people that are going to want to continue with their plans. And for many places, many parts of the United States for example, they’ve had, like Idaho, very few cases or no cases, it might be perfectly safe to travel there, and I would just bring the hand sanitizer and be particularly mindful of large groups but keep up with your plans. Other people may not feel so confident. They may want to cancel or postpone. Sometimes the finances play a role in that too, right? So, it’s a complicated decision. We just heard yesterday from the president that travel from Europe is being banned. I believe that Americans can still travel back and forth, I’m trying to verify that today. But I think Europeans, for example, won’t be coming here. So things are changing very rapidly. But I think that each family has to make that decision based on your own, are you healthy? Do you have any health conditions? If you are not going to enjoy your vacation, why do it?  Maybe it’s time to postpone it and go in the fall when hopefully things are better.

Question: What about the temperature of the water I’m washing in. Does that matter?

Answer: There are no silly questions. It’s a new virus and there’s a lot we don’t know about it. To my knowledge that shouldn’t affect anything. As you walk through the world, let’s say you’re around somebody with the coronavirus, so you can imagine if I gotten contaminated somehow with it, that could be but until it gets into your nose or mouth, it’s not going to hurt you. Really, temperature of water, your showers, washing clothes, I don’t think that’s gonna make a difference. It’s more about keeping your hands away from your face.

Question: Seeing a lot of news on people having the virus and being infectious while showing zero symptoms. Should I get tested for precautionary measures?

Answer: So that’s been a very confusing area with this virus. There were some early reports of asymptomatic people transmitting the disease. The best we understand now from the science is that’s probably not common, and people who are asymptomatic are probably not a big source of spread. The other thing is that we don’t know, let’s say you’re feeling good you or me, and we go and get tested and we’re negative, it doesn’t tell us much because we could pick up the virus tomorrow. So we don’t recommend testing for asymptomatic people, it doesn’t really help you much.

Question: Why are we in a panic over this? Isn't it going to eventually go through the world's population just like any of virus of its type, like the flu?

Answer: Yes. We’re in a panic about this because it’s new and the unknown is always frightening because we don’t know what to expect. Yes, it will probably, it seems like it’s going to circulate around the world. And many of us might get it, might be just fine and go on, but none of us knows who that will be, right? And we know there are vulnerable people that are at very high risk. All of us have a loved one, maybe who is older, maybe has health problems, maybe has asthma or lung disease, and none of us want to see anything really bad happen to them.

RELATED: What coronavirus precautions are underway in Idaho, even though there are no confirmed cases?