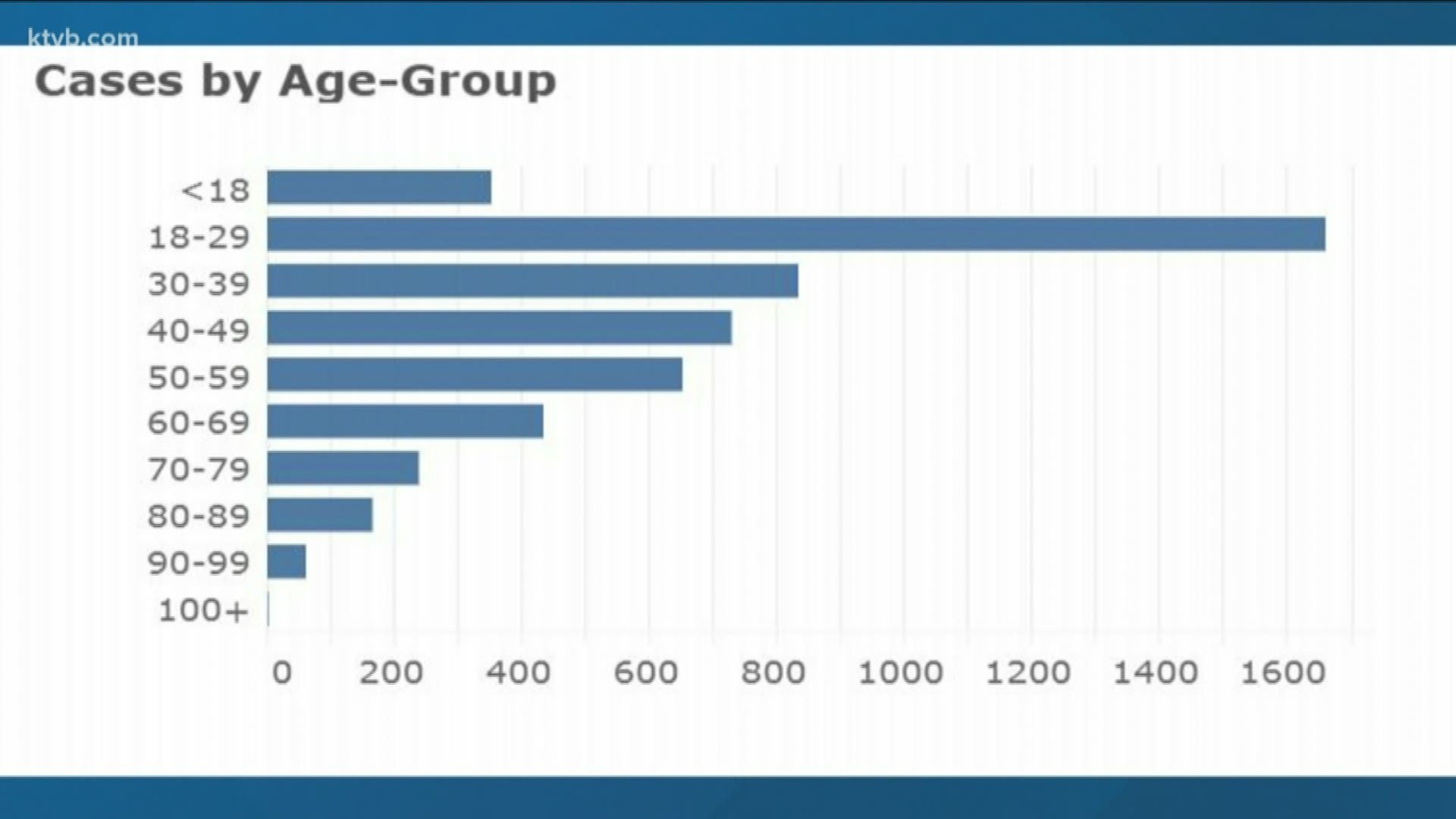 We're closely tracking Idaho's number of deaths and cases of the novel coronavirus, COVID-19, as well as what's happening as Idaho reopens.

The state and local health districts are reporting 320 new confirmed cases and 24 probable cases of COVID-1 throughout Idaho on Tuesday. It's just the second time, Idaho has topped 300 cases in a single day. The other was just four days ago - on June 26.

Statewide, there have now been 5,575 confirmed cases and 4,233 recoveries, according to the state's website.

Nampa Parks and Recreation announced Tuesday that this year's Nampa Festival of the Arts will be canceled over COVID-19 concerns.

The festival, which has run for 33 years, was scheduled for Aug. 8 and 9 at Lakeview Park. Parks and Rec officials say the decision to cancel was difficult, but necessary.

"Our hope was to implement necessary guidelines to protect the safety of everyone attending, but we ultimately realized the risk is too great with COVID-19 cases rising in the Treasure Valley," said Director Darrin Johnson.

Since the state or public health district release COVID-19 stats on Sunday, numbers for Sunday and Monday were released Monday night.

Bear Lake and Oneida counties reported their first-ever cases, leaving four of Idaho's 44 counties without any confirmed cases of the coronavirus.

No new deaths were reported, leaving the statewide total at 91 deaths.

4,073 people are presumed to have recovered from COVID-19, according to the Idaho Department of Health and Welfare.

Organizers have decided to cancel the 2020 Festival. They said the decision was not made lightly, but is necessary for the safety of the community and all participants.

Registration or fees already will be refunded within a few days.

For the sixth-straight day, the Gem State added over 100 new coronavirus cases, based on data from health districts and the state. On Saturday, a total of 115 confirmed cases were reported, with 10 more cases listed as probable.

Ada and Canyon counties combine for over 2,300 of the state's 4,805 confirmed cases.

See more in our interactive map and timelines tracking coronavirus case trends across Idaho, as well as the 14-day average state officials look at as a factor for reopening stage criteria.

Public health officials announced on Friday night that a man in his 60s is the first confirmed coronavirus-related death In Washington County.

The Panhandle Health District said the man had underlying health conditions and was hospitalized at the time of his death.

The Gem State added 290 confirmed and 20 probable cases of the coronavirus on Friday, according to data from the Idaho Department of Health and Welfare and the state's health districts. This brings Idaho's total of confirmed cases to 4,690 and to 5,148 confirmed and probable cases.

No new deaths were reported.

Over 3,800 cases are presumed to have recovered, according to the state.

Since Sunday, the state reports no one has been admitted to the hospital.

See more in our interactive map and timelines tracking coronavirus case trends across Idaho, as well as the 14-day average state officials look at as a factor for reopening stage criteria.

The health department that oversees part of the Treasure Valley, including Ada County, held an emergency meeting with the state Board of Health on Friday afternoon.

An attorney for the health district addressed that city officials violated an open meeting violation last Saturday, which voids their order of rolling back Ada County to Stage 3 last week. The reversal could be rectified with a new order in this meeting.

Dr. Ted Epperly then motioned to move Ada County to Stage 3 and included bars and nightclubs to close. It was approved unanimously.

High schools in the Boise School District will suspend sports workouts and practices during the summer in response to the rising number of coronavirus cases in Ada County.

"This action taken now, will improve our chances that scheduled fall practices and games may resume in August," Borah High School athletics tweeted.

Boise State University is extending campus facility closures through July 5 after more people at the school tested positive for coronavirus.

University officials say they have been notified of 20 new positive cases at Boise State, with the results of dozens more tests still pending. The school had announced eight positive cases earlier in the week.

Boise State says that the spike in transmission of coronavirus in Boise currently is straining testing capacity, adding that "unanticipated delays in processing and communicating COVID-19 test results" are further complicating the issue.

Students and staff on campus are urged to wear face coverings, practice physical distancing, and stay home if they feel sick or have been exposed to someone with COVID-19.

All three infected inmates were living in the same housing unit on one tier of E Block at ISCC.

Prison officials say that they are in the process of tracing contacts with staff and other inmates, and that the prison will be "buttoned down pretty tight" until that is finished.

Inmates who were recently transferred to other prisons from ISCC will be placed in quarantine until coronavirus can be ruled out.

So far, 13 staff members across IDOC have tested positive for the virus, with eight of those infections coming this week. Another 27 staff members are currently on medical leave after having close contact with an infected staffer.

IDOC is planning to roll out mass testing in the prisons, starting with E Block at ISCC on Monday.

Staffers have also been mandated to wear masks in the prison going forward.

"It’s worth noting just how fortunate we’ve been to be able to hold the line as long as we did. 103 days. That’s how long we were able to keep COVID-19 out of our system," IDOC Director Josh Tewalt wrote. "It should be a source of pride, but it also bought us valuable time to prepare. It bought us valuable time to learn from how other states approached outbreaks in their systems. And it bought us critical time for testing capacity and other resources to be developed. We’re ready, and now the real work starts."

Central District Health confirmed that three additional Valley County residents have tested positive for COVID-19, bringing the total number of cases in the county to six. One of the recent cases was confirmed on Wednesday, while the other two were confirmed on Thursday.

The health district said it has confirmed evidence of community transmission, which is determined when an individual has not had contact with a known infected person or recently traveled.

One of the infected individuals confirmed this week required hospitalization, CDH said.

With community transmission identified in many counties throughout Idaho, and given Valley County's robust tourism, which brings in Idahoans from other counties, and residents of other states, officials said it is more important than ever that people follow public health recommendations to prevent the spread of COVID-19.

"Valley County sees a considerable amount of tourism with people coming to enjoy our communities," said Elt Hasbrouck, Valley County commissioner and CDH Board of Health member. "We want to urge both members of our community and those visiting to protect one another. Wear face coverings in public and practice physical distancing. Let's look out for one another so we don't see continued spread and potentially harmful impacts to the health of our residents and local economy,"

Central District Health reported on Thursday the first confirmed case of COVID-19 in a Boise County resident. According to the health district, the man in his 30s reported having mild symptoms and is recovering at home.

"We have been very fortunate in Boise County to have been at zero cases this far into the pandemic," said Ryan Stirm, Boise County commissioner and CDH Board of Health member. "Now, more than ever, as we watch cases climb in neighboring Ada County and many other nearby counties, we need to be diligent about protecting our community which hosts visitors, travelers and recreation enthusiasts every day."

Just days after Ada County moved from Stage 4 back to Stage 3, new coronavirus numbers show the county continues to move in the wrong direction. Information released by Central District Health shows 112 new confirmed cases in the state's most populous county. That breaks the county's record set on Wednesday of 102 confirmed cases. Neighboring Canyon County had the second-most cases in the state on Thursday at 53.

Statewide, there were 217 new confirmed cases, and an additional 20 new probable cases. The state's death toll held at 90, and the state reports that 3,712 people have recovered from the virus.

For a closer look at the numbers, including county breakdowns and trends, check out our interactive map and timelines.

12:00 p.m. - Governor Little announced the state will remain in Stage 4 and urged people to be vigilant

During a news conference at the Idaho Statehouse, Governor Little announced the state will remain in Stage 4 for at least two more weeks. With positive cases trending upward in June, the state did not meet the criteria to advance past Stage 4.

The announcement came after Central District Health moved Ada County back to Stage 3 in response to an alarming increase in cases. Little says health officials will evaluate the situation at the end of the two week period and determine the next steps.