Follow along as we track the latest Idaho COVID-19 news with live updates from Dec. 9-19. 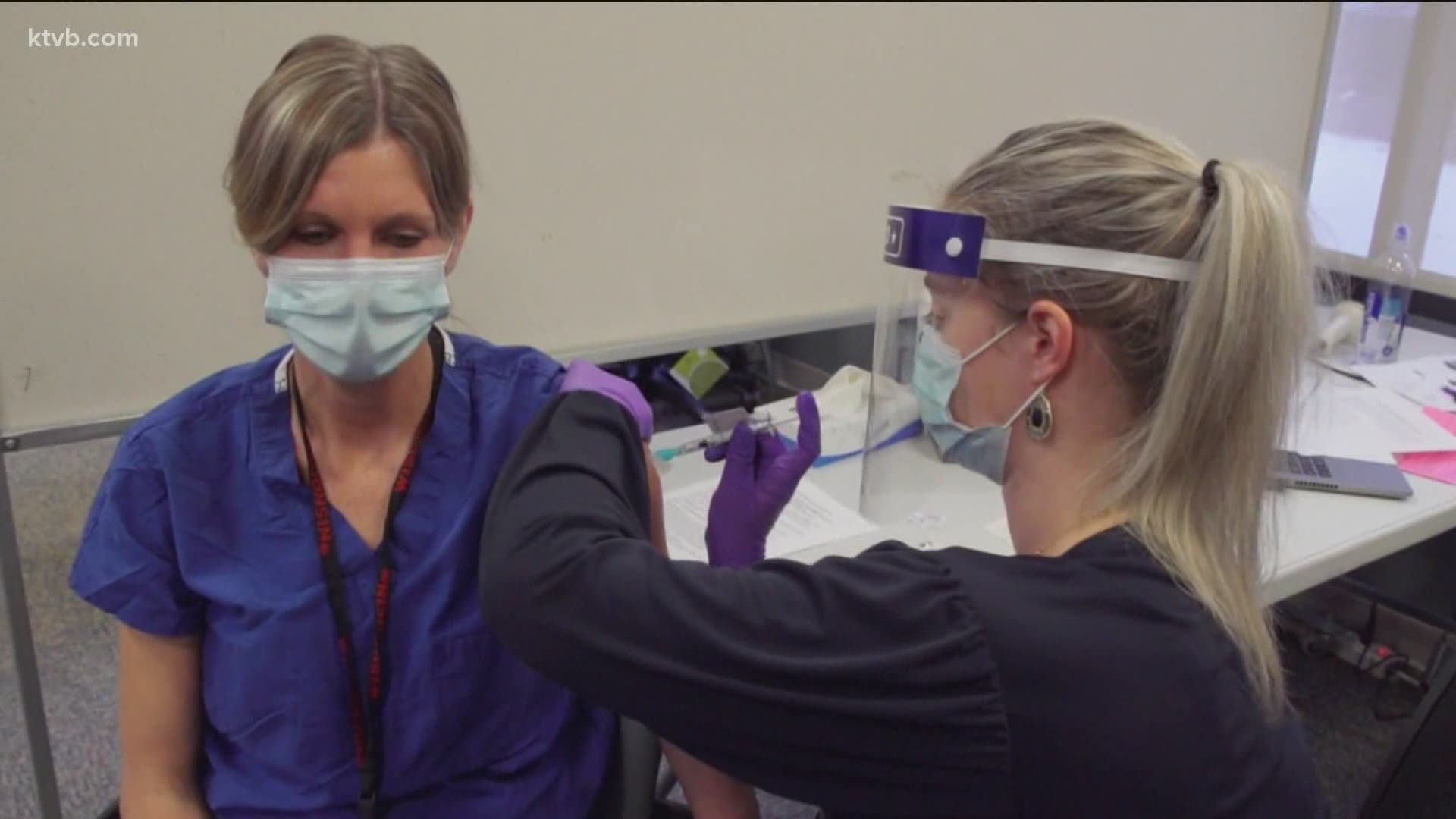 The Gem State reported 696 confirmed and 29 probable cases on Saturday, raising the state's total number of cases to 129,069 and 107865 confirmed cases of COVID-19 since the pandemic began in March.

Idaho did not add any new deaths, the state's coronavirus-related death toll stands at 1,282

The number of vaccines administered grew to 2,306.

The Gem State reported 1,081 new confirmed and 271 new probable cases on Friday, which puts the state's total number of confirmed cases to 107,169 and 128,218 probable and confirmed cases since the pandemic hit Idaho in March.

Idaho's death toll from the pandemic grew to 1,282 after 14 new deaths were reported on Friday.

The Gem State added 1,419 new cases to the running total on Thursday. 1,138 of those cases are confirmed and 281 are probable.

20 new deaths were recorded on Thursday, bringing the statewide death toll to 1,268. Here's how the deaths break down county-by-county:

To date, 321 doses of the COVID-19 vaccine have been administered to Idaho healthcare workers.

An estimated 49,318 recoveries have been made.

If you happen to need a mask and live in Eagle -- here's your chance to get a free one.

The City of Eagle is giving away free boxes of disposable face masks Thursday and Friday.

The masks will be distributed at Guerber Park from noon to 3 p.m.

Be sure to bring your proof of residency for Eagle.

State health officials on Wednesday reported 29 coronavirus-related deaths statewide, bringing the death toll since the beginning of the pandemic to 1,248.

Of the new deaths, eight were in Canyon County and seven were in Ada County. Here's how they break down by county:

Ada, Canyon and Kootenai counties continue to be the state's top hot spots. Of the new cases, Ada had 325, Canyon had 148 and Kootenai had 145.

Since the pandemic began in March, 104,950 Idahoans have tested positive for the virus.

The state has also released the latest hospitalization data. As of Monday, 470 people were hospitalized with COVID-19 statewide, 109 of them in the ICU.

The Idaho Department of Health and Welfare and local health districts on Tuesday reported 1,304 new confirmed and 402 new probable cases - for a total of 1,706 new COVID-19 cases.

Of the new cases, Ada County had the most by far with 483. Kootenai County in North Idaho had 236 while Canyon County had 176.

Also on Tuesday, 17 deaths were reported statewide, bringing the death toll since the beginning of the pandemic to 1,219.

Here's how the deaths reported on Tuesday break down by county:

The state has begun tracking the number of COVID-19 vaccine doses administered throughout Idaho. As of Tuesday, the state said 38 doses had been administered, although the number didn't change from Monday when the vaccine arrived at several hospitals and a health district.

1,272 new cases of COVID-19 were reported on Monday. 1,097 of those cases are confirmed and 175 are probable. Ada County added the most new cases with 366. Kootenai County followed with 182 cases and Canyon County with 163 cases.

22 new deaths were added to the state's total. Here's how the deaths break down by county:

The latest hospitalization data from Dec. 11 shows a continuing downward trend since hospitalizations peaked on Dec. 1 (496). As of Dec. 11, 444 Idahoans are in the hospital with COVID-19, with 101 in the ICU.

An estimated 47,497 recoveries have been made.

Note: Health districts do not update their numbers on weekends. All data is pulled from the Idaho Dept. of Health and Welfare's website.

The Gem State added 547 new cases to its total number of COVID-19 cases on Sunday. 511 of the new cases are confirmed while the remaining 36 are probable.

There have been 1,180 COVID-19 related deaths in Idaho since March.

An estimated 46,980 recoveries have been made.

Idaho reported 722 confirmed and 138 probable cases of the coronavirus on Saturday, pushing the state's total number of cases to 120,632 since the pandemic began in March. Idaho has also reported 101,042 confirmed cases of COVID-19.

Four new deaths were reported on Saturday as well. Two were in Ada County and Bannock and Owhyee counties both added one.

The Gem State, based on data published by the Idaho Department of Health and Welfare and the state's public health districts, added 1,161 confirmed and 385 probable cases on Friday. That pushes Idaho over 100,000 confirmed cases of COVID-19 since the pandemic hit Idaho in March with 100,260. Idaho has reported 119,610 total cases of the coronavirus.

Ada County reported the most cases with 407, followed by Kootenai County's 144 cases and Canyon County's 141.

The deaths happened in the following counties: (How many deaths reported in that county)

The governor authorized an increase from 100 to 250 personnel serving on active duty.

This comes nearly a month after his executive order that mobilized 100 personnel for 30 days, coinciding with the public health order rolling Idaho back to a modified Stage 2 of the Idaho Rebounds plan.

The new authorization also allows guard personnel to continue performing their mission through March of 2021.

Daily incidence rates of COVID-19 remain at an elevated level across the district. This is based on data available for the date-range Nov. 22 – Dec. 5, 2020. Adams County has moved to the red health alert level this week. Currently, all six-counties within the jurisdiction of Public Health District 3 are at the red health alert level. As of Dec. 5, the daily district-wide incident rate per 10,000 is 9.22.

All six counties in the district are now experiencing community spread, which puts people living in and visiting these communities at higher risk for exposure.

Adams County saw a 94% increase in daily COVID-19 incidence, which brings the most recent incidence rate to 5.55 daily new cases per 10,000 people. Many of these new cases can be traced to travel and community events. Additionally, the test positivity rate for Adams County is 15.22% which has nearly tripled from last week. While there have been some COVID-19 cases in Adams County schools, there is no evidence of cluster outbreaks or transmission within the schools.

The Idaho Department of Health and Welfare and local health districts on Thursday reported 1,423 new confirmed and 390 new probable cases - 1,813 cases in total.

With 99,099 confirmed cases since the beginning of the pandemic, Idaho will most likely cross the 100,000 mark on Friday.

"You may see these numbers and assume the individuals were already gravely ill, but some of our highest-risk factors for severe COVID-19 symptoms are conditions that otherwise would not be considered a death sentence," said Tanis Maxwell, epidemiology program manager. "When you consider that common conditions like obesity, diabetes, hypertension, asthma, etc. are all risk factors, you begin to realize how many Idahoans really are in danger of severe side effects from this disease."

Of the 176 total deaths related to COVID-19 in south central Idaho by end of November, 84 were residents of long-term care facilities.

"These are our most vulnerable population in the state. Not only are they typically in their later years, but they are living in close quarters with each other and have frequent interactions with staff who come in and out of the facility every day," said Brenda Gully, COVID-19 Rapid Response Leader.

Currently 39 of 56 long-term care facilities in the region have an active outbreak. Several of these are uncontrolled, meaning they have more than 5 cases among their staff and residents.

The Gem State, based on data published by the Idaho Department of Health and Welfare and the state's public health districts, added 1,838 new confirmed and 391 new probable cases on Wednesday, setting a new single-day record of total cases and confirmed cases reported.

Idaho also added 37 new COVID-19-related deaths on Wednesday. However, Southwest District Health reported 12 new deaths in Canyon County that happened in October and November but did not specify the exact dates of the deaths.

Clearwater County reported its first death, leaving just three of Idaho's 44 counties without a single coronavirus-related death reported since the pandemic began spreading across the Gem State in March.