“We are mimicking what the community is seeing,” said West Ada School District spokesperson Char Jackson. 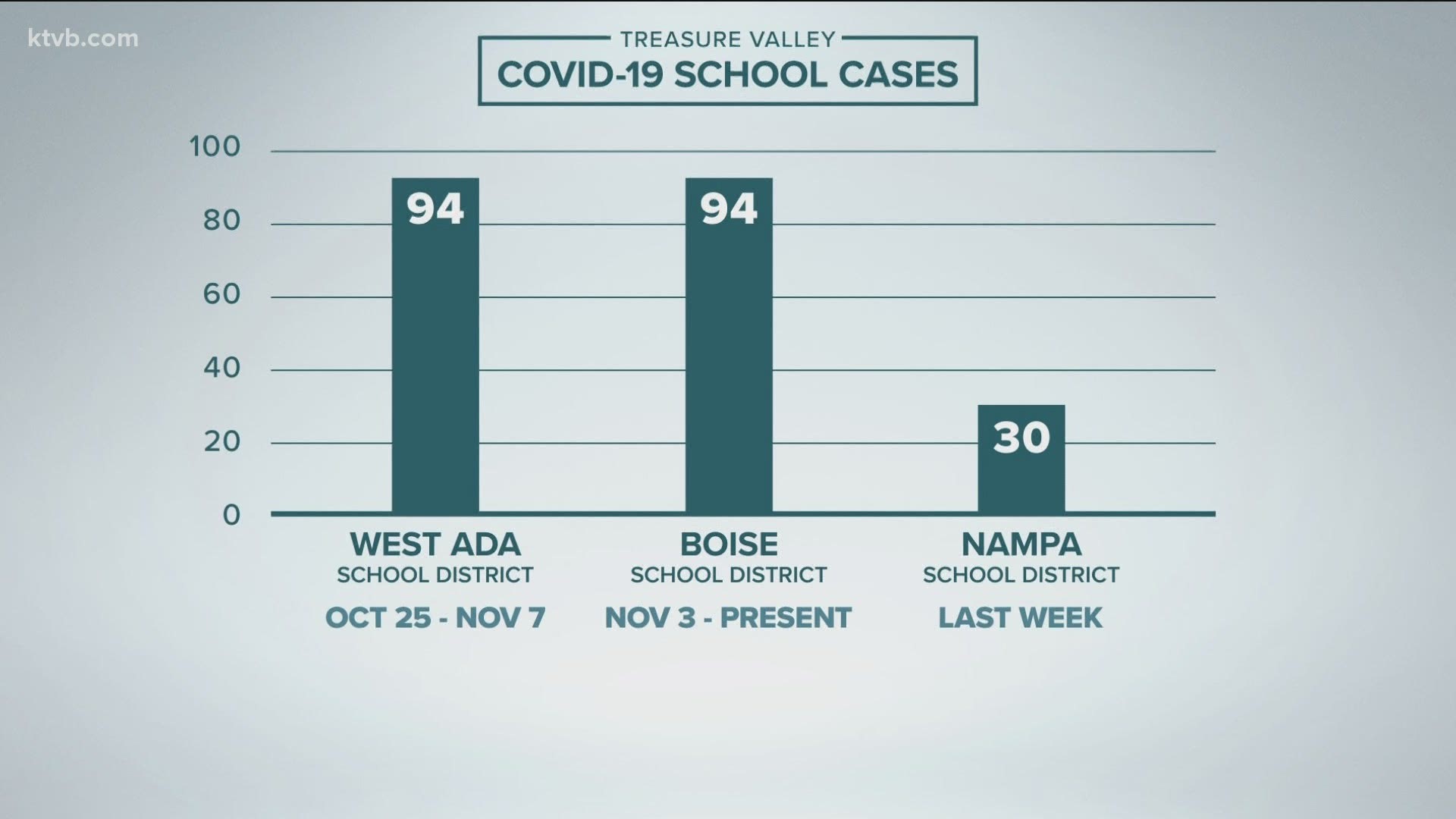 BOISE, Idaho — From Boise to West Ada and Nampa, school districts across the Treasure Valley are seeing a rise in COVID-19 cases.

“We are mimicking what the community is seeing,” said West Ada School District spokesperson Char Jackson. “We're seeing a rise of cases in our community and our numbers are simply reflecting that.”

Through contact tracing, West Ada has learned many of these cases are appearing at the high school level, and the majority of cases are not stemming from being in school, but what students do after school or on the weekends.

“Through our contract tracing, we discovered that one parent had a sleepover with about 20 girls, and that impacted 12 different schools in our district," Jackson said. "So the actions of one has a huge education impact on many."

Situations such as this are also being reported in the Nampa School District, according to district spokesperson Kathleen Tuck.

“We're not seeing cases that are being transmitted necessarily in the schools, but because they're out in the community and the cases are rising in the community, we are seeing the effects of that in our schools,” Tuck said.

From Oct. 25-Nov. 7, West Ada School District, which is the largest school district in Idaho with nearly 38,000 students, reported 94 cases in students and staff combined.

From Nov. 3-10, Boise School District has also reported 94 cases. Of that number, 79 are confirmed and 19 are considered probable.

It is important to note that all districts track their cases differently.

“Of course, seeing a rise is concerning, but we believe that we are practicing our safety protocols and we are following all of that and trying to be as safe as possible,” Jackson said.

In addition to a rise in cases, Nampa SD is also seeing the number of students and faculty in quarantine dramatically increase.

“That’s where a lot of our challenges come from because we do lose a lot of our teachers and staff to quarantine and then that puts a real crunch on our schools," Tuck said. "It makes it so we put a lot of stress on our subs and we don’t have enough substitutes as most people know. This is a statewide issue."

“I can tell you that we have a lot of quarantines at Mountain View High and Meridian High," Jackson said. "We're really kind of focusing in there and trying to figure out what's going on there so we can do better to get these quarantines down."

Both school districts said it's important for everyone to do their part.

“We really want to educate kids and having kids in the schools is good for kids but we're not going to be able to sustain that unless we can get the rise down in the community," Tuck said. "It's really up to everybody to do what they can to try and keep those cases down."