From a skiing crash to prison: A timeline of addiction

A broken collarbone and a prescription for painkillers plunged Tim Ganley and his family into the world of opioid addiction. 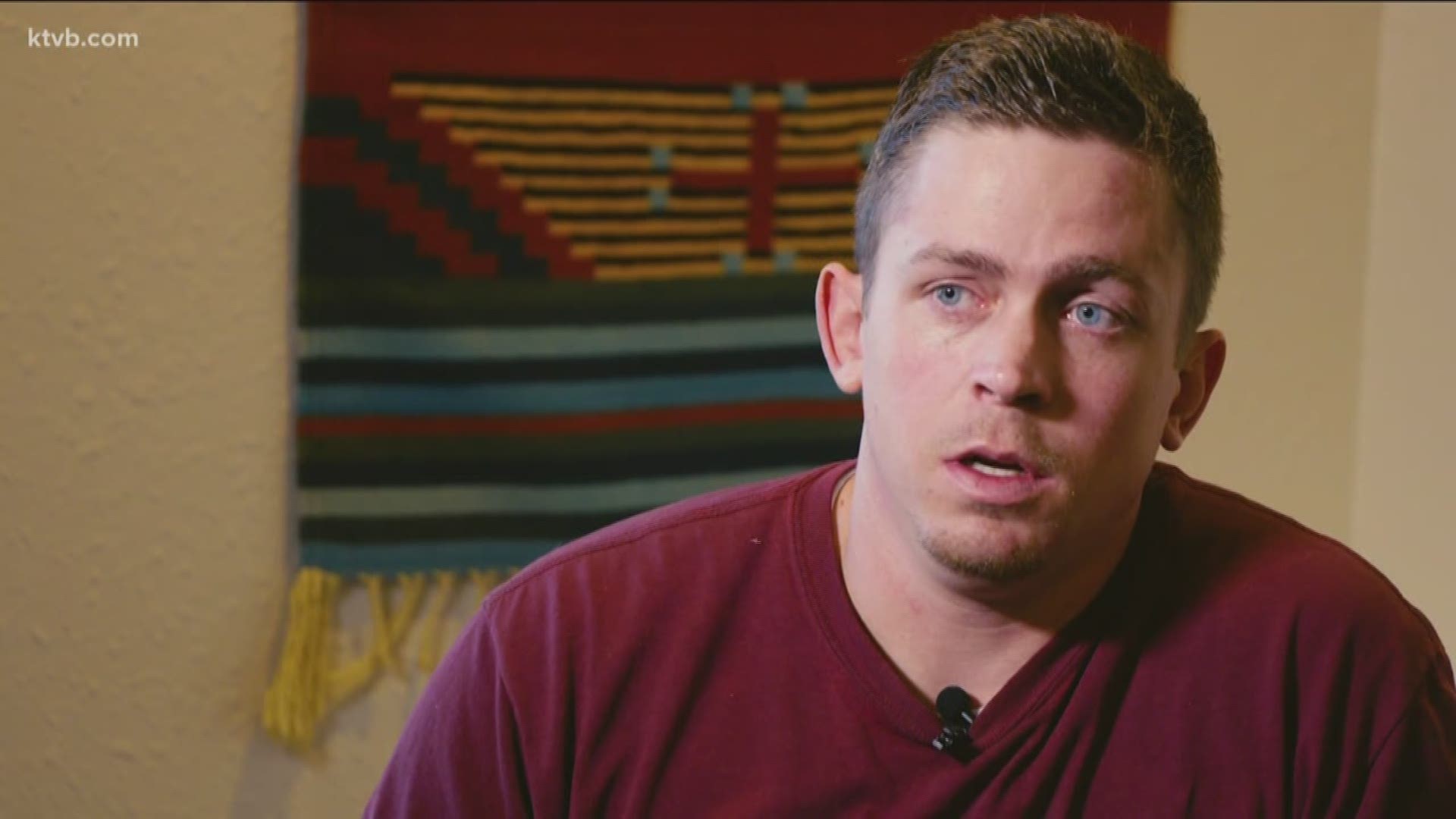 Growing up in Idaho, Tim Ganley always loved being outdoors.

From tearing up the slopes at Bogus Basin in the wintertime, to summers spent wakeboarding out on Lucky Peak, action sports were a constant throughout his childhood and teenage years.

Ganley always knew his favorite activities carried the risk of crashes and spills, but never took the threat of injury too seriously.

Things started to change for Ganley after a nasty ski crash during his freshman year of college. His collarbone snapped clean through - the "worst pain" he had ever felt in his life, he said. In the hospital after his accident, a doctor prescribed him a standard opioid painkiller to help him deal with the pain.

That was the beginning of it all.

"That is where I started, had my first experience with prescription medications," Ganley said.

A SLOW SLIDE INTO ADDICTION

Shaking off the injury and jumping right back into the things he loved wasn't as simple as Ganley had imagined. His collarbone did not quite heal, then broke again. The pain continued to dog him.

Ganley was prescribed more opiates, he said, but soon enough, that prescription ran out. He asked for more, but his doctor said no.

That didn't stop him from getting pills.

"I just kept finding it on my own because it was helping me, and I liked the way it made me feel, really," he said.

At first, it was just a few pills to stave off the pain as he balanced classes at Boise State, work and his social life. But soon, he was buying more and more to make it through the day. The prescription painkillers began to eclipse everything else in his life.

"Over time they just took over, and they were all I thought about," he said. "I was obsessed. It was all I could do, all I could think about."

"I was doing anything and everything to support my habit, and on December 4th of 2012 I was arrested for the first time and charged with my first felony," he said.

AN 'EVERY DAY' EPIDEMIC

Dr. Lee Binion, an emergency physician at Saint Alphonsus in Boise, says opioid addiction is a mounting problem in Idaho. In the first six months of 2018 alone, she saw 130 deaths related to opioid overdoses.

"It is a big issue here. We have several deaths that are related directly to opioid overdoses, opioid misuse," she said. "Our numbers track very closely and even a little bit higher than the rest of the country."

For the last several years, Binnion has been leading the way in Idaho to fight the opioid epidemic with a new approach.

That starts with undoing decades of bad prescription writing, she said.

Binnion is part of a campaign moving towards prescribing methods of non-opioid pain relief - even if that means a patient's pain is not completely eliminated.

"We believe that they're in pain, and we understand that that can limit their function in life, but opioids are not necessarily the answer," Binnion said.

Binnion believes that changing the conversation around opioid addiction could be the first step in solving the crisis.

From his seat in the warden's office at the Nampa Community Reentry Center, Ganley said by the time he realized he had a problem "it was far too late."

He made headlines in Boise for stealing more than $1,000 worth of books from the Boise State bookstore and returning them for cash in 2012 - a felony offense.

Ganley got clean after his arrest, but it didn't last long. He relapsed, and this time, set his sights on a cheaper high.

"When I went back into it, I went right into heroin," he said. "It is much more inexpensive, much more potent."

Over the next few years, Ganley committed more crimes to fuel his addiction, racking up felony charges for grand theft, burglary, and forgery. He was sentenced to five years of probation, but violated the terms of his release, and fled to Utah to avoid arrest.

"There was nothing that was going to stop me from using, that's all I cared about at that point," he said.

Ganley's drug use and lawbreaking didn't stop when he left the state. He was ultimately arrested on new felony charges in Utah, and spent a year behind bars before being extradited back to Idaho in 2018 to face justice.

This time, probation was not on the table. Ganley was sentenced to eight years in prison, with at least three years before he would become eligible for parole.

A FAMILY SWEPT UP

Binnion said it is cases like Ganley's she is hoping to change through her work.

Binnion's career has long provided her a window into the misery and havoc of addiction, she said. But this one is even more heartbreakingly personal: Ganley is her son.

"Having him in prison is just devastating," she said. "I thought my kids would never be able to pull anything off on me, because I knew the ropes. And they pulled it off on me."

Ganley, now 28, acknowledged that his mother recognized the warning signs before he did.

"She saw it coming, because she is a professional, she has seen it before," he said "She said 'Tim, you need to get help. Get help.' I said, 'I'm good, I don't have a problem.'"

His freshman year at Boise State, Ganley recalled, he even wrote a paper on prescription painkiller abuse, doing extensive research into addiction's symptoms and effects. Despite that, he said, he did not recognize how addiction was gripping him.

Likewise, Binnion's work with addiction could not prepare her for the pain of experiencing it first-hand.

The weight of his past misdeeds is not lost on Ganley.

Binnion now shares her son's story while presenting to the community about strategies to beat the opioid crisis. Both she and Ganley hope his experience can serve as a teaching moment for others dealing with opioid addiction.

"Trying not to enable, yet be supportive is a very fine line," Binnion said. "It takes a lot of failures before you get it right -  and maybe even then, you don't get it right."

But Ganley took a different view: A family's support, even when an addict is at their lowest, can make all the difference.

"If I could say anything to anyone right now, it would probably be [to] the families," he said. "The support and love that they give goes a lot farther than they may think."