More than 400 firefighters took part in the nine-hour battle to save the 12th-century Notre Dame on Monday evening. 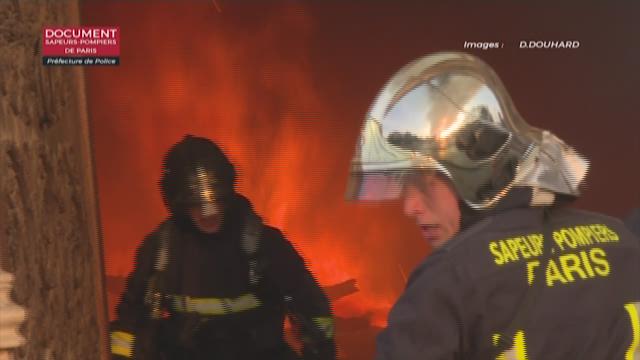 France is paying a daylong tribute Thursday to the Paris firefighters who saved the internationally revered Notre Dame Cathedral from collapse and rescued its treasures from encroaching flames.

French President Emmanuel Macron will host the firefighters for a special gathering to share "words of thanks," according to his office. Top government ministers will also take part in the event at the presidential palace in Paris.

Later, Paris City Hall will hold a ceremony in the firefighters' honor, with a Bach violin concert, two giant banners strung from the monumental city headquarters and readings from Victor Hugo's "The Hunchback of Notre Dame."

More than 400 firefighters took part in the nine-hour battle to save the 12th-century Notre Dame on Monday evening. Its spire collapsed and roof was destroyed, but its iconic towers, rose windows, famed organ and precious artworks were saved.

Remarkably, no one was killed in the fire, which occurred during a Mass, after firefighters and church officials speedily evacuated those inside.

Among the firefighters being honored Thursday is Paris fire brigade chaplain Jean-Marc Fournier, who helped salvage the crown of thorns believed to have been worn by Jesus at his crucifixion.

Another is Myriam Chudzinski, among the first firefighters to reach the roof as the blaze raged. Loaded with gear, they climbed hundreds of steps up the narrow spiral staircase to the top of one of the two towers. She had trained at the cathedral for just this moment.

"We knew that the roof was burning, but we didn't really know the intensity," she told reporters. "It was from upstairs that you understood that it was really dramatic. It was very hot and we had to retreat, retreat. It was spreading quickly."

She heard a roar, but her focus was on saving the tower. She learned later that it was the sound of the spire collapsing.

Investigators so far believe the fire was accidental, and are questioning both cathedral staff and workers who were carrying out renovations to the cathedral before the fire broke out.

Some 40 people have been questioned and some are being questioned again Thursday, according the Paris prosecutor's office.

Fire officials warn that the massive cathedral still remains fragile, and are removing some statues above the rose windows to keep them from falling.

The building would have burned to the ground in a "chain-reaction collapse" had firefighters not moved as rapidly as they did to battle the blaze racing through the building, said José Vaz de Matos, a fire expert with France's Culture Ministry.

An initial fire alert was sounded at 6:20 p.m., as a Mass was underway in the cathedral, but no fire was found. A second alarm went off at 6:43 p.m., and the blaze was discovered on the roof.

Macron wants to rebuild the cathedral within five years — in time for the 2024 Summer Olympics that Paris is hosting — but experts have questioned whether that's realistic, given the vast scale of the work to be done. One said the Notre Dame rebuilding project would easily take 15 years. Nearly $1 billion has been pledged for the cathedral's restoration.

The bells of cathedrals across France rang in a moving tribute Wednesday to Notre Dame and the firefighters.