"I think everybody is just so frustrated," parent Angela Weber said about transparency in the district. "It’s just like a boiling pot and the lid came off and people have just had it." 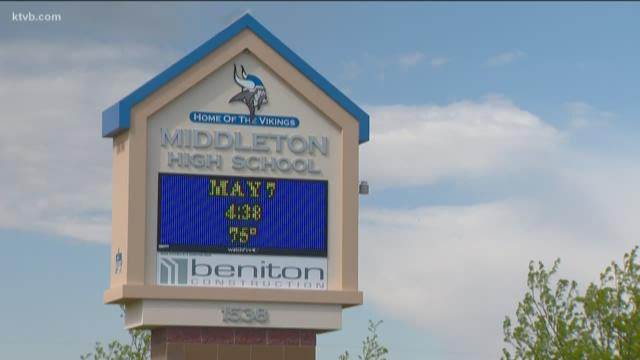 MIDDLETON, Idaho — A police investigation is underway for a possible assault on a Middleton school board member after the board's meeting Monday night.

Tempers ran high and community members sitting in on the meeting got vocal.

After the meeting adjourned, board members said things got a little physical.

“As the meeting ended, there was yelling, screaming, name-calling," said Kirk Adams, one of the board members. "Another board member and myself stood up and waited. I told her to follow me. At that point, the officer came up and started to lead her out. It became very personal – I witnessed physical contact.”

According to Adams, the purported assault by someone attending the meeting was directed at board member Aleisha McConkie.

“I ended up being escorted by a police officer as people yelled at me and threatened my kids, my life, etc.,” she said in a statement to KTVB. "I was shaking so bad I could barley get my keys in the ignition."

Idaho State Police confirmed to KTVB that there is an active assault investigation underway as a result of the meeting, but did not provide any other details.

Idaho State Police said because the school resource officer was involved to an extent, Middleton police felt there could be a conflict of interest in the investigation so ISP was asked to take it over.

McConkie went on to describe the meeting's hostility and the community's reaction toward board members.

Watch video of the heated Middleton school board meeting below:

"It was very hostile," she said. "People were yelling at us and telling us how horrible we were, that we were cowards. I have never been so scared. I didn't know people could be so mean."

Adams, who has only been on the school board for four weeks, also described it as a hostile environment.

“I can honestly say [Monday] night was the first night in my life I’ve gone to bed in Middleton, in anywhere, I felt uncomfortable, I felt for my wife’s security,” he said.

During the meeting, the board made a motion to accept the superintendent's personnel recommendations, which included not renewing the contract for high school principal Benjamin Merrill.

At that point, board member Marianne Blackwell asked for discussion, which the board allowed.

She then went on to read a written statement: "The scope of the investigation is not what we promised the public it would be. We never let Mr. Merrill see the investigation and now it’s being used to cost him his job. We have never given him an opportunity to defend himself, we denied him three different times.”

At that point in her statement, Blackwell was cut off and McConkie called for point of order, which the board supported.

The crowd reacted, with some yelling, “Let her speak! We want to hear her talk. This is about our kids.”

Adams said the reason Blackwell was cut off is because she was reading a personal opinion, not official board business - while the board was in executive session.

"It wasn’t a discussion – it was a statement and we asked that the statement not be made there as it wasn’t a board authorized statement,” Adams said.

Parent Angela Weber was at the meeting and said she's frustrated by the whole process.

Weber acknowledged that the crowd "went overboard," but she says it's because people in the community are so passionate and confused about what's happening in the school district.

"I think everybody is just so frustrated it’s just like a boiling pot and the lid came off and people have just had it," Weber said.

Those frustrations have prompted a recall effort to remove three board members: Adams, McConkie and board chair Tim Winkle. Dave Morgan, an attorney for the recall effort, said the Canyon County Elections Office on Wednesday certified the first phase of the effort. The group now has 75 days to get at least 700 signatures, which would put the recall on the August 2019 ballot.

According to Morgan, the recall effort is centered on bringing Merrill back as principal of Middleton High School.

Adams said he hopes the community can move past all this and do what is best for the kids.

“[We need to] come together, find common ground and really build on what we’re going to do for 2019-2020," he said. "If you look at the overall workings of our schools, which I did my first week here [on the board], it’s shocking how well things are working – from an academic standpoint, from an athletic standpoint. Things on the inside are working much better than things on the outside right now - and I believe this will pass.”