Hundreds attended the ceremony in the Morrison Center Thursday afternoon. 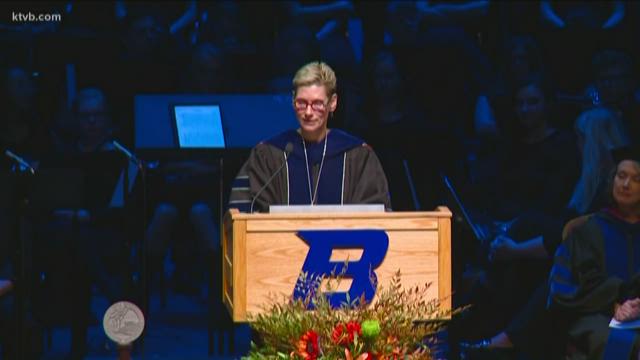 Hundreds attended the ceremony in the Morrison Center, where faculty, staff, and administration were decked out in academic caps and robes.

Dr. Tromp says she's come a long way since her childhood, hailing from a small town in Wyoming with a low graduation rate.

She says she's happy and proud to be at Boise State University.

"I want to find people in our cities and small towns and rural areas I know the kind of town that's out there I want us to locate those people and help them achieve their dreams," said Trump. "One of the most extraordinary things about universities is that they are these incredible and transformative places that change people's lives so they can change the world. I feel honored to have the privilege of leading Boise State University in that effort, to better serve the people of our state and to better serve Idaho."

The ceremony ended with the investiture of Dr. Tromp, which included the presentation of  a symbolic medal, entrusting her as the president of the university.

After the ceremony, Dr. Tromp attended the grand opening for the new Center for Visual Arts on the Boise State campus.