KTVB reached out to several districts in and around the Treasure Valley to find out what plans are in place for the 2020-2021 school year. 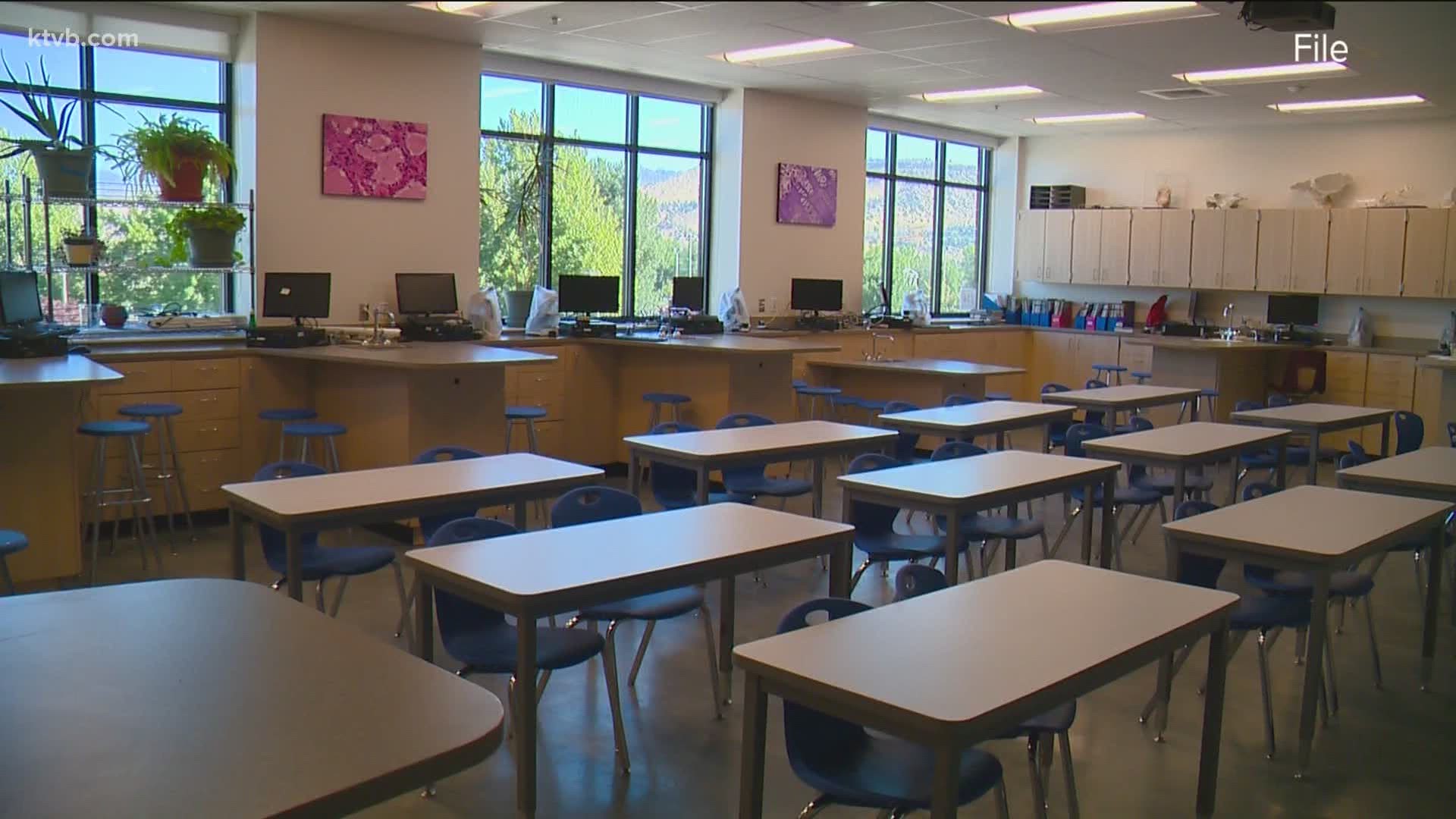 BOISE, Idaho — Many Idaho school districts are just weeks away from the start of the 2020-2021 school year.

Parents, teachers and students are wondering what this year will look like as the coronavirus pandemic continues nationwide. Will learning be done in-person, all online or a little bit of both?

Dr. David Peterman, the CEO of Primary Health Medical Group, told Central District Health board members on Tuesday that he believes schools should not reopen yet.

“I feel so strongly that schools should not open until we get the positivity rate down to 5% or close to that," he said. As of Wednesday, the rate at which Idahoans were testing positive for the virus was at 13%, according to data provided by the Idaho Department of Health and Welfare.

According to Peterman, if schools open amid a continuing rise in coronavirus cases, it will be hard to manage further spread.

KTVB reached out to several school districts within CDH's boundaries to see what current plans are and if Peterman's suggestion will affect them.

Green would mean students are back in the classroom but with some safety precautions in place. Red would mean learning is done completely remotely.

In between those two options is the yellow plan, which would include stricter safety measures and a possible balance between in-person and remote education.

“Requirements for social distancing are more stringent [under this plan], so we would go to an alternating schedule so we can actually keep kids physically six feet apart in a classroom," said Eric Exline, the district's communications director.

Under the yellow plan, the goal would be to keep younger kids in the classroom as much as possible, if safety measures allow for it.

“We would try and just do alternating days at middle and high school levels and have kids in elementary come every day," Exline said. "Just take some steps to keep the kids much more separated, which is easier to do in an elementary school because they don’t switch classes or move up and down the hallway in large groups."

West Ada has not yet made a final decision for the school year. Exline said the district hopes to have a plan in place at least a few weeks in advance so parents can make any adjustments needed.

“If it’s red, that’s a whole bunch of planning for families in terms of, ‘how do I take care of my little ones?'" Exline said. "'What’s my family’s plan going to be if school’s not in person?’”

“[We're] starting out at yellow or ‘proceed carefully at school’ and putting in various precautions around social distancing, hand washing, cleaning, reducing where we can group sizes," said Allison Westfall, communications director with Kuna School District. "We’re encouraging parents, if they can, to have their children walk or bike to school or drop them off to reduce the sizes of busloads as well.”

A hybrid schedule might also be possible in the yellow stage, if necessary. That would need to be further developed, but Westfall said that likely means students would alternate between in-person and remote lessons.

The Boise School District plans to open Aug. 17 and is allowing parents the option of in-person or remote learning.

The Basin School District in Idaho City also has plans in place for a hybrid model. Ken Gordon, chairman of the school board, told KTVB that would mean having students in the classroom Monday through Thursday, then doing remote projects from home on Fridays. Safe hygiene practices, social distancing and masks would be required in school.

On July 16, the superintendent of the Garden Valley School District posted on its website that it plans to return to normal.

KTVB reached out to the superintendent to see if plans have changed since then but did not hear back.

Jim Foudy, superintendent for the McCall-Donnelly School District, told KTVB on Wednesday a plan is still being worked on. The goal is to have one in place by Aug. 10.

The Mountain Home School District told KTVB the school board is meeting to discuss different options. It hopes to have a final decision by Aug. 1.

Though each looks a little different, one thing all districts agree on is that no plan is set in stone.

“We might start in green and end up in red a month later because something has changed with the pandemic," Exline said. "Or we might start red and be able to go to green later.”

The situation changes frequently and Westfall said which phase the districts are in depends upon the community.

“That yellow, that red, that green – schools can’t control that," she said. "It’s our community health. So it relies on individuals taking action to prevent the spread of the virus.”

KTVB also reached out to the Horseshoe Bend School District about its plans but did not receive a response.

RELATED: Viewpoint Special: What will Idaho schools look like this fall?

RELATED: Saint Alphonsus doctor explains the risks for schools opening, effectiveness of face masks and what herd immunity is