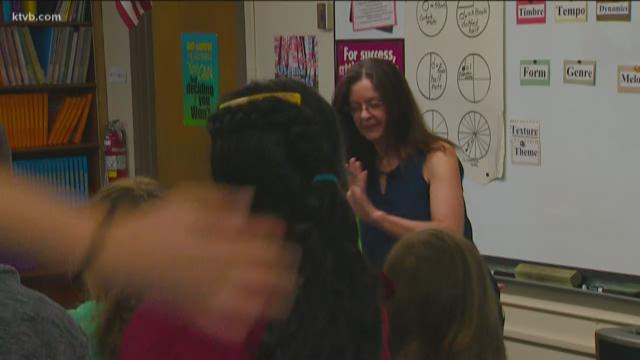 She loves her students, too. Finch is a music specialist at Garfield Elementary School in Boise.

For this year's end of the school year production, she passed her love of The Beatles on to her students.

The whole program was one Beatles' hit after another. She says the students loved it.

"I thought it was cool because in the songs it showed a lot of expression and just how they felt," fifth-grader Kaeliana Hernandez said of The Beatles songs.

Hernandez and her friends in the chorus agree that Mrs. Finch encourages them to try things and perform well.

A fellow teacher says Mrs. Finch finds the students' strengths and magnifies them.

"I kind of wander around as they sing sometimes, and I'll tell them, 'you have a beautiful' voice, you should be singing.' and they think, I do?" Finch said.

One of those students is fifth grader Gareth Brown.

"I've just never wanted to do any solos or any speaking parts because of the fear of being nervous," Brown said.

Gareth has a visual impairment. It hasn't held him back, so neither would his nerves.

"When he raised his hand I thought, finally he's going to do it," Finch said of Brown expressing an interest in singing a solo.

"So then I thought I should probably do this next year," Brown said. "I can do it."

"He did awesome!" Finch said.

The other 150 students really shone as well.

They sang their hearts out to The Beatles classics, including "I Want To Hold Your Hand," "She Loves Your," "Yellow Submarine," "Twist and Shout," "All You Need Is Love" and "Blackbird."

"Having their parents come to see them perform makes them proud of themselves. It brings families together." Finch said.

"It prepares us for more challenging things," Hernandez said.

Mrs. Finch put on the whole concert on a $50 budget. She says other teachers really pitched in with supplies and decorations to make it all happen.

She says the biggest thing she wants the kids to get out of this concert experience is joy.

"Music is a language of its own and gives them a chance to feel good about themselves, be involved," Finch said.

This is the final Innovative Educator of this school year. We will shine the spotlight on more teachers next school year.