"Anything that gets kids more excited about school, they're just going to do better." 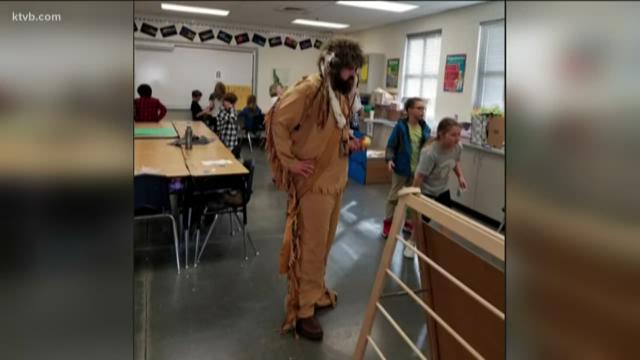 "It's a fun age to watch them grow and mature and watch them become better at reading and researching, learning from each other," Borjian said.
Most days he dresses like most teachers, wearing dress pants and a nice shirt.

But for one particular history lesson, he becomes "Trapper Dan" the mountain man. He dresses from head to toe in mountain man garb and even plays the role.

"I thought it was real and then I knew it was him after that," fourth-grader Mallory McCarthy said.

"Initially it's a shock. Then it's excitement," Borjian said of his portrayal. "And they do a really good job of holding it together and really listening."

"Instead of him just teaching it, he had a voice," McCarthy said of how Mr. Borjian speaks like a mountain man.

"And so everyone was laughing and he was just telling all these cool facts," fourth-grader Nash Weight said.

Borjian has been doing this for several years, teaching about fur trapping, the dangers of the job and what mountain men did on their downtime.

"I was watching TV and the movie preview came on for "The Revenant," which is about a mountain man," Borjian said. "So I read that book, and thought this is really cool. So I started reading more and more mountain man books and it just dawned on me that I could dress up like a mountain man and I could just come in and teach all this cool stuff that's not in our history book."

The students even get to try out mountain man skills.

"The kids actually come up with rendezvous games that they all play and they also bring in things that they can trade and barter with each other," Borjian said.

"He brought detailed stuff that they actually had, but they were fake. So it helped me learn a little more," McCarthy said.

"Anything that gets kids more excited about school, they're just going to do better," Borjian said.

Another fun thing Borjian does is take his students panning for gold in a nearby creek. It's actually a history and STEM lesson. STEM stands for science, technology, engineering and math.

"At this point, after six years of doing it the kids use the design and engineering process to try to create their own gold catching device," Borjian said.

So, have they ever struck it rich?

"I can't tell you that because then you might come and try to take our gold," Borjian said with a big laugh.

You can see why he was selected as this week's Innovative Educator.

"It's so much fun to see them learn and see when the light bulbs go off and they start making connections with things," Borjian said.

Nominate an Innovative Educator
If you'd like to nominate a teacher, you can email us at innovativeeducator@KTVB.com. Just tell us a little about what makes them innovative.