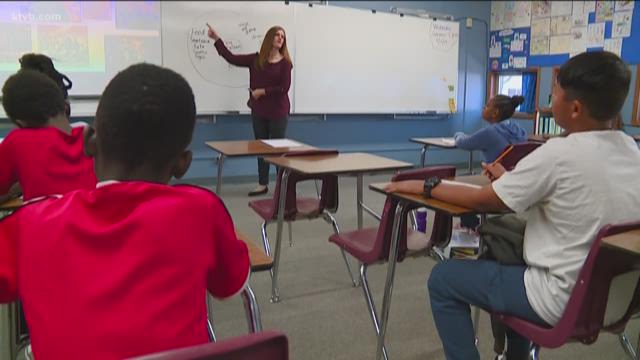 BOISE, Idaho — Dr. Lisa Sterling teaches English language development to refugee students at Hillside Junior High School in Boise. It's part of the Bridge program which helps students from other countries adjust to their new academic and social surroundings.

"I love it so much," Sterling said.

Sterling had been a school psychologist for 14 years.

"Anything I could do with that population I just couldn't get enough of it," Sterling said.

So she made the switch to teacher; changing her career path to a passion she had to pursue.

She is now in her third year.

"Some of it is just to teach them how to be a student and how to feel safe," Sterling said. "But then to incorporate and build their vocabulary."

But the 14 year old from Congo wasn't so sure he liked Boise when he first moved here last year from a refugee camp in Uganda because of the snow.

"I was like I want to go back home, but then I came to school and I gained new friends, good friends," Rwankuba said.

He feels safe, is thriving and taking what he's learning home.

"For us, if you learn something that's new in your family, you go and teach your brother or your father," Rwankuba said.

Grace Ntawiha, 13, from Uganda is thriving, too.

"For me, like one year here, I know how to speak English," Ntawiha said excitedly. "It's like impossible."

On the day KTVB visited Sterling's class at Hillside Junior High she was focusing on the importance of culture. Sterling encourages the kids to hold onto their own culture while embracing new ones.

"I'm trying to teach them that culture is a group," Sterling said. "It could be our Hillside culture. It could be your family culture."

Sterling will get to learn about education in a different culture herself. She was selected to participate in the National Education Association Foundation's Global Learning Fellow Program. In October, she will go to Washington, D.C. for a two-day workshop with 43 other educators from around the country. That will be followed up with a series of webinars. Then next summer they will all go to South America to work with teachers and students at a school in Peru.

"The idea is to kind of create what we call a global kind of classroom," Sterling said. "So bringing in culture and social justice and human rights and diversity and putting that kind of spin every day in the classroom."

With students from several African countries as well as Mexico, Venezuela and Vietnam, Sterling's current class is global in its own way, but also a comfortable, little culture that is allowing these impressive kids to see the world that's opening up to them.

"If I learn more English, I can be an interpreter," Davido Rwankuba said.

"I want to be a doctor," Grace Ntawiha said.