In a letter sent to the State Board of Education, the Shoshone-Bannock tribes said using Native American mascots is racial misappropriation.

BOISE, Idaho — The Shoshone-Bannock tribes are asking the state of Idaho to ban public schools from using Native American mascots.

In a position paper submitted to the Idaho State Board of Education, the tribes argue that using mascots with names like "Redskins," "Indians," and "Braves" amounts to racial misappropriation.

The tribes also asked Gov. Brad Little and the state legislature to take a stand and ban names referring to Native Americans.

In response, the governor said this isn’t a state issue.

"I've been over and talked to the whole tribal council, we talked about it,” Little told KTVB on Wednesday. “That's really a local school district issue, you can see they went up on the Teton Basin and resolved that."

The governor referenced the fact that the Teton School District voted 4-1 in favor of renaming the Teton Redskins earlier this month.

The tribes said the mascots do not honor Native Americans and thinking so is grossly inaccurate.

“The continued use of these names would only honor the non-Indian ideology created by dominant mainstream society, whose ancestors directly or indirectly killed, sold, removed, or demoralized the original Indian residents,” the tribes state in the letter.

Read the full letter from the tribes here 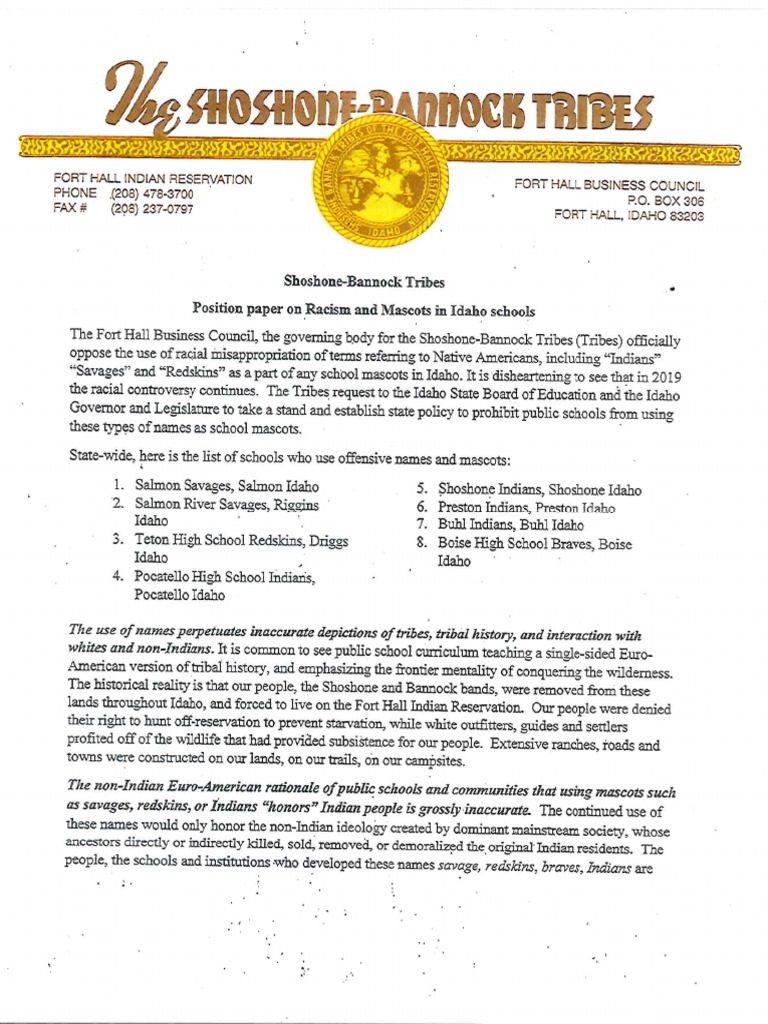 The tribes took the issue to the state because, they say, they wanted to go beyond the “local misunderstandings of towns and communities” and would rather see the state board of education set the example.

Little told KTVB that he wants educators to focus on teaching the kids instead of state mandates.

"When I talk to educators, they're always concerned about too many mandates from the state on whatever, where is the line, where would it be,” he said.

Overall, the tribes said in the letter the use of these mascots not only depicts tribal history incorrectly, but it also creates harmful attitudes and perceptions about Native Americans.

“Every day the expression of racial misunderstandings, of lack of education of mainstream society of Shoshone and Bannock people and history, is seen on social media postings,” the tribes said. “It is absolutely harmful to retain these names, mascots, and to continue the misappropriation of American Indians.”

The tribe also requested that the state require a class for high school students on Idaho tribal government and history so they can better understand Native American culture.

“We willingly offer our Tribal Education and Tribal Cultural staff assistance to you in the development of an acceptable and accurate curriculum for this class and training,” the tribe said.

The Idaho Democratic Caucus provided the following statement on this issue, and on Teton School District retiring the use of the name “Redskins”:

"Congratulations to the Teton School District for taking action to change their mascot. It’s critical that the impacted communities, the tribes, are the voices that are heard and have the greatest weight in the discussion,” Sen. Cherie Buckner-Webb, the assistant minority leader in the Senate. “As a friend of the five tribes of Idaho and not a member, I find the misrepresentation of citizens by means or use of caricatures totally inappropriate, culturally insensitive, and disrespectful. The use of such “mascots” are offensive to all indigenous people. It is well past time that we treat all people with dignity and respect."

We reached out to the Shoshone-Bannock tribes, who said they couldn't comment at this time.

A spokesperson for the Boise School District also declined to comment for this story, because they're currently discussing this issue with the tribe.