'I love the kindness in the community': Boise State’s new president lays out her vision for the future 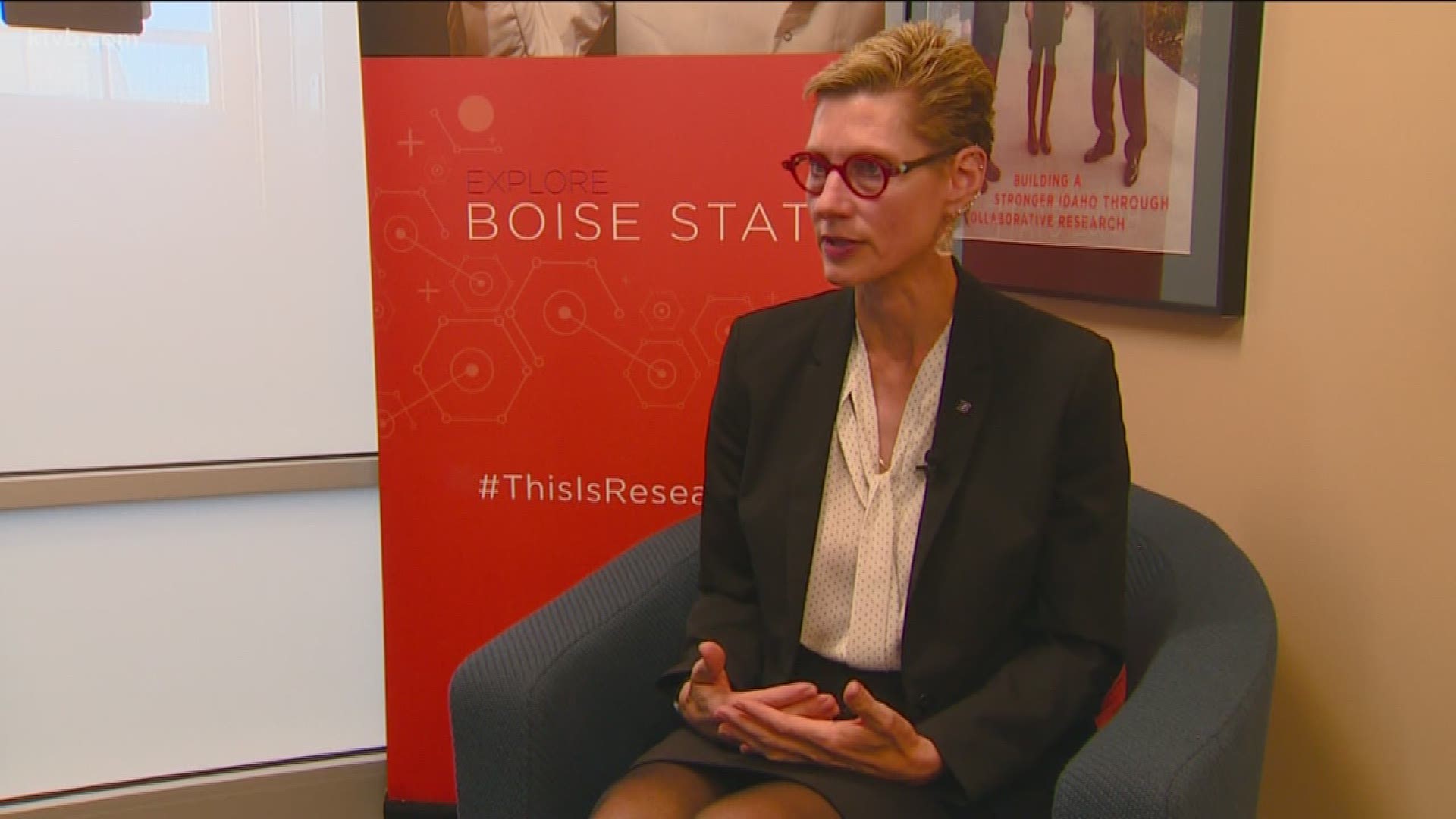 BOISE, Idaho — Boise State University's fall semester begins in just two weeks and so does a new era in leadership.

Dr. Marlene Tromp began her tenure as Boise State's new president in July, and she is already hitting the ground running when it comes to her vision for the school's future.

"I think college is a transformative experience," Tromp said. "I think it changes people's lives so they can change the world. And I can't imagine a better job where what I get to do is work with an organization that that is the mission."

Tromp comes to Boise State from the University of California Santa Cruz where she launched faculty development initiatives, new support programs for staff, and led the community in the creation of a new Strategic Academic Plan.

She was also the dean of Arizona State University's new interdisciplinary College of Arts and Sciences and the vice provost of the university's West Campus. Tromp was praised at Arizona State for overseeing new academic programs, including a new interdisciplinary forensics major and a cyber security initiative, and for creating mentoring programs for first-generation students.

She says Boise State's advancements in innovation was one of the factors that attracted her to the position. In 2019, U.S. News and World Report named Boise State as one of the most innovative national universities in the country. She says she looks forward to building on that momentum.

"They're already on a trajectory of doing these incredible things here, and so I'll keep supporting those efforts," Tromp said. "It's absolutely important for me to continue to support research."

The Green River, Wyoming native is the first in her family to graduate from college. It's an accomplishment she's just as proud of as becoming Boise State's first female president.

"I think of myself as the president of Boise State. I don't think of myself so much as the first female president," Tromp said. "But I know how much it can matter to young people to see somebody who represents their group, whatever that group is, ascend to a position to where they're getting to do that servant leadership for an organization."

Tromp says she'd like to see the university reach out to more rural students.

"I would really like to see some programs that reach out actively to those rural parts of the states because so many folks in the state live in small towns, like the one I grew up in or even smaller, and to make available to them a clear sense of what they can do," she said.

Tromp's tenure will begin as Boise State continues to see an enormous amount of growth in its student population. Enrollment is up nearly 15% in the last five years, and a whopping 55% since 2000.

"How do we grow in a way that is healthy as the city and the state continue to grow and how do we make sure we're tending to the things people care about," Tromp said. "Because when people say, 'Stop the growth,' often what they're saying is that underneath that sentiment, there is some specific things they don't want to lose and we need to understand what those things are and really foster them."

Boise State's win in the 2007 Fiesta Bowl no doubt put the university on the map, and Dr. Tromp recognizes the importance of both athletics and academic programs.

"One of the really exciting things about Boise State, that isn't necessarily true nationally, is that the creativity and innovation that's associated with that blue field, you know people being scrappy, and creative and gritty and figuring things out and striving, that's what we see on the academic side of the house, too" Tromp said. "And so our athletics and our academic programs, they share a common philosophy. Athletics is often the front door that people come to to learn about the university, it gives people an awareness of the university.

"What we'll strive for is making sure that now that we've knocked on the door with our athletic programs that people know about all the amazing things that are going on here," she added.

During her interview with KTVB, Tromp took time to respond to the group of 28 Idaho Republican lawmakers who sent a letter to Boise State University calling the school's efforts to create inclusivity, diversity and equality "disconcerting." The lawmakers said the programs add unnecessary costs and that BSU officials should focus on academic excellence.

"The letter was really an opportunity for us to begin dialogue with people, and if people are thinking those things and not reaching out to the university, we lose an opportunity to talk to each other," Tromp said. "And because community is so important to me, I really do want to understand what is it that underlies those concerns, and help me understand them in an fundamental way. What is it that you feel and think and care about? Where do we have shared interests? How can we work together? And so I'm very invested in understanding what people think and care about. And I'm very invested in making sure we're serving our whole community and all of our students. And that's something that's a priority to me."

Tromp says maintaining and improving Boise State's sense of community will also be top priority. She wants to create a profound sense of shared mission, not just with students, faculty and staff, but with the community.

"I love the kindness in the community. It was like this wonderful added bonus once I got here," she said. "And I think it's possible for us to create even more sense of community. And in a place like Boise and in a state like Idaho, people genuinely care about that. And so that's a thrill for me."