The complaint says school districts have been charging students unconstitutional fees, on the grounds of free public education and taking of private property. 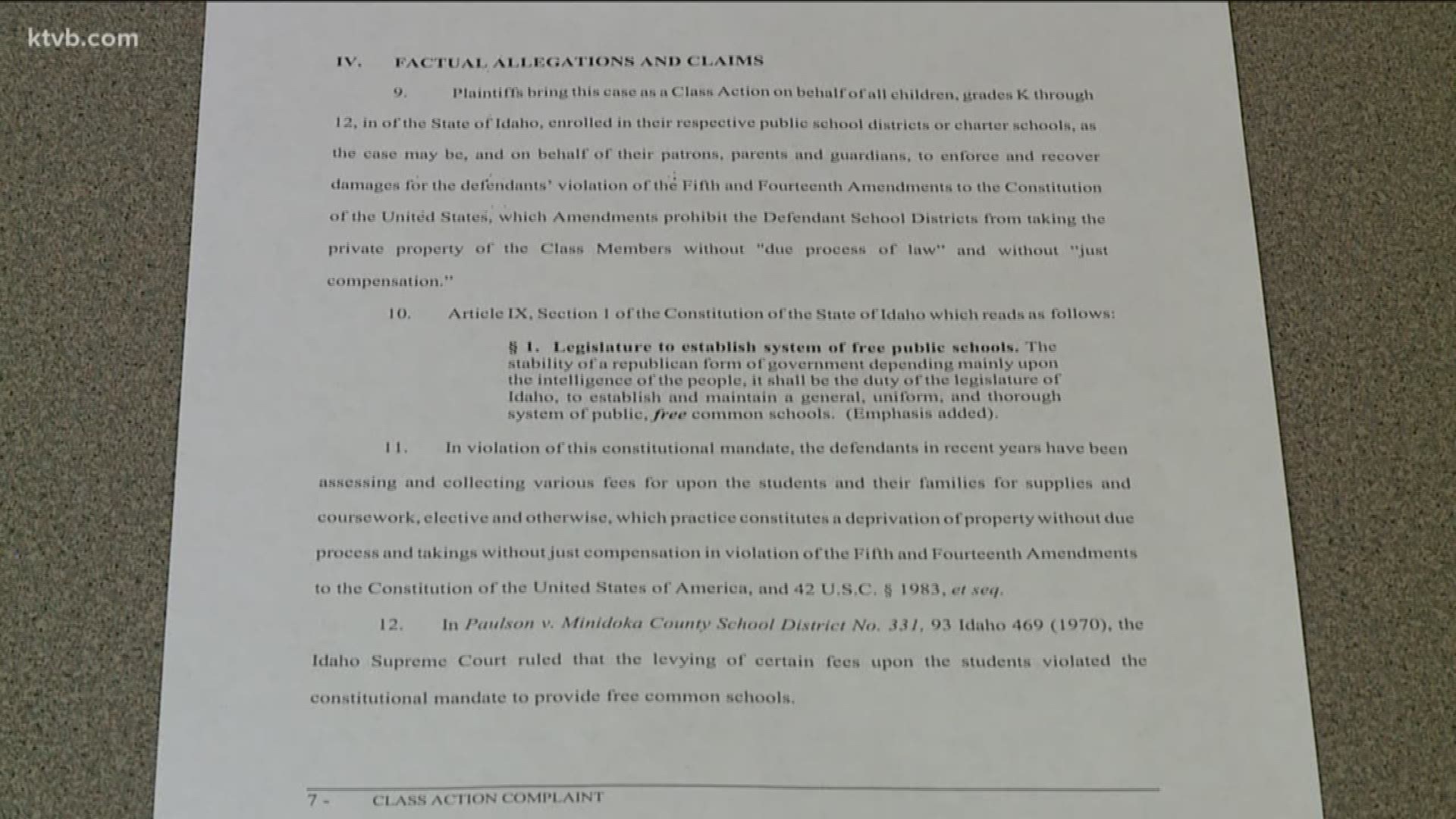 The suit lists every school district as defendants and every K-12 student and their parents or guardians as plaintiffs. The lawsuit claims their rights have been violated under the Idaho and U.S. Constitutions.

Former Idaho Supreme Court Justice Robert Huntley and attorney Jason Wood filed a class action complaint in late May, but it is not certified yet. The districts have been served, they say, and they are waiting for all of them to respond.

This class action complaint says school districts have been charging students unconstitutional fees, on the grounds of free public education and taking of private property.

The basic motivation of this lawsuit is this:

"The constitution provides that the Legislature shall provide free common public schools, which includes charter schools. And what's happened in Idaho is we've been underfunding very badly," Huntley told KTVB. "It's sophistry to say you're for education if you don't want to fund it."

The attorneys want this class action lawsuit to send a message to legislators to increase our state's budget and allocate more money for public schools so districts don't have to charge fees.

"It's really a hardship on a lot of families," he added.

Legislature to establish system of free public schools. The stability of a republican form of government depending mainly upon the intelligence of the people, it shall be the duty of the legislature of Idaho, to establish and maintain a general, uniform, and thorough system of public, free common schools.

The class action lawsuit argues schools are unlawfully depriving and taking "private property without due process of law or just compensation", violating the Fifth and Fourteenth Amendments of the U.S. Constitution. The suit says school districts across the state are charging $20 million of unconstitutional fees every year.

"Most of them can absorb it within reason," Huntley said.

The complaint notes previous court cases they believe laid the groundwork for this suit: a 1970 Idaho Supreme Court case, Paulson v. Minidoka County School District No. 331, 93 Idaho 469, where the court ruled "the levying of certain fees upon the students violated the constitutional mandate to provide free common schools."

More recently, there was the Joki v. State, Case No. CV-OC-2012-17745, in which a judge ruled the West Ada School District could no longer collect certain fees. Based on that case, this lawsuit asks the judge to grant restitution or reimbursement to all plaintiffs dating back to October 2012 when the suit was filed. The complaint states:

"Plaintiffs, through this action, seek a declaratory judgment and return or restitution, or damages in the amount, of such fees assessed and collected by the defendants in their continuing violation of the Fifth and Fourteenth Amendments to the U.S. Constitution, and 42 U.S.C. § 1983, beginning no later than October 1, 2012, when suit was filed in Joki v. State, Case No. CV-OC-2012-17745, giving notice to all school districts in the State of Idaho of the then-potential class action involving every school district and every charter school in the state, until the present, and for declaratory and injunctive relief from the ongoing unconstitutional fee imposition practices."

Huntley is asking the court to determine which fee categories aren't constitutional, including fees for curricular and co-curricular activities and programs and other "new categories coming up in recent years".

"There are four categories involved in this case; basically there are the what's called curricular fees where credits are awarded. Then there's co-curricular, which is a hybird between what used to be called extracurricular and curricular. Co-curricular are things like band, debate, music in general, and athletics. And co-curricular is a category that should not be charged fees because state funds are used to pay for coaches and other facilities and so forth," Huntley explained.

"The idea that you can't play football unless your parents can afford to get your uniform cleaned for you and buy shoulder pads and all that, that deprives a lot of kids of the ability," Huntley added.

"Painting all of us with a very broad brush and that's unfair," Hill said. "I think it's really unfair this lawsuit has targeted individual school districts, like the Boise School District who's doing everything we can, everything within our power to... remove those fees for our students. To include us in a political fight that is really over what the Legislature has or hasn't chosen to do."

"We are completely and totally confident that we are not only compliant, we have gone above and beyond what is required by Idaho code," Hill added.

Boise Schools says their board decided to remove financial obstacles for students, meaning they spend hundreds of thousands out of their general fund each year rather than charge those fees.

"It's really about equity; your financial situation in life should not determine the quality of education that you get. That's a core belief of ours," Hill told KTVB. "I don't look at it like we're eating those dollars. I don't think our patrons do. I think they look at that as an investment we're making in those classrooms and the activities for those students."

Hill says the ruling in the 2012 case against the West Ada School district and the Idaho Supreme Court rulings were clear regarding what fees public and charter schools can and cannot charge.

"However there are still a number of gray areas and obviously that's a decision each local school board can and has to make depending on what their patrons are comfortable with. Our board has been very clear that wherever we can we're going to remove any kind of financial obstacle to our kids and our students in activities they want to pursue," Hill said.