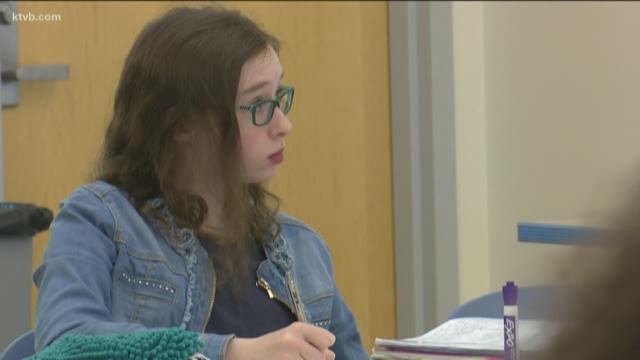 At just 14, she is enrolled full time at Boise State University working toward degrees in piano performance, math and physics - while holding her own among students who are much older.

Finn is the first to admit she took an unconventional path to college.

She was reading before age three, and performing well enough to skip classes early in grade school.

Teachers weren't always on board.

"When I was actually in second grade, I was looking into going into fourth grade and the teachers responded saying I wasn't emotionally mature enough, even though I was completely academically ready - already taking 4th-grade math," she said. "That's a really big problem for a lot of gifted students. They just have to go through public school and they hit a wall because they're bored."

RELATED: 'She's just relentless': 14-year-old Boise State student excels in and out of the classroom

Finn's parents quickly realized that wasn't an option for her. She ended up at the Treasure Valley Math and Science Center, a school specifically for gifted children, where she was in seventh-grade classes by 9 and splitting time between high school and college by 13. Finn ultimately opted to leave high school without graduating to enroll at Boise State fulltime.

She doesn't regret the decision.

"Lots of people have had high school experiences and I haven't, and that is kinda weird," Finn admitted. "But then again, I don't feel like I need that because it would've been just another barrier to me in my education, because I would've had to take classes that really wouldn't be helpful to me in order to pass and get a high school diploma. But now that I am at Boise State, I don't need one."

It would be easy to assume Finn is the only kid of her kind at Boise State. But, as she recently discovered, that's not true as all.

RELATED: Olympic gold medalist teaches kids in Meridian to not be afraid to fail

Eight students under 16 are currently enrolled at Boise State and even more take classes part-time. Finn says she has not met any of the other young full-time students - and that gave her an idea.

"There must be so many different part-time and full-time young undergraduates on campus that I just don't know," she said.

To remedy that, Finn is starting the Early College Club - a campus gathering where accelerated learners like herself can meet up, connect and get support from one another.

Credit: Chase Biefeldt/KTVB
Pangaea "Gigi" Finn listens during one of her classes at Boise State.

Dr. Joe Champion, an associate professor of mathematics at Boise State will serve as an advisor for the club. He's no stranger to the unique struggles of being the youngest in a lecture or study group.

"I ended up graduating college at the age of 18, so yeah, I've got a really good sense sometimes of what it was like to feel a little out of place in college," Champion said.

"They can provide peer support to one another, and ultimately I think they can keep some continuity instead of each student that shows up to campus trying to figure things out for themselves," he said. "They'll have a group of people here on campus who have been there and done that, and can help each other succeed socially and academically."

RELATED: West Ada teacher immerses students in the science of the Boise River

Finn's parents agree, saying the club could function as a sort of experience bank for its members to draw on as they take on different experiences and challenges in college.

"They'll have the ability to network at that 14- to 16-year-old perspective," Sean Finn said. "Somone would have solved the challenge, someone else would have explored and understood, or found a new one and they'll be able to work on those things together."

The group is also aimed at helping students advocate for themselves with professors and administration when it comes to their unique paths to a degree. Finn and Dr. Champion and are still working through the details of the club, and expect it to get its start in December.

Once it is off the ground, Finn said, she can work on finding and recruiting other bright young people at Boise State like her.

"I'm excited to connect to other early college students who are having the same kind of experience in that situation," she said.