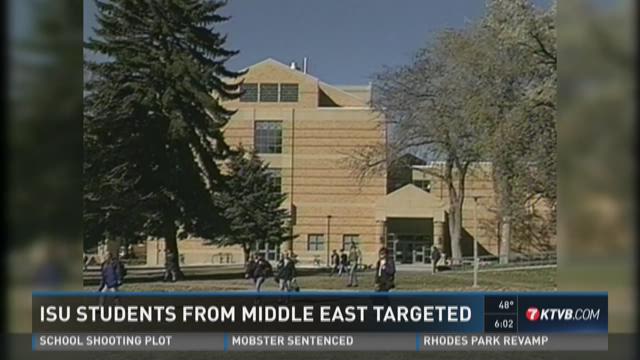 Pocatello Police tell KTVB that the stabbing happened around 11:45 Wednesday night. Police say the man was walking in an alley when two men approached him and stabbed him. Police say he suffered two puncture type wounds in his right arm, and was taken to the hospital. They say he was released and the wounds were not serious.

Police say the suspects made derogatory Middle Eastern comments to the victim during the attack. It's unclear whether the man is an ISU student, but police say he is a long time resident of Pocatello. Police say the incident has not been classified as a hate crime as this time.

Police say right now, they have no leads on suspects connected specifically to the crimes targeting Middle Eastern people. Police say the FBI has been notified and has been in contact with the ISU president.

Pocatello Police say there have been 73 residential burglaries in 2016, with 23 Middle Eastern victims.

Meanwhile, students told KPVI they are frustrated, scared, and fear for their safety.

Students shared pictures of hateful messages left on car windshields, and showed how shot were fired or rocks were thrown at their cars.

The students told KPVI they wanted to remain anonymous, but said they are terrified, and some said they would not be returning to ISU.

On Thursday, U.S. Attorney Wendy Olson visited the Pocatello campus to encourage students to stand together during this tough time.

"I hope that you will stand with each other most importantly and not only build up a resistance to intolerance and acts of backlash against anyone in our community but lSU stand with your law enforcement because we are here to help you make this a safe community," said Olson.

Olson met with Muslim, Arab and other International students after the news conference to discuss their concerns. She also talked about the civil rights statutes that protect them.

“We don't have any evidence that I know of that anything came from the campus itself,” Vailas said. “We have almost 70 countries at ISU represented. And the university is one of the safest campuses in the country."

"I hear stories from students now, but I cannot confirm them,” Abughara says. “But at the same time I know that there is something going on. Still, I would never generalize, and these are personal incidents that will be taken care of."

Community leaders and the university is working to make sure all students feel safe.

Vailas says all of the burglaries have been reported to the Pocatello Police Department, but so far no arrests have been made.

The following is the letter Vailas sent to students on Wednesday:

Dear Members of the ISU Community: Students, Faculty and Staff:

Idaho State University has been informed that approximately 50 of our students from Kuwait and Saudi Arabia have been victims of off-campus home burglaries over a period of several weeks. To the best of our knowledge, all of these burglaries have been reported to the Pocatello Police Department, who are actively investigating these crimes. In some cases, personal documents were stolen and hateful and hurtful messages were left behind. These burglaries are in addition to the vandalism of 17 vehicles, including some belonging to international students, on July 17, 2015 along the Bartz Way roadway from Schubert Heights to the McIntosh Manor area. The Pocatello Police Department apprehended the perpetrator. Although recently reported on some social media, incidents of physical abuse and harm targeted at Kuwaiti and Saudi students have not been verified or reported to the Pocatello Police Department.

As we can all imagine, home invasions invoke fear, sadness, anger and bewilderment. Our hearts go out to these affected students as well as their peers, who worry that they may be next. These students are far away from home and family and have chosen to attend Idaho State University for its reputation for high quality educational programs in a safe environment. As a result of these crimes, some of our students are seriously considering leaving ISU and Pocatello. This would be a devastating loss for our community and would earn us an undeserved reputation for discrimination, bias and racism.

As you know, the safety and security and wellbeing, both physical and mental, of our students are our preeminent focus. Any harm to our students impacts all of us negatively by diminishing the quality of our life because how can any one of us feel safe if others are in jeopardy? Our ability to attract and retain students who seek a college degree will be impacted because any crimes against students will discourage students from Idaho, the U.S. and the world from enrolling here. And lastly, harm to any person impacts our humanity. Pocatello is known as a welcoming and compassionate community. Mayor Brian Blad has been meeting regularly with international students throughout his tenure to ensure that they feel welcomed and any concerns are heard. It’s a reputation we don’t want to lose because of the actions of a few whose values are inconsistent with those of the majority. In Pocatello we care about our neighbors—and we’re all neighbors.

Let us join together to demonstrate to the world that Idaho State University and the City of Pocatello are communities whose 21st Century values reflect intellectual and creative endeavors and achievements, care and concern for the individual; and appreciation and support for diversity in its many forms.

Most importantly, please help us reach out to our international students, especially, our students from Kuwait and Saudi Arabia. Let them know that we want them to stay. In the ISU Student Handbook, I remarked that, “In addition to being scholars in the classroom and laboratories, our students are making a difference both here and abroad.” Our international students will carry messages home about what America and Americans are like. Many will become important business and civic leaders who will influence others’ perceptions of America.

If you are a student and need assistance, please contact the Vice President for Student Affairs Office. Academic Affairs, Student Affairs and the International Programs Office are here to assist and support all of our students.

Thank you for being a member of our caring community. Best wishes.