The 59-year-old man died from his injuries and police were trying to locate the dog to return the companion to his family. 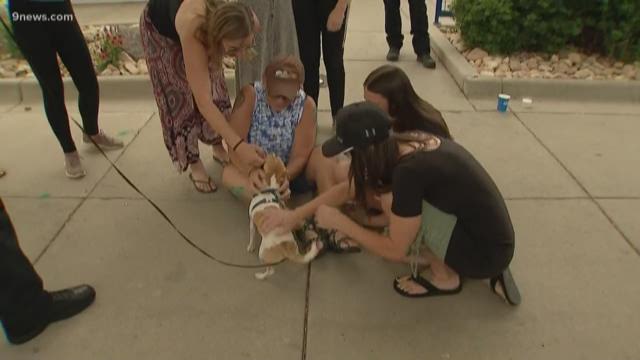 LONGMONT, Colo. — A dog who was taken from a Longmont 7-Eleven store by a woman after his owner had a seizure and later died has been found, according to Longmont Department of Public Safety.

The department's deputy chief was driving down Main Street Wednesday afternoon when he happened to see a dog that appeared to be Sampson. He contacted the couple and confirmed it was the missing dog, an updated Facebook post says. He'll now be reunited with family members of the victim.

Earlier in the day, the department released photos of a woman they said took the dog from the store on 1650 North Main Street Tuesday night while his owner was being attended to by medical personnel.

Sampson's owner, a 59-year-old man, hadn't been feeling well all day and decided to walk to the store Tuesday night with his dog, according to police.

While at the store, the man fell, suffered a seizure and was taken to the hospital. He did not survive his injuries, police said.

Video of the incident at the store indicates that a woman removed the man's dog from the scene while police and fire were responding to aid this man, a Facebook post says.

Credit: Longmont Police
A photo of a woman who police said walked off with a man's dog after he had a seizure at the store

Police aren't sure what the woman's intentions were when she left with the dog. She has not yet been located or identified even though Sampson has been found, according to police

Credit: Longmont Police
A photo of a dog taken from a store after a man had a seizure

If you have information that would lead to the identity of the person in the attached photos, contact the Longmont Police Department at (303)651-8555. You can reference LPD Report #19-7137.