Oregon's two senators called for a vote on H.R.8, a bill that would require a background check for every firearm sale. It already passed the House in February. 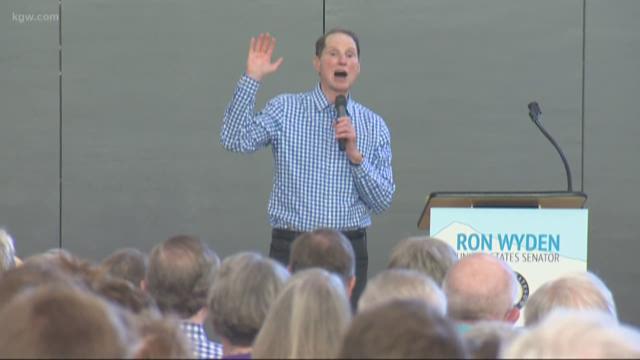 The horrific mass shootings in El Paso, Texas and Dayton, Ohio have reignited the gun debate in America. The topic was front and center Sunday at Democratic Senator Ron Wyden's planned town hall in Beaverton.

"When it comes to gun violence, which, of course, has hit Oregon too often, Oregonians are tired of meaningless words. What they want is meaningful action," Wyden said. "And it all has to start on the floor of the United States Senate. And that’s what I’m going to be pushing for."

Wyden spoke to a welcoming crowd at the Conestoga Recreation and Aquatic Center. Among the constituents were gun-control advocates such as Debbie Lindgren, local group manager for the Portland chapter of Moms Demand Action.

"We don't have to live like this. We should be able to go to our schools, our restaurants, our Walmarts and not be [in] fear of getting shot," Lindgren said.

The town hall comes as Democrats call on Senate Majority Leader Mitch McConnell to end the August recess so that senators can take up a bill on gun control.

"What I will do is be on the very first plane to make sure that I make that vote," Wyden said.

Rep. Suzanne Bonamici, a Democrat who serves Oregon's 1st District, called on McConnell via Twitter to "immediately schedule a vote."

Bonamici was calling on a vote for the bill, H.R.8, known as the Bipartisan Background Checks Act of 2019, which would create new background check requirements for gun transfers between unlicensed individuals.

Some say the bill infringes on their Second Amendment rights. Others say the measure doesn't go far enough.

President Donald Trump responded to the mass shootings on Sunday, as well.

"Hate has no place in our country. And we're going to take care of it," Trump said.

The president extended condolences to both states and praised law enforcement in a brief statement to the media. He said he spoke with the attorney general, the director of the FBI and both governors about what can be done to prevent these types of mass shootings.

"We're talking to a lot of people and a lot of things are in the works. A lot of good things. We have done much more than most administrations and it's not really talked about much. But we've done actually a lot but perhaps more needs to be done," Trump said.

Oregon Sen. Jeff Merkley, a Democrat, called out Trump and McConnell on Twitter, posting in part, "Stop cowering to the NRA. It is past time for a full debate on the Senate floor on every idea that can help reduce these massacres."

"We must all stand in solidarity against acts of white supremacy, racism and discrimination and the evil nature of its manifestation in violence," Walden's statement read, in part.

The background check measure Democrats are pushing for passed the Democrat-controlled House in February 240 to 190, with two members not voting.

Walden voted against that bill. KGW reached out to Walden's staff for comment but have not heard back.