Scott Riggs was sentenced to 45 years in prison, even as his defense team made a last-minute bid to pin the crime on the suspect's late mother instead. 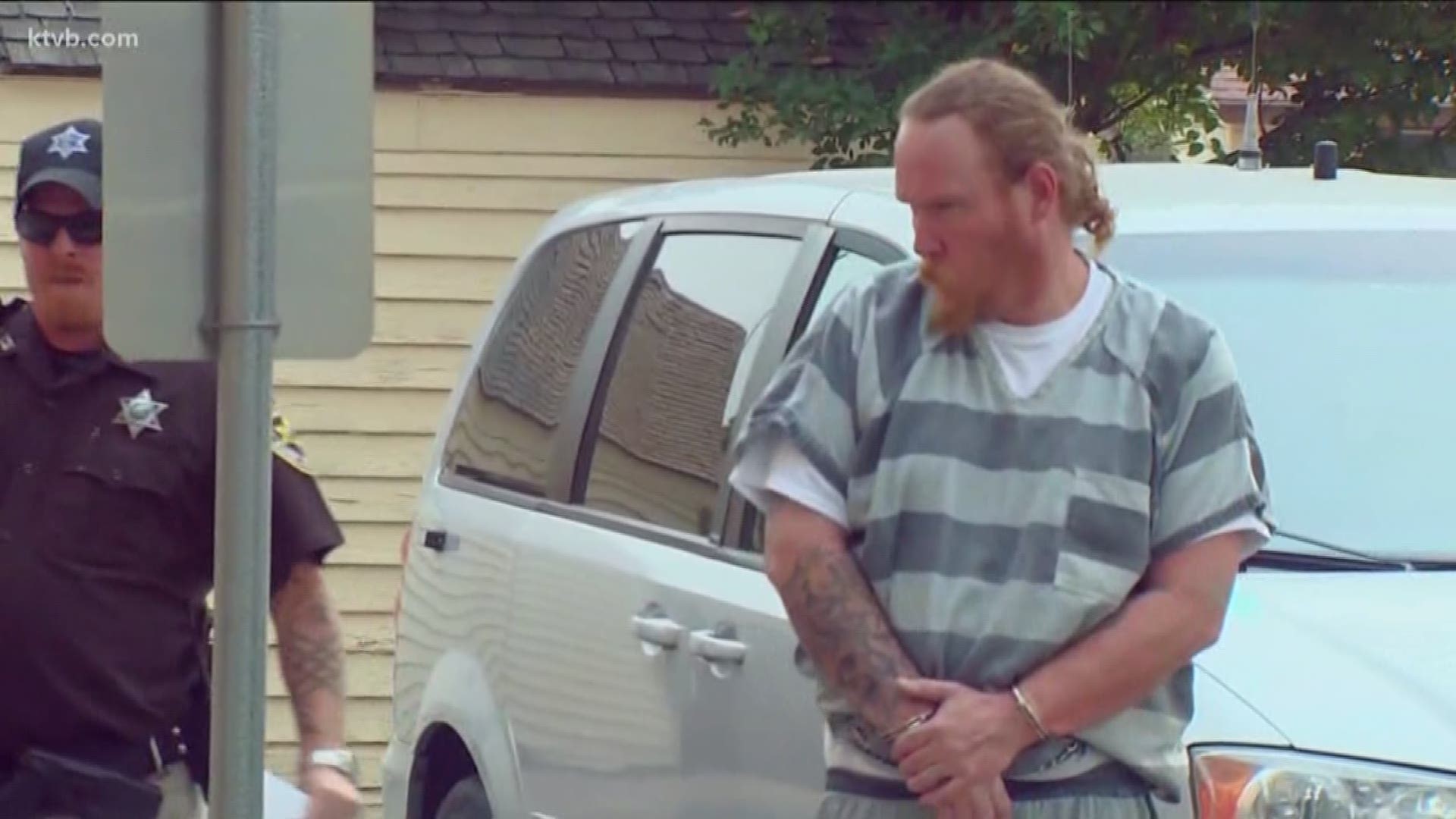 MOUNTAIN HOME, Idaho — A Mountain Home man who pleaded guilty to murder in the death of his landlady was sentenced Tuesday to 45 years in prison, even as his defense team made a last-minute bid to pin the crime on the suspect's late mother instead.

Scott Eugene Riggs will serve at least 20 years behind bars before he can become eligible for parole.

Riggs was arrested in September 2017, days after the body of 71-year-old Paula Ferbrache was discovered inside the trunk of her own car, which had been abandoned in a field. She had been stabbed eight times.

Ferbrache's husband said she was dissatisfied with how Riggs and his family were taking care of their house as tenants, and had resolved not to renew their lease on the property when it ran out in October. Still, when Riggs approached the victim the day she disappeared, claiming he was having car trouble and asking for a ride home, she did not turn him down.

That was her way, John Ferbrache said.

"She took care of everybody," he said. "She's gone today because she even helped him out. When he called for help, she went to help him."

"In return, Scott Riggs tortured and killed her."

Two distinct versions of the killing emerged during Tuesday's hearing.

In one, Riggs is a savage if somewhat incompetent killer, calculating enough to fashion a homemade blindfold and ball gag ahead of time, but apparently lacking the foresight to clean his prints off Ferbrache's car or realize that police would quickly hone in on the last person seen with the victim as a suspect.

In the other version, put forth by Riggs and his attorney in a written explanation filed just two days before the sentencing, it was his mother who stabbed Ferbrache. Although his own involvement was limited to merely hosing the victim’s blood off the driveway and helping dump her body in the pasture, Riggs claimed, he took the fall - staying quiet about his mother's involvement out of a sense of loyalty until after her death.

Prosecutor Daniel Page urged the judge to reject that theory, arguing that there was nothing to tie Juanita Jones to the murder, while a mountain of evidence connected Riggs to the crime.

Surveillance cameras captured video of Riggs waiting on a bench near Ferbrache's car outside the Walmart where she worked on the day she disappeared. Riggs told officers later that he had been there to buy drugs as part of a deal he had set up through Facebook Messenger, but a review of his phone and social media accounts turned up no such messages, a detective testified.

Likewise, although Riggs claimed he had been unable to start his truck because of a loose battery cable, his pickup battery showed no signs of being worked on, according to investigators.

After the discovery of Ferbrache's body, investigators found Riggs' palm print on the trunk of the victim's Buick, and his fingerprint on the passenger door. A small amount of her blood was found inside his pickup. .

Ferbrache's cell phone was found out in the desert along with the murder weapon - a  knife Riggs had bought at a pawn shop before the stabbing - as well as a makeshift ball gag and blindfold made from materials investigators later found inside Riggs' bedroom, and a 4XL T-shirt that matched the size of other shirts that belonged to the defendant.

In interviews with detectives, Riggs gave several versions of the day's events - none of which mentioned his mother - and insisted that he had accepted a ride from his landlady, but had not harmed her.

Riggs was originally charged with first-degree murder, but the case ended in a mistrial in February. One week before his second trial was set to begin, he took a plea deal that reduced the charge to second-degree murder. Riggs entered an Alford plea to the murder charge, meaning he maintains that he did not kill Ferbrache, but acknowledges that prosecutors have enough evidence to convict him.

The allocution - the document Riggs' defense team says spells out what really happened - was filed Monday, more than a year after his mother's death from an overdose.

Defense attorney John Kormanik said Riggs' relationship with his mother was "forged in the fires of abuse" after a childhood spent watching her be beaten by the men she dated. His need to protect her ran so deep that he could not bring himself to tell the police the truth about what his mother had done to Ferbrache, the lawyer said.

"Over a lifetime, Mr. Riggs had protected Juanita Jones from the time he can remember," he said.

Stuart Robinson, an expert witness hired by the defense, argued that the evidence pointed to more than one person being involved, suggesting that investigators bungled the case and failed to follow up on leads.

Robinson pointed to the seat positions in the victim's car, what he believed to be a second set of tire tracks in the field, pine needles on the victim' clothing and an untested black hair on Ferbrache's sock as evidence that the murder had occurred at the Riggs family's home, not the pasture where her remains were found.

He also questioned why Jones was "spring cleaning" with bleach when deputies arrived at her door to perform a search warrant, and suggested that her statements to detectives that her son "wouldn't do this" were blithely passed over by law enforcement who already had their target in mind.

Kormanik asked for a five-to-20 year prison sentence, stressing that Riggs was "eternally regretful" for his role in the crime.

But Page, the prosecutor, argued that the defendant had taken two years to invent a story that explained away the evidence against him - and had conveniently pointed out an alternate suspect who was no longer alive to speak for herself.

He urged the judge to think of the pain and terror in which Ferbrache must have spent her last minutes, asking him to hand down a hefty sentence.

Judge Thomas Ryan agreed, pronouncing the 45-year sentence to an audible collective exhale from the gallery, most of which was filled with Ferbrache's friends and family. Several people ran from the room, while other hugged and wiped away tears.

The end of a long-drawn-out case can bring closure. But a prison sentence does not bring back the dead, or erase the pain of those left behind.

As he spoke of his wife as the hearing began, John Ferbrache said even a lengthy prison sentence would not unwind the hurt.

"It's devastating," he said. "She was somebody I looked for all my life."