There are nearly 600 fewer crimes this year compared to the same time last year. 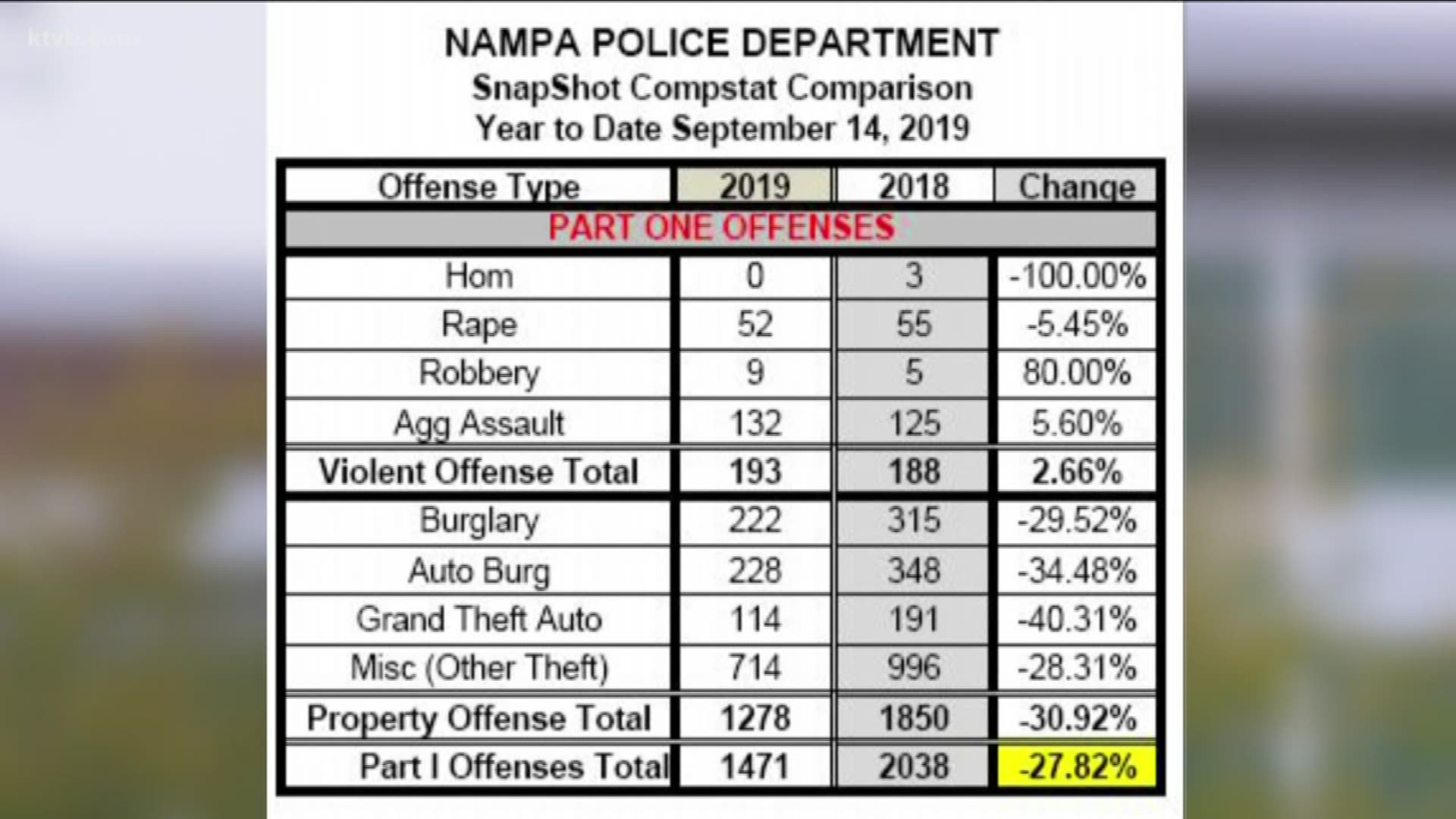 NAMPA, Idaho — A new style of policing is reducing overall crime rates in Nampa, according to police officials.

In June, the Nampa Police Department switched over to CompStat policing. This gives the department real-time data about where crime is happening, and it shows officers certain trends in the city. The valuable data informs department leaders on what areas of town should be more heavily patrolled.

"With CompStat, being able to pull those numbers out and have real-time data and have that info, we know where we need to deploy the resources we have to have the greatest impact,” Nampa Police Capt. Curt Shankel said.

Before they launching the process in June, department leaders traveled to Coeur d’Alene and Salt Lake City to speak with officers there on how they use it, what challenges they've encountered, and what changes would need to be made to make it effective in Nampa.

This year, the department said there have been nearly 600 fewer victims of serious crimes, also known as Part I crimes, which range from homicide and rape to burglary and auto theft.

RELATED: Nampa Police change their tactics to crack down on illegal opioid traffickers

“That's 600 people in our community that haven't had to go to the hospital and lose work time,” Shankel said. “They didn't get their car stolen or home broken into, these are people that weren't victimized.”

A primary benefit of CompStat is that it helps identify problem areas throughout the city -- Whether it’s an area where certain crimes are being committed or a bad intersection where crashes are prevalent.

"We've seen some significant drop in our Part I crimes year to date, about 30 percent,” Shankel said.

Officials attribute the drop to the more proactive style of policing the department has been able to do since June.

The number crunching job belongs to two people. One of them is Kenneth Keene, an analyst with the department.

"Crunching numbers, dealing with officers coming with new ideas and dealing with command staff saying we see this trend, can we work on a project or develop a project for this area,” Keene said, describing a normal day for him.

His office is flooded with maps that show different crimes and different trends happening around the city.

"Every day, we download the database and comb through it for everything that happened the last 24 hours, as well as seven days, four weeks and year,” he said.

When the department starts to see a trend emerging, whether it’s a rash of injury accidents at a specific intersection, or an increase in thefts in a neighborhood, they can target that specific area.

“You always want more, you're always changing and going out and finding new problems,” Shankel said.