Nine months after Lori Vallow's kids disappeared, Rexburg PD confirmed that the remains found on her husband's property were of two children. 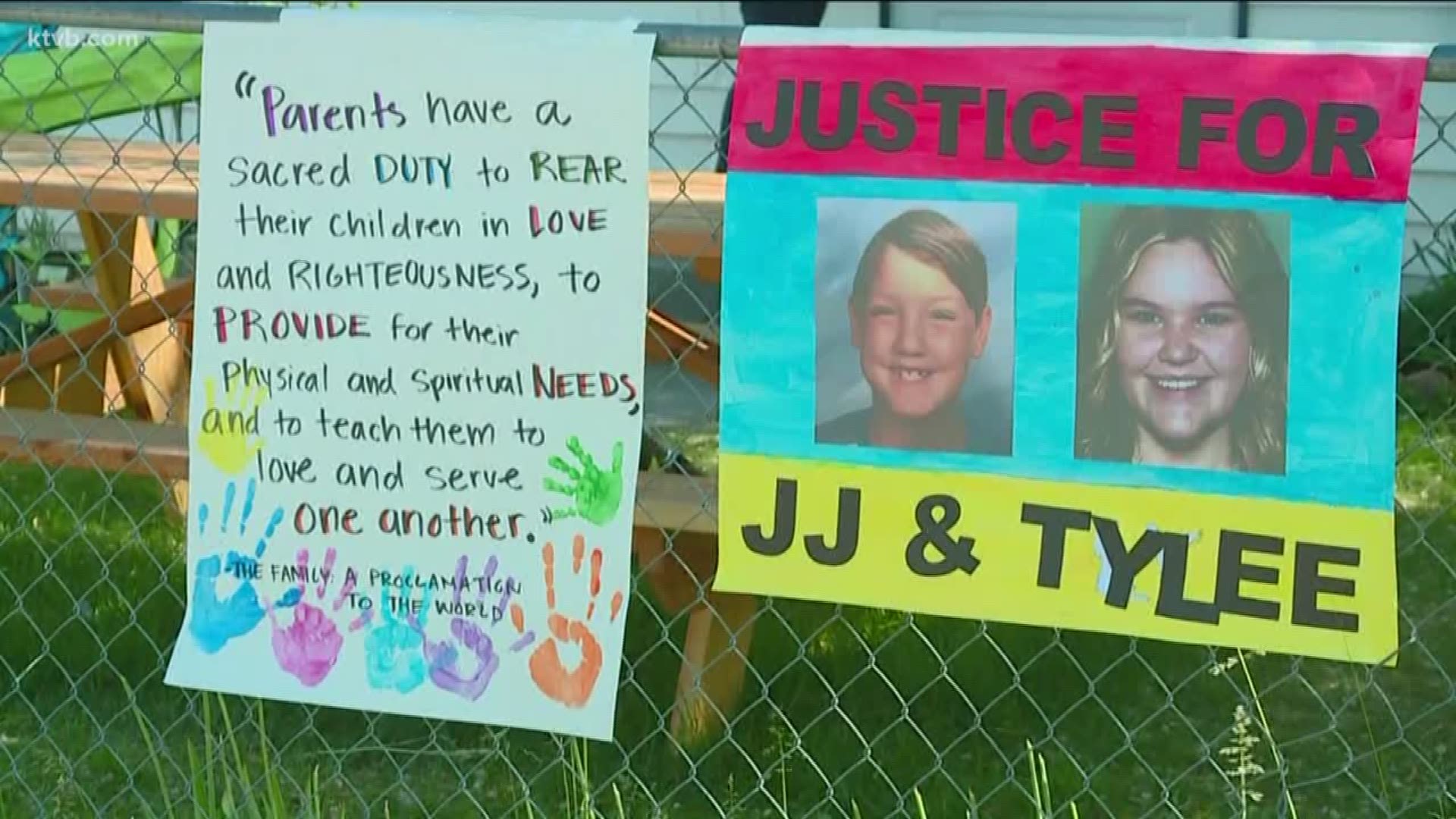 In a statement, JJ's grandparents, Larry and Kay Woodcock, and Tylee's brother and sister-in-law, Colby and Kelsee Ryan, said they are "filled with unfathomable sadness that these two bright stars were stolen from us, and only hope that they died without pain or suffering."

They added that law enforcement will make the official confirmation of the children's deaths and asked for privacy while they grieve.

"We have only just been told of the loss of our loved ones and need time to process," the couples said.

Grandparents of JJ Vallow visit site where remains were found

Tylee's aunt, Annie Cushing, also released a statement on Wednesday. In a Facebook post, Cushing said she spoke with the FBI and prosecutor's office who told her "neither of the kids has been positively identified."

Cushing added that she believes the children will be identified in time, but urged people to not jump to conclusions until law enforcement gives official confirmation.

"I know emotions are running high and the rush to an announcement is tempting, but cooler heads must prevail," she said.

Earlier on Wednesday, Fremont County Prosecutor Rob Wood confirmed that the human remains found on Daybell's property on Tuesday were in fact those of children, saying "This is an investigation into the deaths of children."

Daybell is currently facing two felony counts of destruction, alteration or concealment of evidence. Autopsy results are pending on the remains found.

Wood requested bond be set at $1 million, saying that while Daybell is a flight risk, the background and context of this case necessitate a higher bail.

Daybell's attorney, John Prior, argued that a $1 million bail was unfair for something that only carries a five-year penalty. He instead requested that Daybell's bond be set at $50,000 for each felony count, totaling $100,000.

Bond was ultimately set at $1 million. Should he post bail, Daybell will have to reside within the boundaries of Jefferson, Bonneville, Madison and Fremont counties, provide the court with his current address and wear an ankle monitor. He's also be required to keep in regular contact with his attorney and is not allowed to have any form of contact with his wife, Lori Vallow, the mother of two children missing since last fall.

Daybell was booked into the Fremont County Jail Tuesday afternoon after human remains were found during a search of his property north of Rexburg, authorities announced. He appeared in court at 11 a.m. Wednesday.

Watch below on YouTube: Chad Daybell appears in court

Police said at a news conference Tuesday afternoon that human remains were found when police, deputies and the FBI executed a search warrant of Daybell's property early Tuesday morning.

Assistant Rexburg Police Chief Gary Hagen declined to take questions but said more information would be released in due time.

Authorities arrived at Daybell's home in the 200 block of 1900 East around 7 a.m. to serve the search warrant.

Police confirmed to KTVB that the warrant was related to the disappearance of 7-year-old JJ Vallow and 17-year-old Tylee Ryan, who have been missing since last fall. The warrant is currently sealed.

Lori Vallow, Daybell's wife and the mother of the missing children, is charged with two felony counts of desertion and nonsupport of dependent children, as well as misdemeanors for resisting or obstructing officers, criminal solicitation to commit a crime, and contempt of court. She remains held in the Madison County Jail.

RELATED: Lori Vallow's friend believes JJ and Tylee are ‘not on this planet anymore’

Police have previously said both Vallow and Daybell have tried to mislead law enforcement about the children's whereabouts, and have repeatedly refused to say where they are, if they are safe, or what happened to them.

In addition to the missing children's case, both Lori Vallow and Chad Daybell are also under investigation in connection to the Oct. 19 death of Chad's late wife, Tammy Daybell. The woman's death was originally believed to be from natural causes but later ruled suspicious.

Those close to the couple say they had become obsessed with end-of-the-world scenarios, spiritual visions, and the idea that they had lived past lives on other planets.

Lori Vallow's late husband, Charles Vallow, also warned police that she had "lost her mind," had threatened to murder him, and that she might be a danger to the children.

"I don’t know what she’s going to do with them," he told a police officer in January. "Flee with them. Hurt them."

Charles Vallow was shot to death by Lori Vallow's brother months later, in July. The last confirmed sighting of JJ and Tylee came in September.

Statement from the Woodcocks and Ryans about the remains found on Chad Daybell's property:

The Woodcock’s and The Ryan’s are confirming that the human remains found by Law enforcement on Chad Daybell’s property are indeed our beloved JJ and Tylee. We are filled with unfathomable sadness that these two bright stars were stolen from us, and only hope that they died without pain or suffering. Once officially confirmed, statements from The Rexburg Police, The Medical Examiner and the FBI will be released.  We ask that you respect our family’s privacy while we grieve – we have only just been told of the loss of our loved ones and need time to process.  We are not granting interviews at this time and hope you all understand that this is the worst news we will ever get in our lives and want to be left alone for the time being. Thank You.