'Tell us where the kids are': Lori Vallow appears in Idaho court, judge lowers her bail to $1 million

The mother of two missing Rexburg children made her first appearance in an Idaho courtroom Friday afternoon for an arraignment hearing. 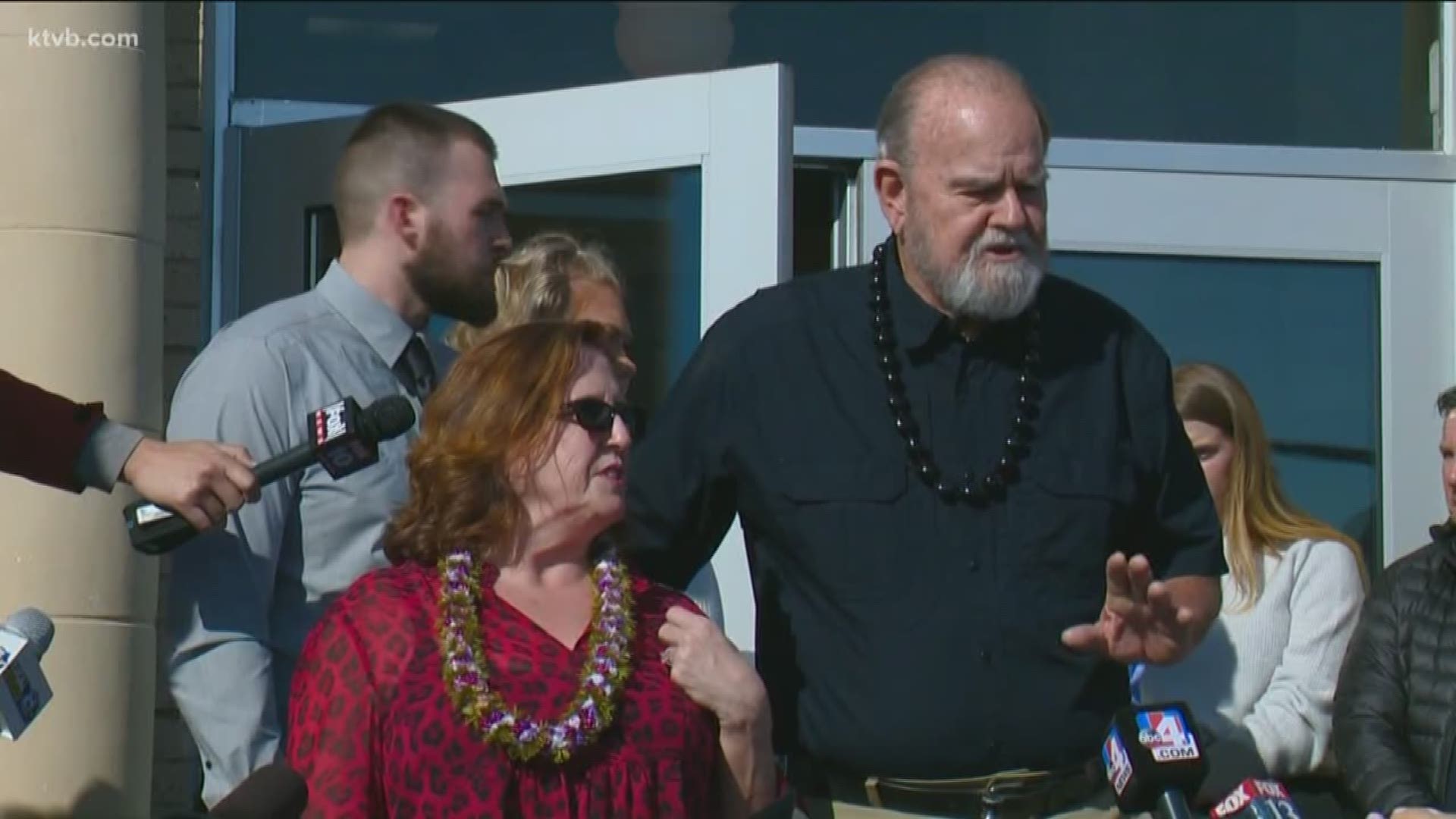 REXBURG, Idaho — All eyes were on Lori Vallow as she entered a Madison County courtroom Friday afternoon, wearing an orange-striped jail uniform, pink lipstick, and a slight smile.

Her new husband Chad Daybell, who police say fled with her to Hawaii after police started asking questions about Vallow's two missing children, sat in the gallery. Larry and Kay Woodcock, the grandparents of Vallow's 7-year-old, were there as well, along with her older son Colby Ryan, who strained to catch her eye.

"I want to see her, I want to get in front of her. Obviously, she's my mom and I'm very concerned about my siblings," Colby Ryan said.

Dozens of members of the media and the public packed the gallery as well, and hundreds more watched the court proceedings on their phones in the courthouse hallways.

The case of 7-year-old JJ Vallow and 17-year-old Tylee Ryan, who vanished without a trace in September, has captivated the country. Friday marked the first time Vallow has appeared in an Idaho courtroom. She was extradited back to Rexburg from Hawaii on Thursday, making the final leg of the journey in a tiny plane owned by Idaho State Police.

Vallow is charged with two felony counts of desertion and nonsupport of dependent children, as well as misdemeanor charges of resisting or obstructing officers, criminal solicitation to commit a crime, and contempt of court. Law enforcement still have no idea what happened to her children, and Vallow and Chad Daybell refuse to tell them, Prosecutor Robert Wood told a judge, calling it "frankly heartbreaking."

Watch the video of Vallow's court appearance below:

Wood argued that Vallow's bond should remain set at $5 million, saying she is a flight risk who left the state immediately after police started investigating the whereabouts of JJ and Tylee. He also noted that there are currently three active death investigations involving people linked to Lori - her estranged husband Charles Vallow, her brother Alex Cox, who shot Charles to death, and Chad Daybell's late wife Tammy, who was found dead just weeks before Chad and Lori remarried.

Neither Vallow nor Daybell has been charged in connection to those deaths. But a life insurance payout to Chad Daybell from his wife's death could easily fund a getaway attempt, Wood said.

Wood said that both Tylee and JJ received money from Social Security - benefits Vallow continued to collect even after flying to Hawaii without her kids.

The prosecutor also asked the judge to take into consideration the fact that Vallow had already once ignored a court order to physically produce her children to the Idaho Department of Health and Welfare or Rexburg Police within five days.

But a defense attorney for Lori Vallow urged the judge instead to drop the bond down to $50,000 or less, arguing that he should not be swayed by the publicity surrounding the case.

"The fact that she is presumed innocent is not a loose guideline," Edwina Elcox said. "This is not a court of public opinion, this is a court of law."

She accused prosecutors of shoehorning the case together after concluding they "just needed to find a charge that would fit in this case" amid media attention and public scrutiny.

Elcox rejected the idea that Vallow is a flight risk, telling the judge that even if Lori was released "she could not go anywhere without people and cameras scrutinizing her every move."

Judge Faren Eddins ultimately reduced the bond to $1 million, telling Vallow that if she is able to be released from jail, she will be required to remain in the area, wear a GPS monitor, and sign a waiver of extradition that would allow her to immediately be brought back to Madison County if taken into custody elsewhere.

Speaking outside the courthouse after the hearing, Colby Ryan said he does not know how to reconcile the woman in court with the caring mother he knew.

"My mom never abandoned us, never didn't take care of us, didn't do everything for us," he said. "I don't know how her mind works anymore. I used to be able to call her any time, talk to her anytime about anything. That's not the case anymore."

Ryan said the most important question now is what happened to his siblings - a sentiment echoed by Kay and Larry Woodcock.

The missing children are technically half-siblings, and the Woodcocks are not a direct relative of Tylee, but they say they would welcome both of them into their home if they are found.

"I guess all of y'all are aware of the fact of how much I love that little boy. He is my heart, he is my grandson," Larry Woodcock said. "Tylee is not my blood, but I love her just like she is mine."

Tylee was last seen during a Sept. 8 trip to Yellowstone with J.J., her mother, and Vallow's brother Alex Cox. The FBI has asked anyone with photos or videos that might show the group that day to come forward.

JJ was last seen at Kennedy Elementary Sept. 23. The next day, his mother informed the school he would not be returning.