The mother of missing Rexburg children J.J. Vallow and Tylee Ryan is now facing felony charges in connection to their disappearance. 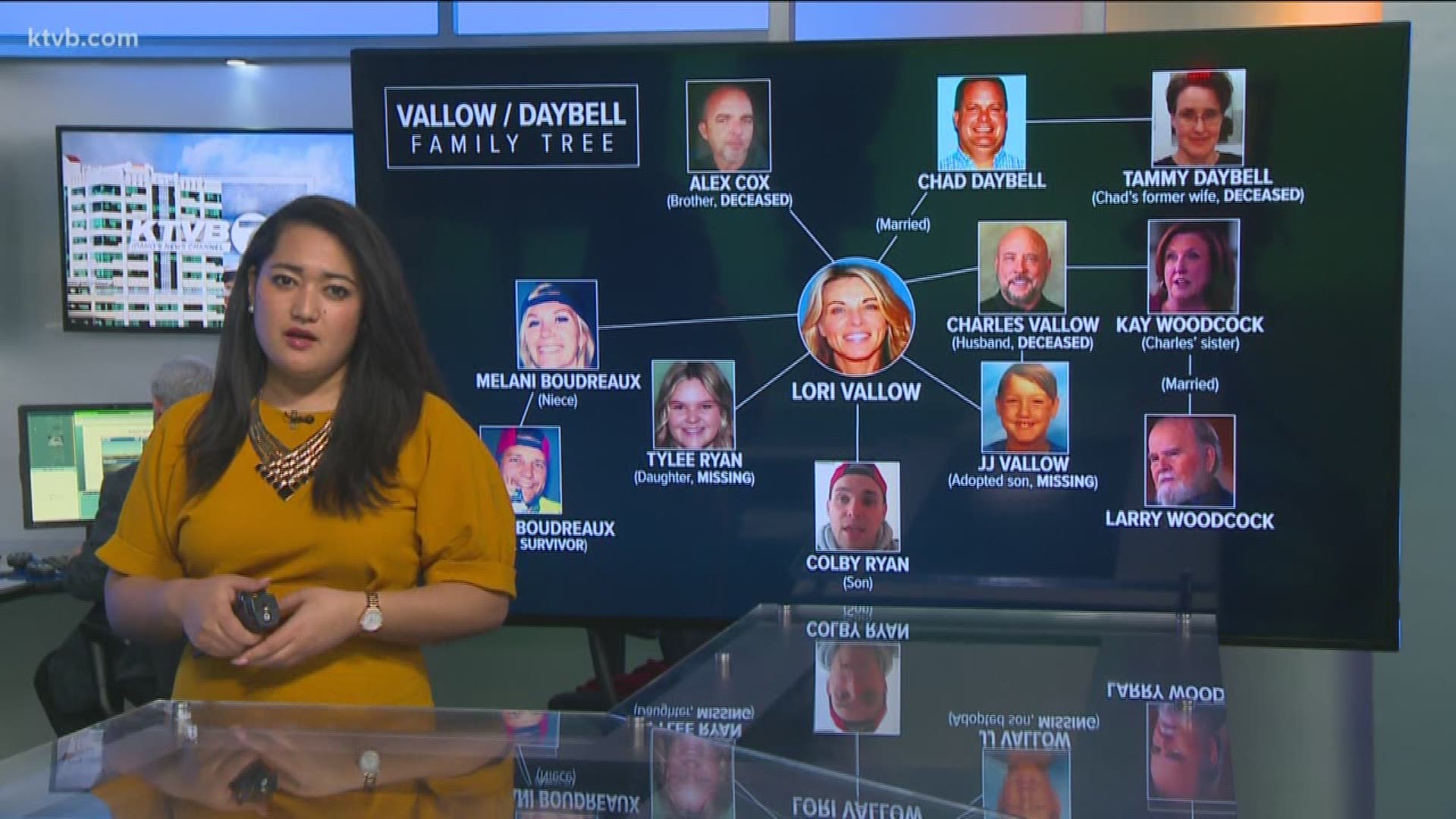 REXBURG, Idaho — Detectives investigating the disappearance of two children in Rexburg urged a judge to view their mother as "a flight risk" after her arrest on felony charges Thursday.

In a probable cause affidavit, filed two days before Lori Vallow was taken into custody, Rexburg Police Det. Ron Ball points to the woman's history of skipping town, lack of ties to Madison County and demonstrated "willingness to disobey and ignore a court order" in asking for a $5 million bond to be set in the case.

Police also raised concerns about the "significant financial resources" of Vallow and her new husband Chad Daybell, which investigators argued could help them evade justice.

"I am aware that Chad Daybell received at least $430,000 in life insurance proceeds upon the death of his wife Tammy," Ball wrote. "As such, Lori and Chad have resources sufficient to help them travel and hide from law enforcement and the Court."

Lori Vallow is accused of two felony counts of desertion and nonsupport of dependent children, as well as misdemeanors for resisting or obstructing officers, criminal solicitation to commit a crime, and contempt of court. Daybell has not been charged.

The arrest marks the first criminal charges in a bizarre case that drew nationwide attention after Lori Vallow's children, 17-year-old Tylee Ryan and 7-year-old Joshua "J.J." Vallow, quietly vanished in September after their move to Idaho.

According to court filings, both children were with Lori when they moved into a condo at 565 Pioneer Road in Rexburg on Sept. 1 or Sept. 2. Nearby residents reported seeing both children after the move-in.

Within weeks, that changed.

On September 8, Tylee and J.J. accompanied their mother and Lori's brother Alex Cox - who moved with the family, and lived in the same complex - on a trip to Yellowstone National Park. A photo from the park itself captured an image of Tylee outside the Yellowstone entrance. Another photo, obtained by police from Lori's iCloud account, shows the girl posing inside Yellowstone.

That photo was taken the same day they arrived, according to the timestamp.

"This photo is the last time we can find any record of [Tylee] being with Lori Vallow," the probable cause affidavit reads. "We have found no witnesses who can verify they have seen [Tylee] since September 8, 2019."

Neighbors didn't see the girl at the apartment after that, but J.J. was still there, according to police. A neighbor's doorbell camera captured video of him outside the condo Sept. 17, and a neighbor boy played with him multiple times during the first weeks of Septemeber.

But later that month, when that child went looking for J.J. to play again, Lori told him that the 7-year-old had gone to stay with his grandmother, according to police.

On Sept. 24, Lori Vallow told J.J.'s school that her son would no longer be attending.

More than 1,700 miles away in Louisiana, the children's grandparents were growing increasingly concerned that they could not get in contact with J.J. or Tylee, and ultimately asked police to check to make sure they were both alright.

Ball, the Rexburg detective, wrote that he went to Lori Vallow's condo on Nov. 26, and found both Lori's brother and Chad Daybell outside.

"Chad acted as if he didn't know Lori very well and stated he didn't know her phone number," Ball wrote. "Alex told the detectives that J.V. was with his grandma Kay Woodcock in Louisiana, which was not likely to be true due to the fact that Kay was the individual who first called in a missing child report."

Daybell later said he had last seen J.J. in the apartment in October, and admitted he knew Lori's number after all.

The same day, after police got in contact with Lori Vallow at her apartment, she told detectives J.J. was staying with her unrelated friend Melanie Gibb in Arizona, according to the affidavit. That woman did not answer the phone when officers called, prompting police to ask Lori to call her directly.

"At this time Lori told us that Melanie and J.V. were at the movie 'Frozen 2' so it was unlikely Melanie would answer the phone," Ball wrote.

That wasn't true, police learned later. Detectives in Gilbert, Arizona spoke with Gibb, who told them she had been asked to lie about where J.J. was, according to the affidavit.

"Both Chad Daybell and Lori Vallow called Melanie on November 26, 2019 at separate times and asked her to tell the police that she had J.V. even though J.V. was not with her," the affidavit says. "Melanie informed RPD that she declined Chad's and Lori's requests."

The next day, Rexburg Police served search warrants at the Pioneer Road condo complex. Lori Vallow and her new husband were gone.

"It appeared to me that most of the clothing in Lori's apartment had been removed. Other furniture was still inside the residence," Ball wrote. "RPD believed that she left Rexburg with Chad Daybell the night of November 26, 2019."

Lori Vallow's niece Melanie Boudreaux, who lived in the same complex, later confirmed to police that the couple had left town.

Inside Lori's condo, police found medication prescribed to J.J. to treat irritability associated with his autism. The prescription had been filled in January 2019 in Arizona, and had not been refilled in Idaho, according to police.

Officers also searched a storage unit Lori Vallow had rented, opening it to find kids' clothing, toys, bikes and a scooter, along with photo albums and blankets with photos of both Tylee and J.J.

Investigators later learned that Lori Vallow and Chad Daybell had gotten married on a beach in Hawaii Nov. 5, just weeks after the death of Daybell's former wife, Tammy Daybell. That death is now being investigated as suspicious, and autopsy results are pending.

Neither Tylee nor J.J. appears in the photos of Lori Vallow and Chad Daybell's wedding.

By Dec. 1, just days after leaving Rexburg in the middle of the night, the couple flew to Hawaii without the children, setting up residence on the island of Kauai.

When police ultimately caught up with them in January, according to the affidavits, there was no sign of J.J. or Tylee ever being in Hawaii or staying with the couple. A search of the rental car they were driving turned up both kids' birth certificates, J.J.'s  iPad, school registration receipts from Kennedy Elementary, and Tylee's financial card.

The card had been used since Tylee's last known sighting in early September, police say.

As the investigation continued, investigators also learned that Lori Vallow had gotten rid of her son's service dog just before the move to Idaho. The dog, named Bailey, had been trained by a company in Arizona and placed with J.J, to help him with his autism.

"On July 22nd she sent Dog Training Elite, AZ an email asking about finding another family for Bailey due to a change in life circumstances," the affidavit reads. "Dog Elite Training, AZ picked up the dog on August 30, 2019."

That email went out less than two weeks after the death of Lori Vallow's previous husband, Charles Vallow, who was shot to death by her brother Alex Cox. Alex Cox, who was interviewed by police about the missing children in late November, died at a home in Gilbert, Arizona on Dec. 12.

His cause of death has not been released.

Police say Chad Daybell and Lori Vallow did not tell those around them the truth about J.J. or Tylee either. Lori Vallow told a friend that Tylee was taking classes at BYU-Idaho, but the school has no record of her enrollment there. Daybell told his late wife's sister that Lori had no children, and Lori Vallow described herself to Daybell's parents in November as an "empty-nester."

Neither Tylee nor J.J. have a living father, police say, and neither has any other legal parent or guardian other than Lori Vallow. An examination of the suspect's banking records show she does not appear to be sending anyone any money to care for the kids.

"RPD has found no evidence or verification of anyone providing for the housing, food, clothing, education, or medical care of J.V. since September 24, 2019 and T.R. since September 8, 2019," the affidavit reads. "As of the date of this affidavit, J.V. and T.R. are still missing."

The felony charges, desertion and nonsupport of dependent children, are punishable by up to 14 years in prison. An extradition date for Lori Vallow has not yet been set.