In court, prosecutors played a jail call between Lori Vallow and Chad Daybell as investigators searched his property. 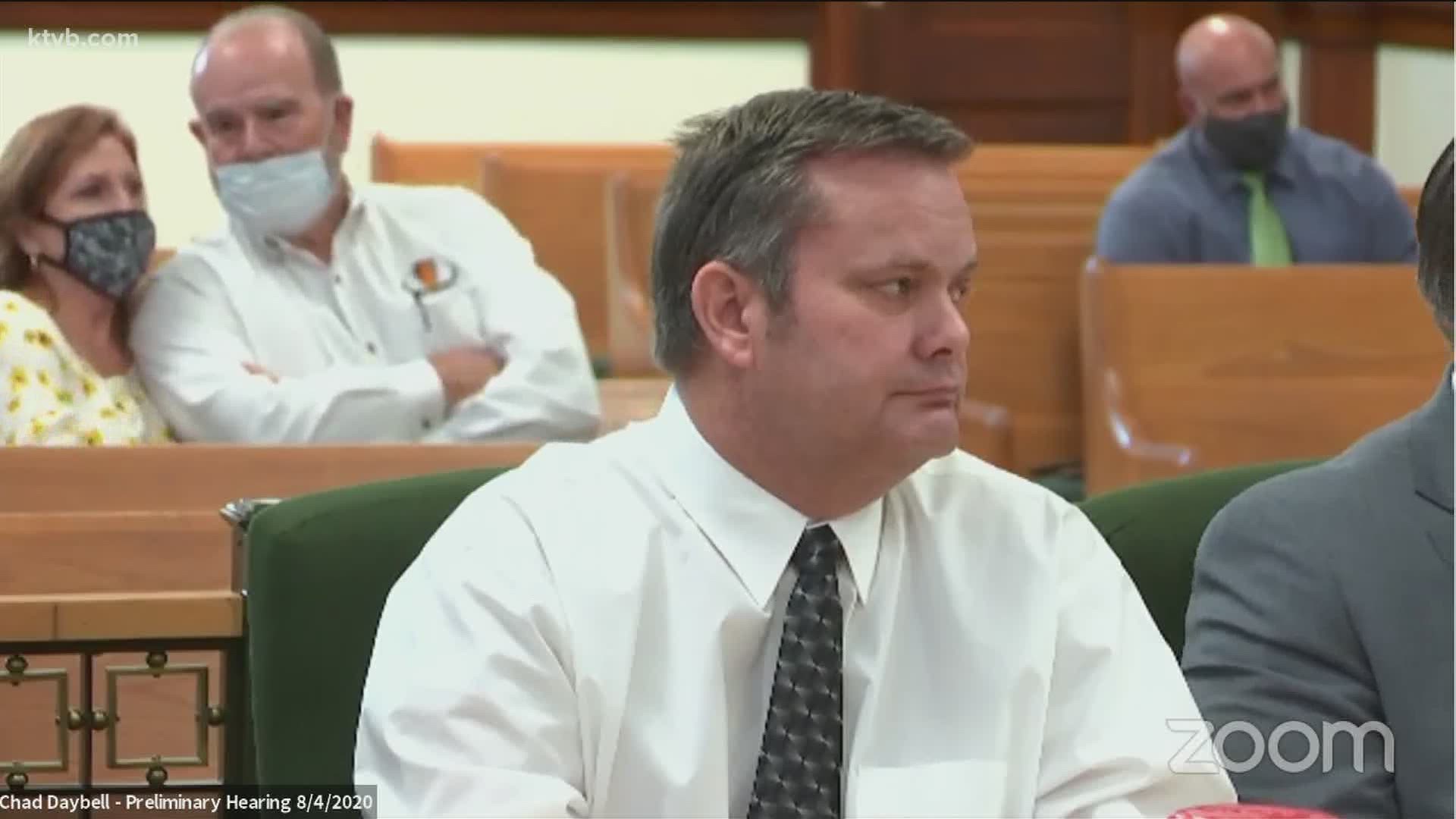 FREMONT COUNTY, Idaho — Note: This story includes graphic information that may not be suitable for all readers.

A Fremont County judge ruled Tuesday that there is enough evidence for the criminal case against Chad Daybell to move forward to trial after the final day of his preliminary hearing, which included testimony from an FBI agent and analysts assigned to the case.

Daybell was arrested and charged with two counts of concealment of evidence and two counts of conspiracy to conceal after the remains of two missing children were found buried on his property in June.

Lori Vallow, Daybell's wife and the mother of 7-year-old JJ Vallow and 16-year-old Tylee Ryan, is also charged with conspiracy to destroy, alter or conceal evidence.

The prosecution on Tuesday played an audio recording that Lori Vallow made from jail to Chad Daybell the morning of June 9, the day the children's bodies were found.

"Are you OK?" Lori Vallow asks in the recording

"They're searching the property... so Mark means will be talking to you." Chad Daybell responds.

Some of the audio in the call was significantly muffled and indistinct even to the judge, who said he would review it further to try and catch exactly what was said. Just before they end the call, Vallow asks what she can do to help.

The children's remains were found a short time later.

He said that JJ's remains were found near the pond under a tree in what he described as a "clandestine grave." The boy's body was wrapped in plastic and duct tape, the agent said.

Daniels said he cut through the black plastic, then a white trash bag underneath, and human hair began to fall out onto his hands.

"That was the point at which we determined this was human remains," he testified.

Tylee's body, which was unearthed in the pet cemetery, was found later that same day.

Searchers found the remains of a dog and a cat before uncovering what appeared to be two vertebrae while digging with a backhoe.

Daniels testified that he could smell the odor of decomposition at that point. The excavation further revealed a human bone sticking out of a mass of flesh, he said.

The evidence team paused for the night, then continued excavating that grave the next day.

Daniels said as investigators continued to remove layers of dirt, it became clear that the teen's body had been cut into pieces and set on fire.

"Burial site #2 was a little more complex for us, I think," he said. "It was kind of a mass of dismembered human remains - burnt, partially burnt. So we did the best we could. It was kind of hard to recognize what are we looking at here, initially."

Beneath the "mass," he said, law enforcement found a melted green bucket, Tylee's skull, and her jawbone with teeth attached.

Prosecutors say the 16-year-old was killed in early September: Tylee was last seen alive in a photograph taken at Yellowstone National Park on Sept. 8. The next day, the phone of Lori Vallow's brother Alex Cox pinged on the property of Chad Daybell, where her body would eventually be found.

Less than 15 minutes after Cox's phone data showed he was no longer on the property, Chad Daybell sent a text message to his then-wife, Tammy Daybell.

"Well, I've had an interesting morning! I felt I should burn all of the limb debris by the fire pit before it got too soaked by the coming storms. While I did so, I spotted a big raccoon along the fence," the text message reads. "I hurried and got my gun, and he was still walking along. I got close enough that one shot did the trick. He is now in our pet cemetery. Fun times!”

Benjamin Dean, an intelligence analyst for the FBI who analyzed Tammy Daybell's phone, said that message stuck out to him because it was longer than many of the other texts Chad Daybell sent his wife. In addition, he said, it provided an explanation from Chad Daybell about why there would have been a fire and a gunshot that morning.

"So upon reading this text message in which Chad appears to claim to have started a fire, shot and killed a large animal and buried it on his property - I recognized that it was sent the day after Tylee Ryan was last seen alive, and I became concerned," Dean said.

Tammy Daybell died the next month. Her death has been ruled "suspicious."

JJ Vallow was last seen the night of Sept. 22, as the couples' friend Melanie Gibb and her boyfriend David Warwick visited them in Rexburg. Both Gibb and Warwick testified that they saw Alex Cox carry in the sleeping boy late that night, but when they got up the next morning, he was gone.

Warwick testified Tuesday morning that Lori Vallow explained that JJ had been "out of control," so she had Alex Cox come and get him.

"She said that he was being a zombie - he climbed up on the cabinets, climbed up on top of the fridge and smashed her picture of Christ down," Warwick said.

Although Prosecutor Rob Wood referred to both children as "victims of homicide," neither Lori Vallow nor Chad Daybell is charged with killing them, and officials have not released how they died. Alex Cox died in December before any arrests were made in the case.

Wood urged the judge to move the case forward to district court, saying that there was more than enough evidence that Daybell had tried to thwart the police investigation and make sure no one found the children's remains.

"Those bodies were concealed. One of them was destroyed. They were located on Chad Daybell's property," the prosecutor said. "Alex Cox, whose phone pinged near those locations, became his brother-in-law less than two months later."

But John Prior, Chad Daybell's defense attorney, argued that the prosecution did not have enough evidence and that the felony charges should be dropped outright.

Judge Faren Edddins ultimately sided with the prosecution, ordering that Daybell's case be moved forward to district court for trial. As the hearing ended, JJ's grandfather Larry Woodcock leaned back in his seat in the gallery, raising both hands into the air.

Chad Daybell's next court hearing is set for Aug. 21.