“It is suspicious and it draws various questions that we would need to ask Lori and Tylee and possibly Chad to get to the bottom of it." 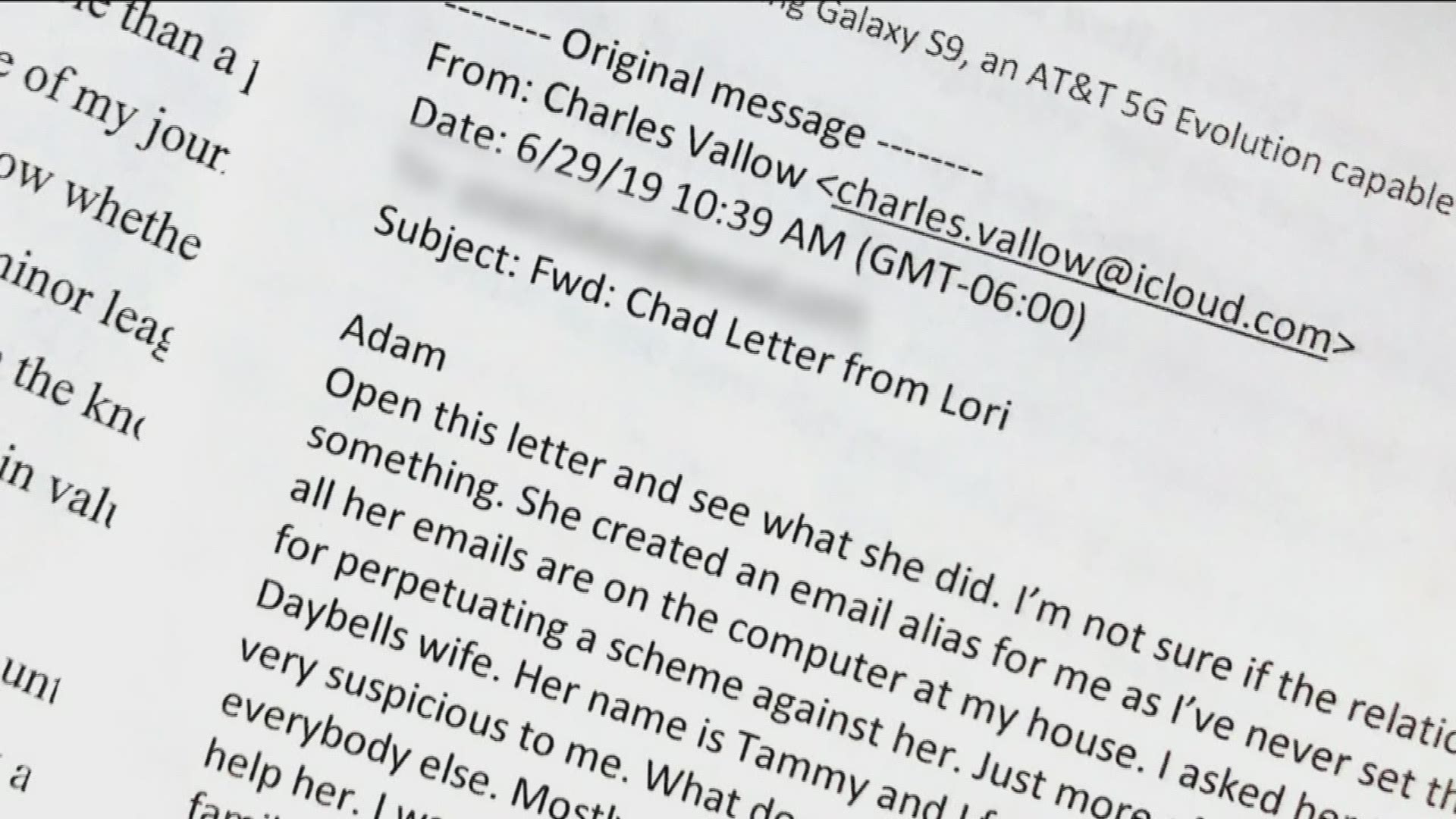 Officers with the Chandler Police Department confirmed they are investigating a letter allegedly sent from Lori Vallow to Chad Daybell shortly before her former husband’s death.

Arizona police said they’re searching the email for a link to Vallow’s death, which could provide clues in the disappearance of 7-year-old JJ Vallow and 17-year-old Tylee Ryan. Vallow is JJ Vallow’s adoptive father and Ryan’s stepfather.

It was shortly after JJ Vallow and Ryan went missing that their mother, 46-year-old Lori Vallow married 51-year-old Chad Daybell.

Both of their spouses had also died recently under suspicious circumstances.

In a Sept. 2015 post on Daybell’s website, he described what could be considered a happy marriage to 49-year-old Tammy Daybell, focused on the couple’s faith. Pictures showed Chad and Tammy Daybell on their first wedding anniversary, while others featured a smiling, expecting Tammy Daybell and Chad Daybell with one of his children.

They were married for 28 years before Tammy Daybell unexpectedly died on Oct. 19, 2019, in Salem, Idaho.

An obituary stated Daybell passed away peacefully in her sleep and she was buried three days later in Springville, Utah.

Eleven days after that, Chad Daybell remarried Lori Vallow on Nov. 5 in Hawaii.

Vallow’s own estranged husband, Charles Vallow, had recently died on July 11. Charles Vallow had stopped by to pick up JJ Vallow at the Arizona home where Lori Vallow was living with the kids. Police said a confrontation ensued and Charles Vallow was shot and killed by Lori’s older brother, Alex Cox. Cox claimed he fired in self-defense.

Cox died on Dec. 12 under suspicious circumstances in Gilbert, Arizona. Police there are currently investigating his death.

Meanwhile, officers with the Chandler Police Department are over the investigation into Charles Vallow’s death. Police confirmed they are looking into the email obtained by KSL TV, which Vallow allegedly sent on June 29  to his other brother-in-law, Adam Cox.

Detectives declined to provide further specifics about the email as it is part of their ongoing investigation but did say they consider the letter “suspicious.” Police received the letter shortly after Charles Vallow’s death.

“It is suspicious and it draws various questions that we would need to ask Lori and Tylee and possibly Chad to get to the bottom of it,” said Sergeant Jason McClimans with the Chandler Police Department in a phone interview.

In his message to Adam Cox, Charles Vallow claimed Lori Vallow created an email alias for him and used it to send a message to Chad Daybell the day before, inviting him to visit Arizona and write a book.

Charles Vallow suspected his wife wrote the letter, pretending to be him.

Excerpts from the message said in part: “I would gladly fly you down here early next week…you could stay in our guest room like before. I hate to take you away from your family, but I would definitely make it worth your time. With Admiration, Charles.”

Charles Vallow expressed concern about that message to Adam Cox, saying, “I’m not sure of the relationship with her and Chad Daybell but they are up to something…She will not explain it…I am going to send it to Chad Daybell’s wife. Her name is Tammy and I found her email address on their website too…I’ve got her cell number too.”

Chandler police said they are also working closely with the other agencies over the other cases tied to the missing children including the Fremont County, Idaho, Sheriff’s Office, which is over Tammy Daybell’s suspicious death investigation; the Gilbert, Arizona, Police Department, which is investigating Alex Cox’s death; and the Rexburg, Idaho, Police Department and FBI, which are directly over the disappearance of Ryan and JJ Vallow.

MORE: Lori Vallow's niece denies claims she knows where JJ and Tylee are

RELATED: How and when will Lori Vallow, mother of two missing Rexburg kids, return to Idaho?

“I most likely think they will try to interview her again. We would love to sit down and talk to Lori,” McClimans said.

It was unclear if Charles Vallow ever contacted Tammy Daybell about the letter.

Chad Daybell has not been charged in any of the investigations as of Saturday.

Read the latest on the disappearance of J.J. Vallow and Tylee Ryan: