Forty-year-old Sara Brady asked to make sure her arrest was being recorded and said: "someone call Idaho Freedom Foundation right now and get them on the phone." 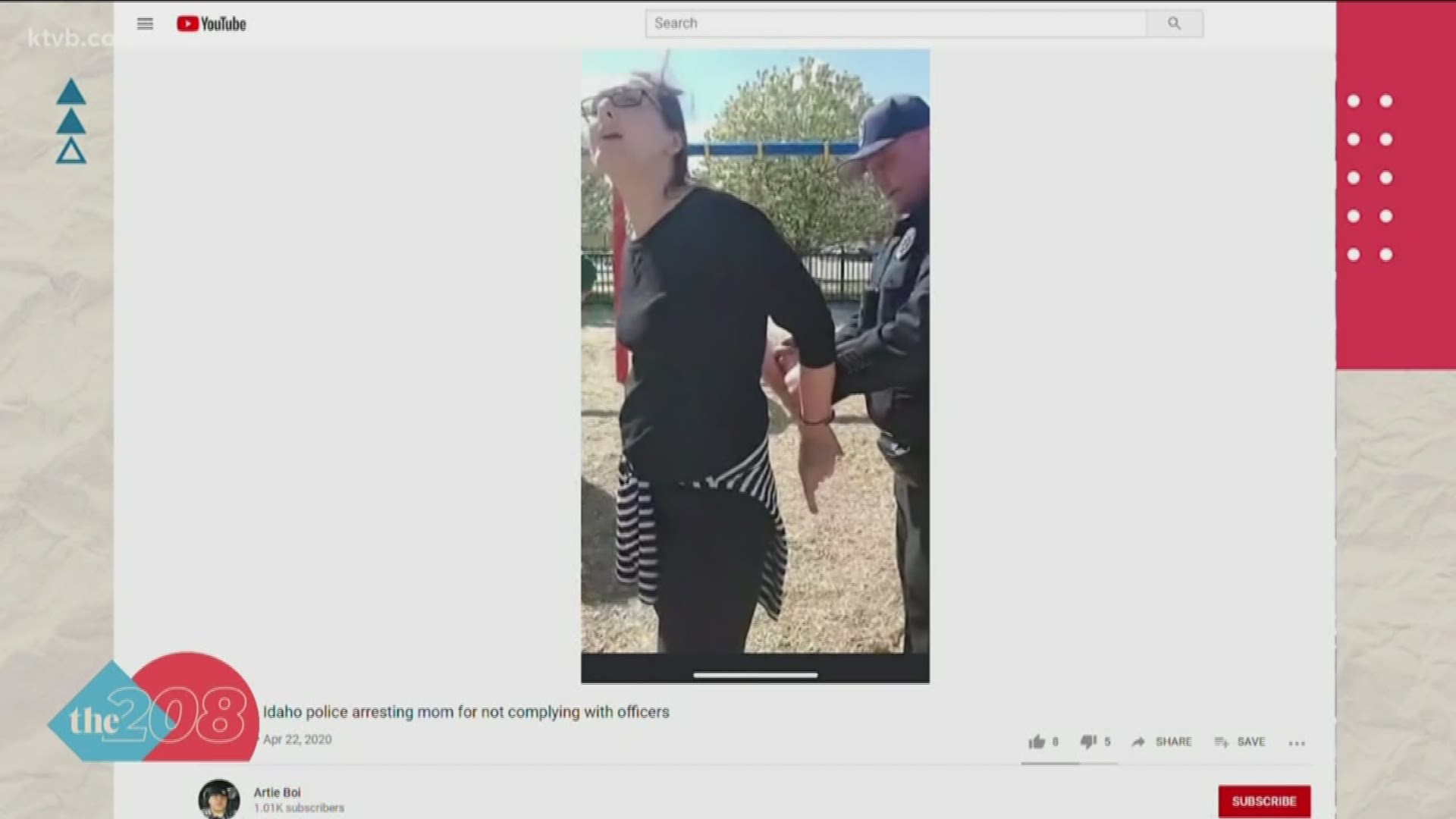 BOISE, Idaho — A 40-year-old Meridian woman was arrested on Tuesday after she and a large group of people went to a closed playground, refused to leave and Brady told an officer to arrest her. Brady's arrest quickly sparked another protest at Meridian City Hall.

Sara Brady was charged with misdemeanor trespassing and booked into the Ada County Jail at about 5 p.m. Tuesday. She has since been bailed out.

The arrested was captured on video during a Facebook live and has made its way around social media, with one of the videos getting over 15,000 reactions and 13,000 shares.

(Edit: The videos posted to Facebook appear to have been taken down or made private)

In this video posted to YouTube, Brady and a large group of parents and children are seen at the playground at Kleiner Park in Meridian, with police tape that signaled the park was closed to the public due to the coronavirus pandemic visible on the ground.

The City of Meridian closed their playgrounds down last month in order to lessen the spread of COVID-19, which can live on plastics, like a playground slide, for days.

Several Meridian police officers are seen in the video repeatedly asking the group to leave the playground, which the group refused to do.

Brady, who was followed throughout the Facebook live, repeatedly asked one officer why they couldn't be there. The officer explained to the group that the city had closed down the playgrounds but they could play in the open grass areas or on the sidewalks.

Sher Ann
Boise peaceful friends has 867 members. This group exists sadly because of the need for us to fight for our rights and liberties. Please only post things...

Prior to Brady's arrest, the arresting officer is shown in the video saying "Ma'am, I've told you to exit numerous times, this is it. Exit the playground area now. I'm really trying to be nice about this."

The officer gives Brady one last warning, giving her to the count of five to leave. After he counted down to three, Brady is heard saying "Arrest me for being difficult. Do it! Record it!" Then she asked several times if she was being arrested or detained, which the officer said she was being detained.

As she was being handcuffed, Brady sternly said, while pointing to the ground, "Someone call Idaho Freedom Foundation right now and get them on the phone."

Credit: Ada County Jail
Sara Brady of Meridian was arrested on Tuesday afternoon after refusing to leave a closed playground.

The Idaho Freedom Foundation said it was part of a planned protest. They have an ongoing list of places that will hold protests against the stay at home order.

During the confrontation leading up to Brady's arrest, an unnamed city employee asked Brady and the woman filming it, "Were you guys organized to do this? So all of you just showed up at once?"

Meridian Police said in a statement that Brady was being noncompliant and forced them to arrest her.

RELATED: Have inalienable rights been taken away from Idahoans due to COVID-19 crisis mitigation efforts?

The video goes on for nearly 40 more minutes, showing the large crowd of people shouting at police officers, asking them various questions about the legality of Brady's arrest.

1 / 6
KTVB
A group of roughly 100 protesters gathered at Meridian City Hall on Tuesday, April 21, after Meridian Police arrested and charged a woman who refused to leave a playground that was closed to prevent the spread of COVID-19.

Brady's arrest is another chapter in the growing battle between state governments across the county and conservative groups. As governors shut down non-essential businesses to lessen the spread of the deadly coronavirus, which has killed over 46,000 people in the U.S. at the time of this article's publication. Protestors say the closures and stay at home orders are unconstitutional and infringe on civil liberties.

However, the stay at home order and the closure of all non-essential businesses are legal under Idaho's constitution. Idaho Attorney General Lawrence Wasden announced in early April that Idaho law gives the governor the power to restrict the movement of people and goods during a state of emergency, which Idaho is currently under.