After 20 years in prison, an Idaho Falls man convicted of rape and murder is a free man. 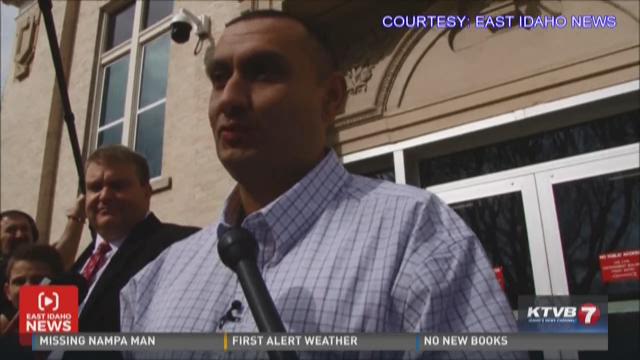 After 20 years in prison, an Idaho Falls man convicted of rape and murder is a free man.

Christopher Tapp walked out of the Bonneville County Courthouse this morning after his attorneys reached a deal with the state.

Tapp spent half his life behind bars for the 1996 murder and rape of 18-year-old Angie Dodge.

Today, a judge vacated Tapp's rape conviction and resentenced him for time served for the murder.

Twenty years in prison is a long time, and Tapp says he's thankful for all the support people gave him and now he wants to prove to them that he's worth something.

"Twenty years ago I was broken, drug addict and everything else underneath the sun,” Tapp said. “Twenty years from that, now I have to prove that I was worth something, that I can do something right."

He served 20 years after confessing and being convicted of the 1996 rape and murder of Angie Dodge in her Idaho Falls apartment.

This is not an exoneration. It's part of plea deal Tapp's attorneys and the state agreed on.

"Today's hearing finalized the question of Christopher's Tapp's guilt, which had been proven beyond a reasonable doubt to the satisfaction of jury of his peers in 1998. Today's hearing also considered the questions that have been raised through the post-conviction process, and balanced the evidence against equitable concerns regarding the length of the defendant's sentence. From the state's perspective, justice has been served in regards to Christopher Tapp."

People have questioned Tapp's guilt for years. Different advocacy groups have worked to prove his innocence saying there's no DNA evidence that connects Tapp to the crime. Others claim he was coerced into giving a false confession.

Even the victim's mother, Carol Dodge, asked for Tapp's release.

Tapp said he was filled with gratitude toward Dodge.

"Thankfulness that she spent all of time, effort and energy to help me get to this point,” Tapp said. “To continue to believe in my innocence and to be there for me."

Tapp says he never thought he'd see this day come. Now that it's here and he's free, he says going to get a job, spend time with family, and enjoy the things he hasn't enjoyed in 20 years.