The Capitol was vandalized Wednesday night following the latest round of protests in Boise. 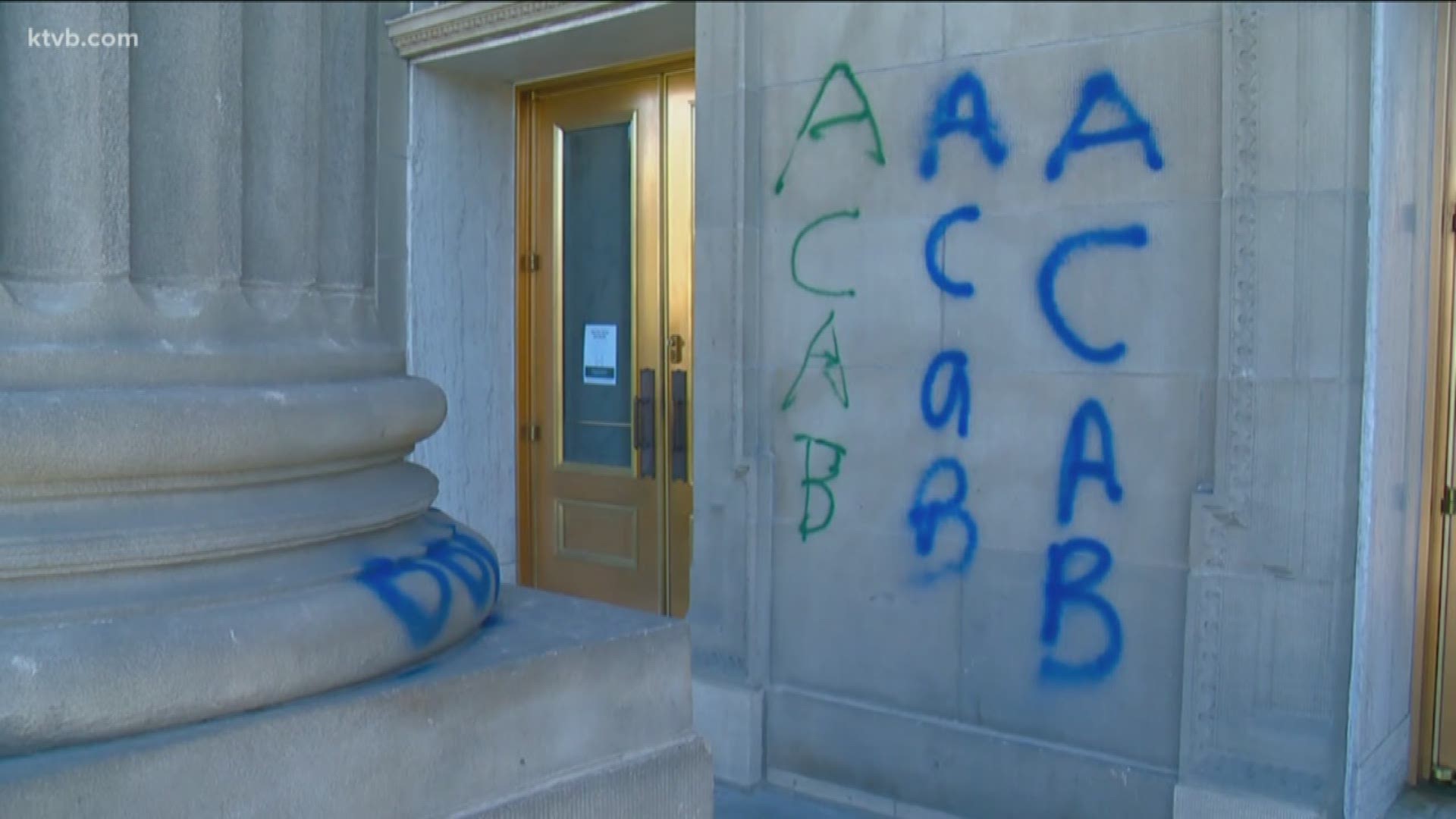 BOISE, Idaho — An 18-year-old woman is in custody after police say she vandalized the Idaho Capitol building during a protest in Boise Wednesday evening.

Deisy Shannon Heatherly of Boise is charged with felony malicious injury to property.

Capitol Mall Security was alerted to the graffiti by a citizen at about 7 p.m., just as the first demonstrators were beginning to arrive at the Statehouse. ISP and Boise Police began investigating and found evidence that led them to Heatherly.

The suspect was still near the Capitol building, and was arrested and booked into the Ada County Jail without incident. The charge is a felony because the graffiti is estimated to have caused more than $1,000 in damage to the building.

The damage did not occur during Tuesday night's black lives vigil, KTVB talked to one of the vigil's co-organizers about it.

"We as organizers of the vigil have no role in anything that’s happened since, organizer Jessie Levin said.

She told KTVB the girl who was arrested isn't a supporter of the Black Lives Matter movement, and said spray painting wasn't an effective way of spreading their message.

"I just don’t think its that constructive, and I just have their souls in my thoughts," she said.

Instead, she wants people to affect peaceful change and meaningful action.

"We really just want people to dig deep, have those hard conversations and have that self-work to affect meaningful and peaceful change," she said.

Two teens under the age of 18 were with Heatherly when she tagged the building, ISP said, and they may also face criminal charges.

"The Idaho Capitol building is a symbol of hope and resolve to all Idahoans and a backdrop for dozens of peaceful protests each year," ISP Capt. Matthew Sly said in a press release. "The voices of peaceful protesters cannot be overshadowed by the criminal acts of the very few. Yet those who intentionally do damage to the house owned by all the people of Idaho will be called to account for their actions."

Graffiti on the Idaho Statehouse in Boise

Felony injury to property is punishable by up to five years in prison.

In a separate incident at the protest, ISP arrested 18-year-old Madison Lee Allen of Boise after seeing her take a flag out of the hands of another protestor. Allen is charged with misdemeanor counts of theft, marijuana possession, possession of paraphernalia, and resisting and obstructing.

ISP says the arrests did not disrupt the protest, during which a group gathered on the steps and marched downtown in protest of the death of George Floyd, who was killed by a police officer in Minneapolis last week.

Several thousand people gathered at the Statehouse Tuesday evening for the vigil honoring Floyd. Although tensions have flared at the Boise demonstrations, they have all remained relatively peaceful, police say, with the exception of an 18-year-old arrested for firing a gun into the ground at one of the protests earlier this week.

"Idahoans have a long history of peaceful assembly at our State Capitol and our Troopers have protected tens of thousands of protesters over the years allowing their voices to be heard," said ISP Col. Ked Wills. "It's the Idaho way to treat others with respect and enact change through cooperation. We appreciate those who are showing that respect to their fellow protesters, the community, and to the Troopers and Officers tasked with protecting them."