Surveillance videos inside the U.S. Capitol on Jan. 6 show the brothers in the hallway outside the Speaker of the House’s offices, according to the document. 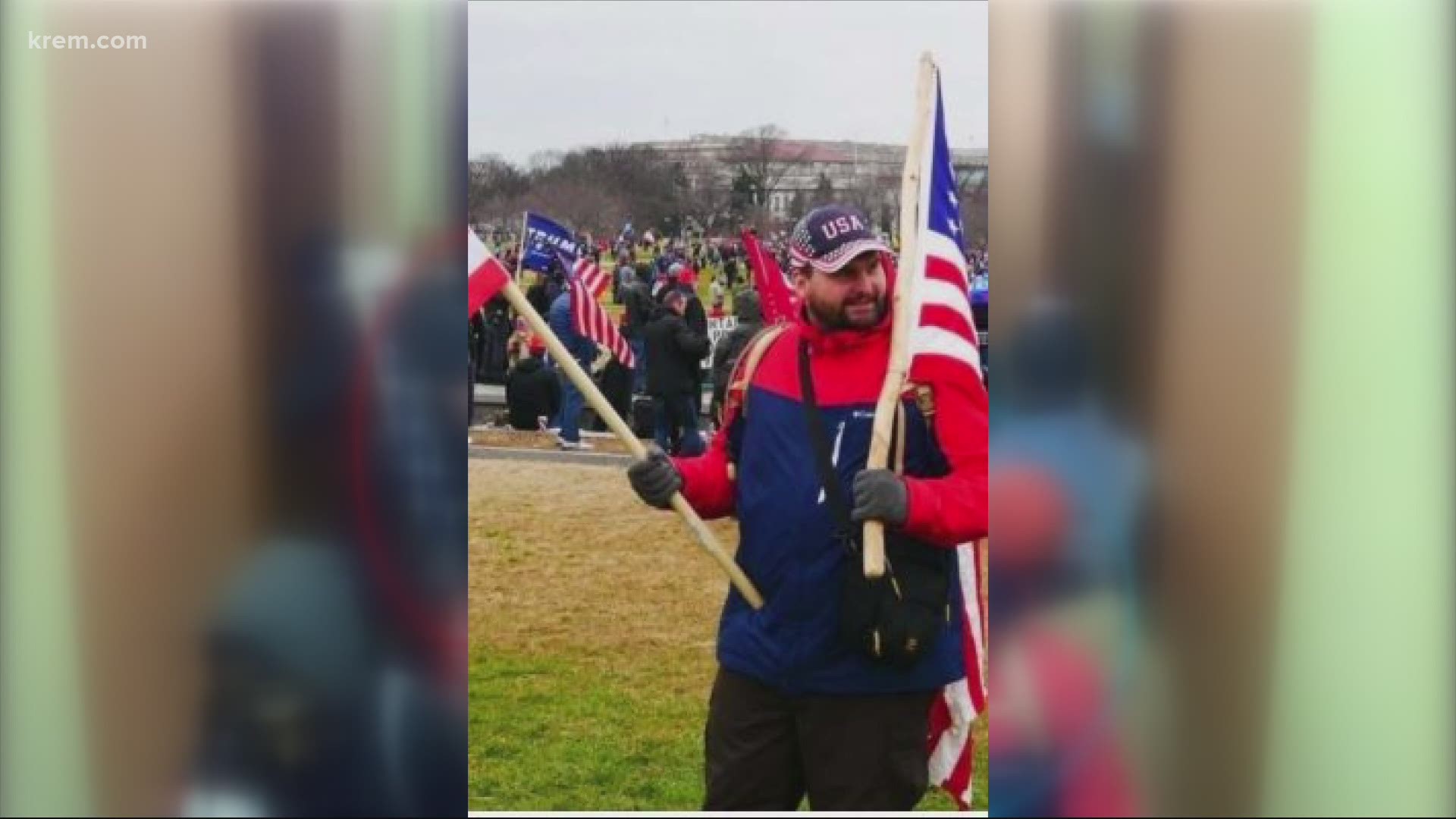 SANDPOINT, Idaho — A statement of facts surrounding the arrest of a Sandpoint man connected to the Capitol riot on Jan. 6 has been unsealed by a federal court in Washington, D.C., as reported by KREM 2 News partner the Bonner County Daily Bee.

The 10-page document details Michael Anthony Pope's travel to and from the Idaho panhandle to the nation's capital as well as that of his brother, William Pope of Kansas. The document includes a breakdown of the pair's activities "during the criminal activity in and around the Capitol grounds" as well as photos of the pair both outside and inside the building.

The brothers were among the thousands of supporters of former President Donald Trump who converged on the Capitol as Congress met in a joint session to certify the Electoral College votes for the 2020 Presidential Election. To date, several hundred people have been charged in connection to the insurrection.

RELATED: Sandpoint man accused of participating in Capitol riots to be released from custody

After detailing the events, the court document said that on Jan. 8, a witness provided the FBI with a Facebook Live video taken during the insurrection by William Pope.

Screenshots from the video show Michael Pope carrying an American flag and wearing a distinctive green backpack with a light-colored stripe in the center.

Credit: The Bonner County Daily Bee
FBI documents say witness identified William Pope, pictured circled in blue in a screenshot taken from inside the U.S. Capitol building outside the Speaker of the House’s office. Also depicted in the photograph, marked with a red circle, is Michel Pope, wearing the same clothing as depicted in the video in which William Pope identifies him as his brother, according to a document unsealed by a federal court in Washington, D.C., on Thursday.

A second witness provided FBI agents with a screenshot of an MSNBC news broadcast showing William Pope in Statuary Hall in the U.S. Capitol building during the riot. Both witnesses identified the Kansas man as being inside the building. An online article in the Kansas Reflector also identified Pope and included a screenshot of the man being restrained by a U.S. Capitol Police officer.

In the article, William Pope is said to have texted a message that said, "I’ve reported myself to the FBI and remain loyal to the United States of America.” The agent testified that the text appeared to be a reference to a message William Pope left on the FBI internet tip system set up to report criminal activity connected to the Jan. 6 riot.

“I would like to turn myself in," William Pope said in the message left on on Jan. 12. "I was in the Capitol on January 6. I did not damage any property or engage in any violence. I am loyal to the United States and was only there to exercise my freedom of speech. I left the building voluntarily.”

On Jan. 12, an Idaho FBI agent received information that Michael Pope lived in North Idaho and photographs from open source searches appeared consistent with the man identified by William Pope as his brother.

On Jan. 21, William Pope provided a voluntary, non-custodial interview to the FBI during which, the document states, he admitted to entering the U.S. Capitol building with his brother, Michael Pope.

"William Pope stated that he and Michael Pope stayed within several feet of each other all day on January 6, 2021, for their own safety and so they didn’t get separated in the crowd," according to the document. "William Pope stated that he posted the video from his cellular phone to social media while marching to the U.S. Capitol building. This is the same video that depicts his brother, Michael Pope, marching with him."

While he had rented a car and driven to Washington, D.C., from Topeka, Kansas, Pope said his brother flew in from Idaho and that the pair planned the trip together and were going to make a vacation of the trip and camp at several parks along the coast before Michael Pope flew back home.

However, "after seeing the gravity" of the situation, the pair changed their plans and Michael Pope eventually flew to Spokane from Pittsburgh, Pennsylvania, after unsuccessfully attempting to rent a car to drive back to Idaho.

The Idaho FBI agent reviewed film from cameras containing license plate readers in the Coeur d'Alene area to search for two vehicles associated with Michael Pope during the applicable timeframe. A hit on one of the vehicles is consistent with someone driving the Sandpoint man to the airport in Spokane, the agent noted in the document.

On Jan. 22, the US Capitol Police officer seen in the photo in the Kansas online article was interviewed and told agents he remembered William Pope due to "his large size and passive resistance" to his efforts to keep him from entering the U.S. Capitol.

Surveillance videos inside the U.S. Capitol on Jan. 6 show the brothers in the hallway outside the Speaker of the House’s offices. "In the video, William Pope appears to strike one of the office doors several times with the bottom of his flag pole and then attempts to force the door open by lunging into the door with his shoulder," the agent said in the document.

Additional surveillance video in the U.S. Capitol shows both brothers in different locations throughout the building. In particular, one of the videos timestamped at 2 p.m. shows Michael Pope entering an elevator near the Senate carriage door with his brother following him. A police officer notices Michael Pope in the elevator and appears to motion to him to exit.

A third surveillance video timestamped 20 minutes later shows the pair coming down the stairs and exiting the camera's viewpoint.

The Bonner County Daily Bee is a KREM 2 news partner. For more from our news partner, click here.