The July crash left the cyclist hospitalized with a badly fractured ankle. 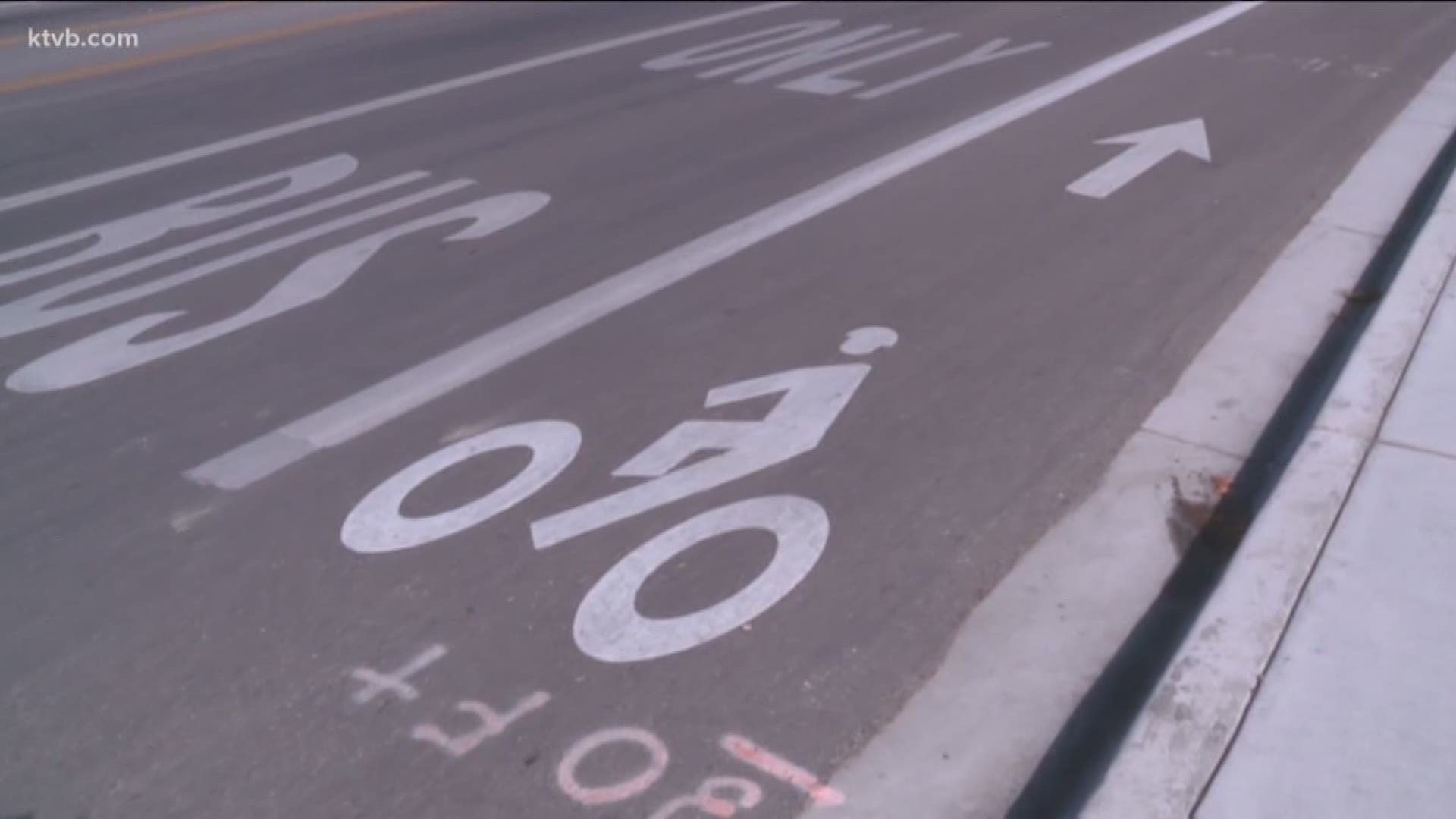 BOISE, Idaho — After about 90 minutes of trial, an Ada County magistrate judge on Thursday found a Boise cyclist guilty of causing the July car crash that left her hospitalized with a badly fractured ankle. Her attorney said he’d never seen a similar case in his 25 years of experience.

Nobody involved in the case disputed Elizabeth Hilton, 43, was struck by a car the morning of July 19 in the area of the three-way intersection of Emerald Street, Latah Street and Americana Boulevard. Boise city prosecutors, however, successfully argued she disobeyed the traffic lights at the intersection and rode through it when it wasn’t safe. Magistrate Judge Theodore Tollefson found her guilty of failing to obey a traffic control device, and ordered her to pay a $90 fine.

In Idaho, cyclists can treat a red light similar to a stop sign. They must stop, but are allowed to ride through an intersection against a red light so long as it is safe to do so. The onus falls on the cyclist to make that determination, however. While Josh Bishop, the case’s prosecutor, acknowledged Hilton, coming to the light from Emerald Street, stopped at the red light before proceeding, he argued she failed to see it was unsafe to move forward.

“In this case Ms. Hilton has the obligation … to make sure the intersection is clear if she’s going to be on a bike, otherwise she’s not obeying the traffic signal,” Bishop said in his closing argument.

On the stand, however, Hilton, who said she passed through the intersection about 50 times a week on average, testified she checked to make sure the intersection was safe before she moved forward against the red light.

“I stopped at the light. I waited for oncoming traffic to turn,” Hilton said. “I then looked right — there was plenty of time for me to clear the intersection before any cars … would have come to the light, regardless of the color of the light.”

David McDaniel was also approaching the intersection that morning, driving north on Latah Street from a friend’s house. That section of Latah Street was modified recently. An island once existed there, creating a separate lane for vehicle traffic to merge onto Americana Boulevard. That island has since been removed.

Just as he got to the intersection, he said, the light turned green. He said he checked to make sure the intersection was clear, then made a turn onto Americana Boulevard.

One of the case’s key controversies hinged on what happened next. McDaniel said he didn’t see Hilton, and struck her while he was well into his turn, but still in the intersection. Bishop argued that was true, and thus Hilton should not have been in the intersection in the first place.

Hilton, however, said she cleared the intersection, and said McDaniel struck her bike from behind, while she was in the bike lane. She said the car hit her back tire, spun her bike around, and that she landed on her left leg. If that is indeed what happened, Hilton would not be guilty of failing to obey a traffic signal, because she was beyond the signal when the crash occurred.

RELATED: SUV runs over Boise cyclist then speeds off, leaving a trail of damage and medical bills

Regardless, witnesses agreed Hilton was carried by McDaniel’s car after he struck her. She landed roughly 30 feet from the intersection, Kurt Holzer, Hilton’s attorney, said. Hilton said she landed on her left leg, which, according to a GoFundMe campaign set up to help pay for her medical bills, caused a pilon fracture and would require multiple surgeries to fix. Holzer confirmed Friday that Hilton is still using crutches.

Bishop pointed out there were marks on McDaniel’s car consistent with his hitting her broadside. Holzer reminded the judge there was a tire scuff mark on the car’s front bumper, indicating he’d hit her from behind. Hilton herself said she was struck from behind initially, then the car spun her bike and carried her.

The only other person in court who saw the crash, and who testified, was Jim Kemmsies, who was stopped on Emerald Street when the crash occurred. He testified the crash played out in the intersection, and he pulled over to help Hilton after the crash.

In his closing argument though, Holzer questioned Kemmsies’ ability to see what happened during the crash, given his location on Emerald Street, and the fact that the intersection is angled.

“It’s frankly impossible for him to see what’s in front of (McDaniel’s) car,” Holzer said.

Holzer also questioned the statute the prosecutor chose in the case. Hilton was charged with violating Idaho Code 49-801, which reads, “The driver of any vehicle shall obey the instructions of any traffic-control device placed or held in accordance with the provisions of this title.”

Holzer argued the legislature created an exception for cyclists though, and he pointed to Idaho Code 49-720.

“A person operating a bicycle or human-powered vehicle approaching a steady red traffic control light shall stop before entering the intersection and shall yield to all other traffic,” section 2 of that code reads. “Once the person has yielded, he may proceed through the steady red light with caution.”

Bishop argued Hilton’s bicycle classified as a vehicle, which was why the office chose to use the statute it did, instead of the one Holzer mentioned. He also argued she hadn’t yielded correctly.

“She clearly didn’t yield, because according to two witnesses, she was struck in what those witnesses described as their definition of an intersection,” Bishop said, later adding, “If he didn’t see her, that is an unfortunate accident, but it does not relieve her of her liability or obligation to check that intersection to make sure it’s free of all hazards.”

“There is a series of statutes that say that a bicyclist essentially is a vehicle and they are obligated to follow the rules of the road,” Bishop said in his closing argument. “There is an exception, if they want to try to clear a light when red, that they wouldn’t be running a red light; however, she didn’t do that, so she still would be liable under 49-801. Based on the very consistent testimony that you heard here today, Your Honor, the state would ask that you find her guilty.”

Holzer told KTVB reporter Chase Biefeldt on Monday he plans to appeal if the court does not reverse the decision.