'I know sorry is not enough': Man sentenced to 30 years in prison for Spokane murder of Makayla Young

Makayla Young said she was afraid Anthony Fuerte would kill her because "he believed she had set him up to be arrested," according to court records. 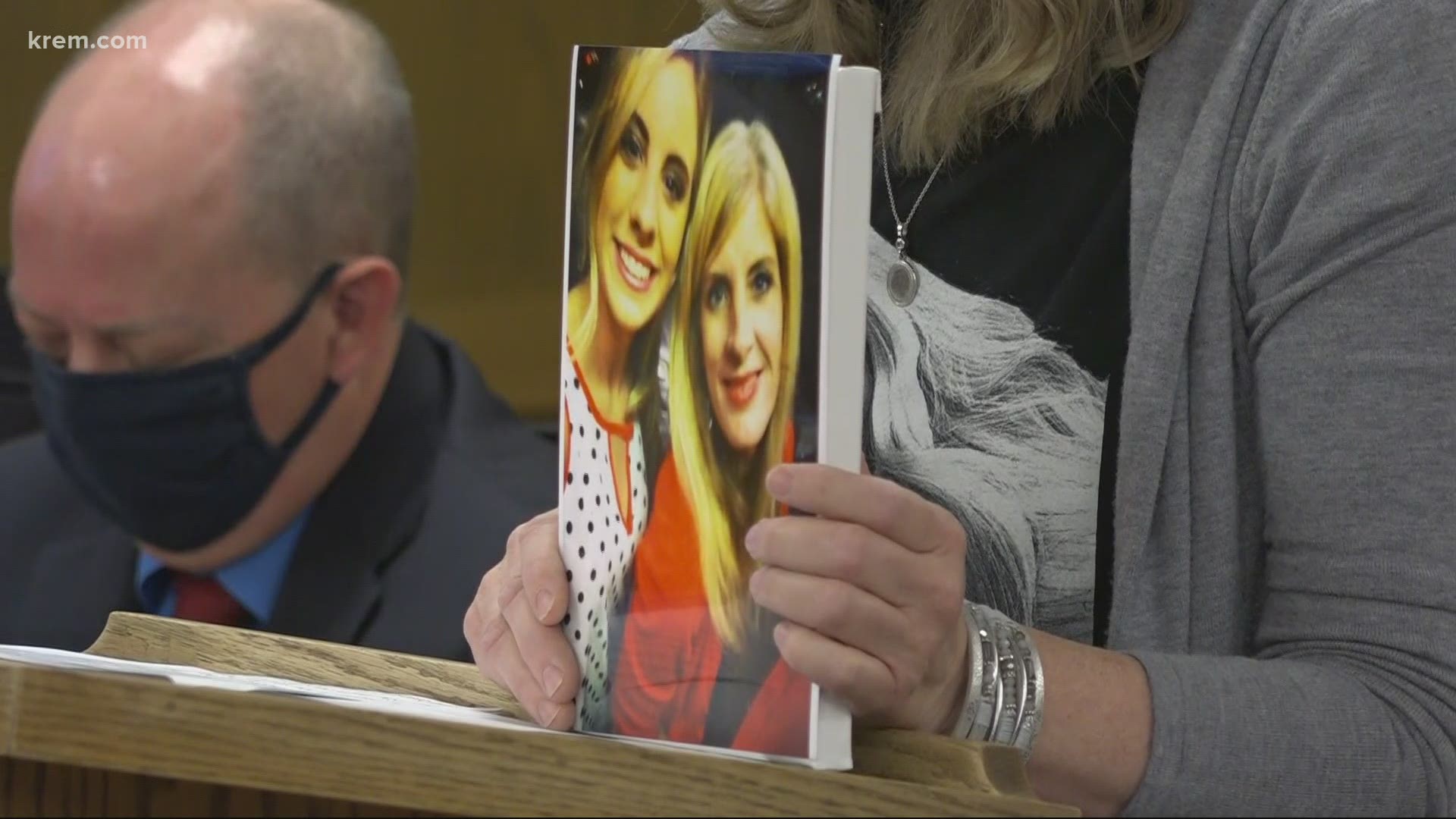 A judge sentenced Anthony Fuerte to 30 years in prison for the murder of Makayla Young, 24, at a Spokane motel in February 2020.

Fuerte plead guilty to first-degree murder as part of a plea deal. The sentencing is exactly what was recommended in the deal.

"I'm sorry for taking someone so special away from the people that love her," Fuerte said. "I feel awful for what I've done. There's not a day that goes by and think about what I did. I'm sorry for the hurt and the pain that I caused because I looked at the pictures on the shirts that you wear, I can't imagine the pain that you feel. And I know sorry is not enough. I was just on drugs. And I never imagined I could have done something like this. I'm sorry for taking her away from you."

Prior to his apology, Young's family members testified. Michael and Christy Young told the judge they will now spend the rest of their days living the unimaginable.

"The last Father's Day card I received from Makayla said, 'Daddy, you carried me my whole life. When you are old and can't walk, I'll be there to carry you,'" Michael said. "You stole Makayla's physical future of carrying me. My faith is Makayla is carrying me right now and always."

In the courtroom, Makayla's family sobbed softly for the young woman who meant to much to them.

"Your Honor, she was everything for me," Makayla's sister Emily said. "When I miss her, I like to picture dancing silly in our living room. And me and my siblings laughing hysterically, or her coming and sitting at the end of my bed, or asking me to do her makeup."

Fuerte's attorney gave a presentation to the judge explaining his difficult childhood. His mother and step father were drug addicts who had a history of domestic violence. The attorney claimed both Fuerte and Makayla used drugs the night of her death.

"Admittedly what he did to Makayla Young in February of 2020 was horrible and unforgivable," the attorney said. "There is no justification. There is no excuse to be is not here to make any excuses. But the question people keep asking is why? Why did this happen? It happened because of drugs, methamphetamine and heroin specifically."

Young's family told KREM 2 they are disappointed Fuerte was only sentenced to 30 years in prison. They wish prosecutors would have done more. Her sister Emily said they want to create a law in Makayla's name that will make a difference in the criminal justice system.

Makayla Young, 24, was found dead on Feb. 28, 2020 from multiple stab wounds and the Spokane County Medical Examiner later ruled her manner of death as homicide. Two men, Fuerte and Lionel White, were charged in relation to Young's death.

Young's sister, Emily, previously said in a statement released after her death that "Makayla was a bright light in everyone's life" who "always had a smile on her face." Young "loved hard and was trusting of everyone," Emily added.

Fuerte, who was in a romantic relationship with Young, faced murder and robbery charges in connection with her death and took a plea deal in the case. If Fuerte had decided not to take the plea deal, the case would have gone to trial in mid-June of 2021.

On Feb. 6, Fuerte and Young got a ride from a man identified as Joshua Thomas whose vehicle was pulled over during a traffic stop, court records say.

During the stop, an officer arrested Fuerte on a Washington Department of Corrections warrant. Young and Thomas were released and Fuerte was booked into the Yakima County Jail, according to court records.

Young was afraid Fuerte was going to kill her because "he believed she had set him up to be arrested," court records say. Fuerte and Thomas also had different gang affiliations.

On Feb. 25, 2020, Fuerte was released from the Yakima County Jail and returned to Spokane. Later that day, he called Young and said he wanted to get together. During the call, he told her, “Now I want to talk to you about what happened that night," court records say.

Young and a friend met up with Fuerte at a 7-11 in downtown Spokane later that night. Fuerte had a friend with him, identified as Lionel White, who was armed with an axe handle, court records say.

Fuerte gave Young a “bloody meth needle” and tried to get her to go to Portland with him. Young’s friend ultimately convinced her to stay in Spokane, as she believed Fuerte would harm Young if she went with him, according to court records.

Fuerte and White got a room at the Rodeway Inn on Houston Avenue in Spokane on Feb. 26, 2020 and checked in at about 11 p.m. that night, court records say.

Young went to the room at about 1 a.m. on Feb. 27, according to court records. Police officers responded after receiving a call around the same time from the room below stating that a man and woman were arguing.

White, who was leaving the room when officers arrived, said the occupant of the room was inside with a woman and told him to leave. Police checked the room and it did not appear that anyone was inside.

White set some bloody towels outside the room at about 11 a.m. on Feb. 27 and asked maids for additional towels.

At about 3 p.m. on the same day, police received multiple calls from people near the Rodeway Inn who reported that Fuerte, who was “covered in blood,” had attempted multiple carjackings, according to court records. Fuerte was arrested at a coffee shop on North Division Street after attempting to steal a car.

Young’s body was discovered inside of the hotel room at about 10:50 a.m. on Feb. 28. She had been stabbed multiple times and there was blood "sprayed around the room," court records say. It appeared as if someone had attempted to sever her head from her body.

Supporters have donated more than $11,000 to a GoFundMe campaign set up to support Young's family since her death.