Wednesday's was the ninth escape from the facility since December 2015 and the first since new security measures to prevent escapes were installed. 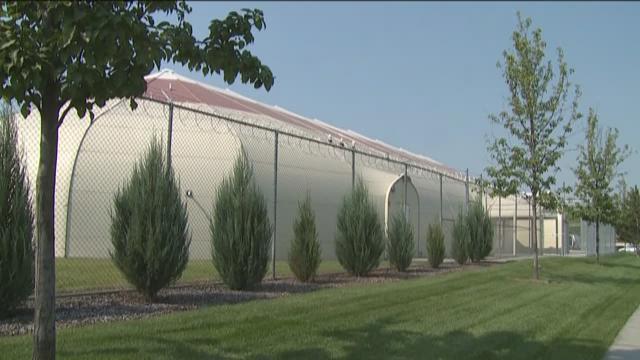 Officials said Eric Garcia, 37, of Caldwell apparently cut through siding in the shower area of the facility on Wednesday morning and climbed over the 10-foot fence - which is topped with razor wire.

Garcia was apprehended by Caldwell police and and Canyon County deputies at around 11:15 a.m. - almost immediately after Garcia escaped.

Garcia was being held on a charges of felony domestic battery with traumatic injury, felony attempted strangulation, and a felony parole violation. Additional charges are pending.

The Canyon County Jail has long been plagued by escapes, particularly at its tent facility. Eight inmates total broke out last year in six separate attempts. All were eventually recaptured.

The string of escapes prompted officials to spend several hundred thousand dollars improving the jail's security. Upgrades included building a fence around the facility, replacing a door, installing a fence lid over the recreation area and constructing a hard wall around the inside of the tent facility.

Wednesday's was the first escape since the county installed the security upgrades.

The tent jail was originally designed to house work-release inmates, but overcrowding at the jail has forced staff to move other prisoners into the facility as well. The tent currently houses about 95 minimum security inmates,

Canyon County Sheriff Kieran Donahue has been outspoken on the need for a new jail, calling the security improvements "a Band-Aid" in a July interview.

On Wednesday, the sheriff promised a full internal investigation to determine how Garcia got out and identify any "shortcomings" in jail security.

"The upgrades were necessary, without question, and they are in compliance with what the city has required," he said. "But the fact is the county needs to look long-term down the road, at what the needs are of this county for a jail."

Canyon County officials on Wednesday met in a scheduled meeting with the DLR Group - the firm that was retained this summer to evaluate the jail and determine the county's current and future needs.

“The importance of working with the DLR Group and their vast knowledge and experience in assessing county jail needs cannot be overemphasized,” Donahue said. “It’s through these efforts that the safety of the public is underscored.”