Davidson said he “might have asked” the judge if he could reverse course on Ammon Bundy's failure to appear warrant and allow the trial to proceed. 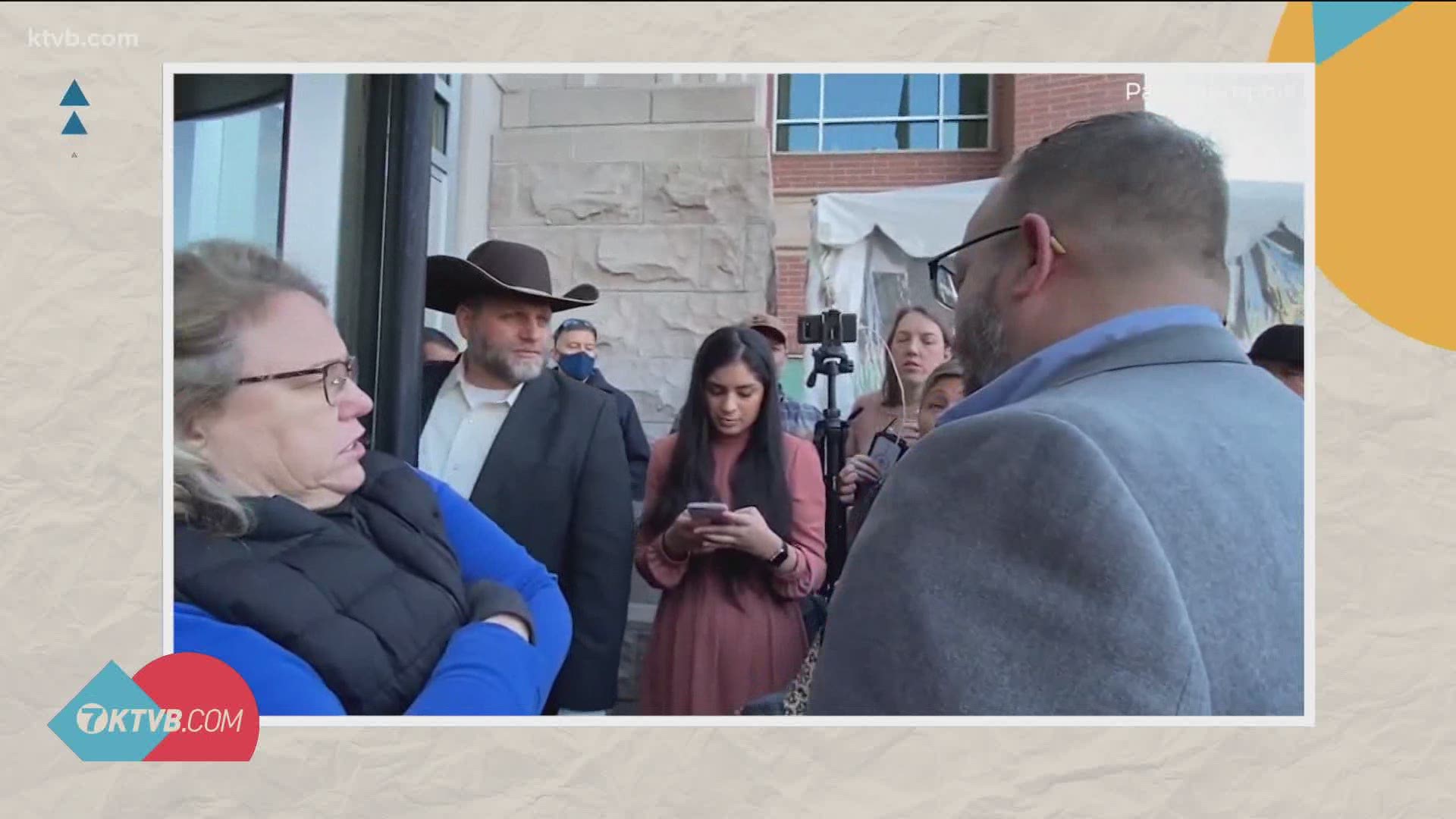 BOISE, Idaho — Revelations this week that Ada County Commissioner Ryan Davidson requested that a judge grant Ammon Bundy access to the Ada County Courthouse despite Bundy flouting the courts’ COVID-19 safety protocols drew criticism from one fellow commissioner and raised questions about whether the conversation was legal.

Davidson told the Idaho Press he had a “brief” conversation with Magistrate Judge David Manweiler on Monday regarding a case against anti-government activist Bundy, who was set to go to trial but refused to wear a required mask to enter the Ada County Courthouse. Manweiler issued failure to appear warrants for Bundy and another man, both of whom were arrested amid an organized protest with dozens of Bundy supporters outside the courthouse.

Davidson told the Idaho Press he asked the judge “if there’s any accommodation that could be made” to allow Bundy to enter the building without a mask. Davidson also said he “might have asked” Manweiler if he could reverse course on the failure to appear warrant and allow the trial to proceed. Manweiler, who has not returned phone calls requesting comment, did not reverse the bench warrants.

Ada County Commissioner Kendra Kenyon said in a phone interview Wednesday the three-person county board plans to discuss Davidson’s actions with its legal staff during a future executive session. Kenyon, a member of the board since 2018 and the sole Democratic commissioner in Ada County, said she is “dismayed.”

“This past board worked really, really hard to create a high level of professionalism … these past two years,” Kenyon said. “And I feel that this type of behavior does not meet the expectations of the office.”

Kenyon added, “I just want to make clear to the public that this was not condoned by the board. I’m sorry that we’re going down this path.”

Davidson and Chairman Rod Beck were elected to the Ada County Commission last year, after defeating Democrats Diana Lachiondo, the incumbent, and Bill Rutherford in the November election.

When asked for comment Wednesday, Beck said in an email, “As Chairman of the Board, it is my view that each Commissioner is entitled to use their best judgement and make their own decisions about what conversations should take place. Any questions or concerns about the legality of Board members actions need to be addressed to Ada County Prosecutor Jan Bennetts.”

It’s unclear whether Davidson broke any laws, although some, including Rep. Greg Chaney, R-Caldwell, have pointed to Idaho Statute 18-1353, suggesting it may apply. The code on “bribery and corruption” forbids officials from privately addressing “any public servant who has or will have an official discretion in a judicial or administrative proceeding” with “any representation, entreaty, argument or other communication with purpose to influence the outcome on the basis of considerations other than those authorized by law.”

Ada County does not govern Idaho’s district court judges — they are state employees — but the Ada County Board of Commissioners has budgetary authority over the courts.

The Idaho 97 Project, a privately funded advocacy group that formed in opposition to anti-mask advocates, on Wednesday filed a complaint with the Attorney General’s Office requesting Davidson be investigated for violating the bribery and corruption statute.

“When an elected official — a member of the county executive branch — attempts to curry favor with an officer of the judicial branch, on behalf of a criminal defendant who refuses to follow public health requirements and court rules established by the Idaho Supreme Court, that gives rise to concerns of corruption and Attorney General Lawrence Wasden should investigate,” stated Mike Satz, the newly named executive director of The Idaho 97 Project and a licensed attorney who previously was associate vice president of the University of Idaho, Boise.

Davidson told the Idaho Press he was “not trying to influence” the judge’s decision.

“As an elected official I’m very opposed to the current COVID restrictions that are in place by the Idaho Supreme Court,” he said. “I’m working on finding a solution to that. I’m working to have people be able to get into the courthouse without masks and social distancing. That’s my personal belief.”

University of Idaho Law Professor Shaakirrah Sanders, an expert in criminal law procedure, said Davidson’s conversation with the judge “definitely raises my eyebrows,” but more information is needed to determine impropriety. Idaho Code, along with American Bar Association’s Judicial Code of Conduct, forbids so-called “ex-parte” communication, or communication about a pending case with a judge outside the presence of parties or their lawyers, except in limited circumstances. For example, courts allow prosecutors to bring warrants to a judge without a defendant’s knowledge.

“I don’t know if there is any procedure that authorizes a county commissioner to make requests of a judge when it comes to a suspect’s bail conditions or trial conditions,” Sanders said.

However, Sanders said, individuals have First Amendment rights to speak. If a member of the public wants to give their opinion on a judicial ruling, “that’s a whole other thing,” she said.

“If this commissioner is acting in an official capacity, then this is a serious concern because of the separation of powers issues, how improper it looks to pressure a judge in that way, even if that was not your intent,” Sanders said. “And I want to make clear: There doesn’t necessarily need to be intent here. The appearance of it could be enough, depending on the nature of the conversation.”