Taylor Kemp, 20, was ordered to pay more than $391,000 in restitution  for the damage and the cost of fighting the fire. 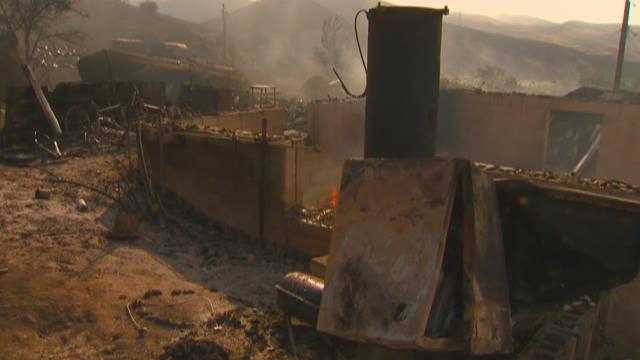 BOISE -- The house Van Danielson's father built in the 1950's sheltered his family for four generations.

It was destroyed in an instant.

In court Friday, Danielson said he wanted 20-year-old Taylor Kemp to understand what he set in motion when he lit a firework up on Table Rock June 29, 2016.

"Mr. Kemp, through his ignorance and stupidity, took everything that I had inherited from my parents," Danielson said. "There’s nothing left.”

The Table Rock Fire scorched 2,600 acres of the Boise Foothills and threatened hundreds of homes, sending fire crews scrambling to contain the flames that raced up one hillside and down the next. Danielson's home was the only one that burned.

Kemp was sentenced Monday to 180 days in jail - although he'll spend just four of them in a cell - and 144 hours of community service. He was also ordered to pay more than $391,000 in restitution to Danielson, the City of Boise, the Bureau of Land Management, and Idaho Power.

But Danielson said no amount of money could replace his family home.

"I still have a hard time digesting that it's gone, and will not come back," he said.

Kemp was shooting off fireworks near Table Rock when one of them ignited the dry grass, quickly spreading out of control. In the hours that followed, he called KTVB, saying he had witnessed drunken teenagers start the fire, then drive away. Kemp said he called 911 and tried to extinguish the fire, but quickly realized it was moving too fast.

It took days for firefighters to get control of the blaze. The blackened burn scar lingered throughout the summer, a constant reminder of the fire to Boise residents.

Kemp was charged with misdemeanor unlawful use of fireworks in September, after admitting to a detective that he had set the hillside ablaze. He later told KTVB he had been pressured into confessing.

He pleaded guilty to the charges in February, but maintained that it was either a lightning strike or someone else's firework that sparked the blaze. Judge James Cawthon rejected that argument earlier this week, ruling that Kemp was the person who caused the fire.

Kemp sat silently looking straight ahead for most of the hearing, and declined to make a statement before the sentencing was handed down. Danielson said that came as a disappointment: He had hoped Kemp would apologize and take ownership of his actions, he said.

"He showed no remorse, not even an 'I'm sorry,'" he said after the hearing. "That speaks volumes."

Donald Price, Kemp's defense attorney, argued that Kemp should pay restitution for Danielson's burned house, but shouldn't be on the hook for firefighting costs because the crews who responded were just doing their jobs.

"What are his chances to be a productive citizen if he's saddled with this type of debt and restitution payments that the state is contemplating?" he asked.

It was only through the heroics of the firefighters and officers - who worked through the night in smoky, dark, exhausting conditions - that no one was killed and only one house was lost, he said. Cawthon called lighting off a firework in the bone-dry foothills in June "a horribly reckless, thoughtless act."

Kemp should have known better, the judge insisted.

"You can't live in Boise Idaho, you can't live on the Boise front one summer, without knowing the ever-present danger of fire," he said. "It's everywhere you look."