Two days after her birthday party was interrupted by a knife-wielding man, a little girl is dead. 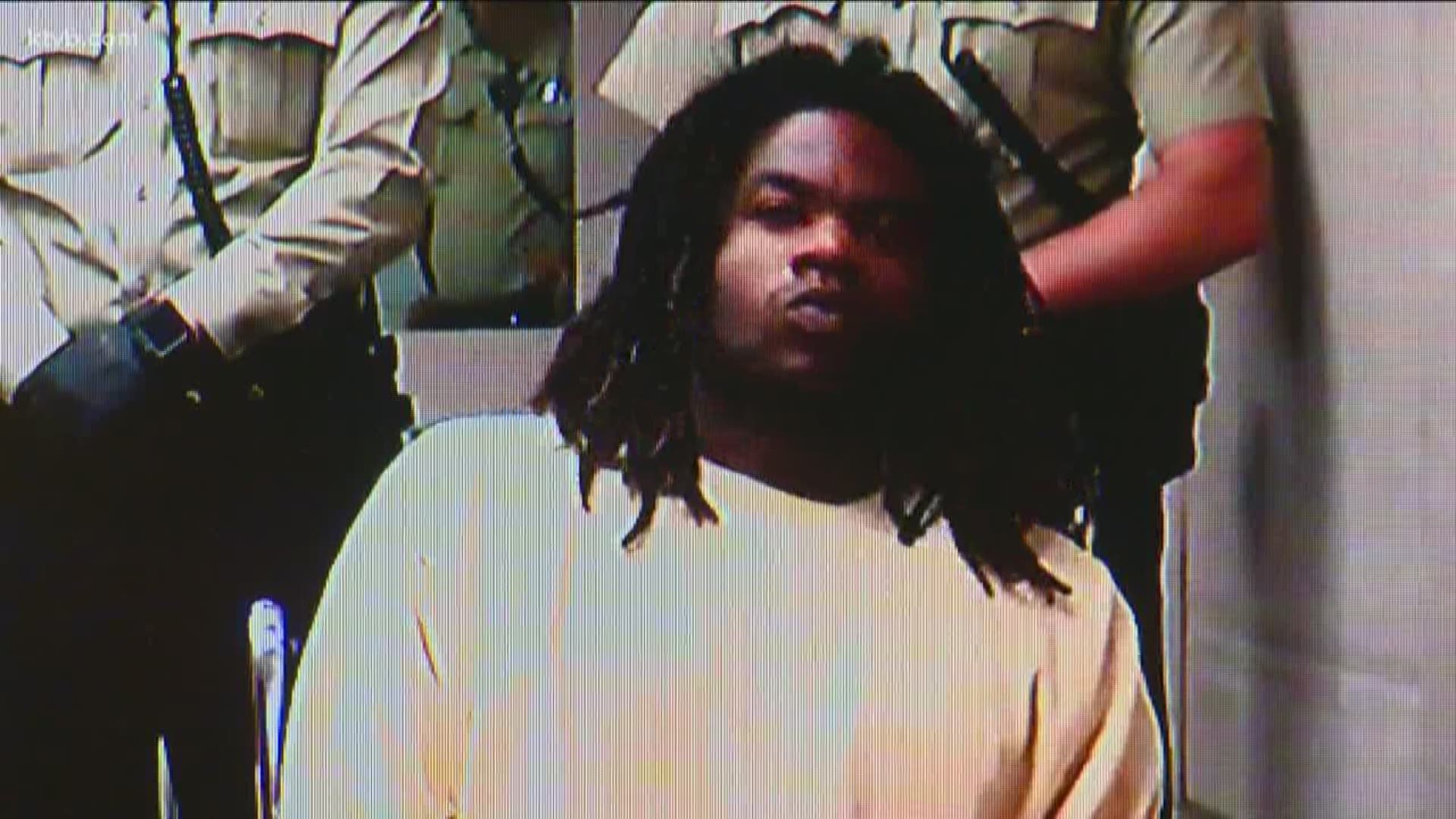 BOISE -- Two days after her birthday party was interrupted by a knife-wielding man, a little girl is dead.

Ruya Kadir, the youngest victim in Saturday's stabbing spree at the Wylie Street Station apartments in Boise, died from her injuries Monday in the Salt Lake City hospital to which she had been airlifted in a desperate bid to save her life.

She was three years and two days old.

According to the International Rescue Committee, Ruya and her mother came to Boise in December 2015 from Ethiopia.

“Our caseworkers describe Ruya as a child who always sparkled when she walked into a room. She was her mother’s princess, always the center of attention, and loved pink and Disney princesses," IRC CEO David Miliband said in a press release. "She had just turned three years old Saturday, and according to our IRC colleagues in Boise, was the epitome of sweetness."

Her father is in Turkey.

"Ruya's parents are enduring every parent's worst nightmare, which is made doubly cruel by the fact that they fled to America to escape conflict in Ethiopia," Miliband said.

"Our local team is doing everything possible to support the family – and the other refugees injured on Saturday – in this moment of extreme distress and fear."

Timmy Earl Kinner, 30, is accused of plunging a large folding knife into Ruya's body during a bloody, unexplained rampage that injured eight other people and sent waves of horror reverberating through Boise's tight-knit refugee community and beyond. The nine victims were from Iraq, Syria and Ethiopia, police say.

MORE: Young witness to Boise mass stabbing: 'We saw a killer, we didn't want to get stabbed'

The surviving victims include two 4-year-olds, a 6-year-old, an 8-year-old, a 12-year-old, and three adults who tried to intervene. A prosecutor on Monday described their injuries as "very, very significant," with one woman stabbed as many as 15 times, according to relatives.

Kinner, who was captured by police at the scene, at first showed little reaction when Judge Russell Comstock read off his charges during Monday arraignment: One count of first-degree murder, eight counts of aggravated battery and one count of use of a deadly weapon in the commission of a felony

But after Comstock asked Kinner whether he understood the charges against him, the suspect

Kinner also told the judge he wanted to represent himself, but Comstock balked, appointing him a public defender anyway, telling the suspect he could go forward alone at his preliminary hearing.

Prosecutor Dan Dinger asked the judge to set Kinner's bond at $10 million, or order him held without bond. Kinner is homeless, with no ties to Idaho and felony drug and weapons convictions in Tennessee, the prosecutor said.

And in just the few days he has been held in the Ada County Jail, Dinger said, Kinner has been written up twice for "aggressive behaviors," including threatening a member of the jail staff.

Comstock ultimately ordered Kinner held without bond, saying he would be an "an extreme risk to the community" if allowed to get out of jail on bond.

A motive in the mass stabbing is unclear, and it does not appear that Kinner knew the victims.

Police say other residents in the apartment complex had let Kinner stay with them for several days, but fed up with his behavior, told him to leave on Friday. Angry over getting kicked out, Kinner came back to the apartment with a knife Saturday night to "exact vengeance," police say.

The person he had stayed with wasn't home. But a few doors down, Ruya's birthday party was

Boise Police Chief Bill Bones said victims were found both inside the apartment complex and down in the parking lot. In dispatch audio obtained by KTVB, first responders to the scene sound increasingly frantic as the scope of the carnage becomes clear. In several of the radio transmissions, responders are near tears.

They're requesting as many units as we can get.

Advise medics that there's some child victims on Wylie Lane.

Responding to the location on Wylie lane for two victims, apparently we have another victim

down inside the apartment that we're still looking for.

"The crime scene, the faces of the parents struggling, tears coming down their faces, the faces of the children in the hospital beds, will be something that I'll carry with me for the rest of my life," Bones said.

Officers and paramedics were not the only ones shaken by the attack. As the news spread across the Treasure Valley, members of the community showed up at the complex in a steady stream, bearing meals, flowers, a unicorn pool floatie. On the walkway outside, well-wishers drew sidewalk chalk hearts and scrawled messages - YOU ARE WELCOME HERE.

"We were heartbroken today to learn of the death of one of Saturday’s young victims. The thought of a happy occasion like a child’s birthday party being turned into the darkest of sorrows in such a vicious way is almost unfathomable," he said. "I know every Boisean joins me in sending our deepest condolences to her family and loved ones, as well as continued thoughts and prayers to the other eight victims recovering from their injuries."

Full Circle Exchange (FCE) and Happy Day Brands work with dozens of refugee families resettling in the area to connect them with resources and employment. The nonprofit and its employees are very close with Ruya and her mother, and issued the following statements to KTVB:

“We are shocked and devastated at the horrifying tragedy that has befallen our dear friend, whose beautiful daughter lost her life to the senseless violence that unfolded earlier this week. We at Full Circle Exchange and Happy Day Brands have had the utmost honor to work with so many in the refugee community and we cherish the time we were able to share with the effected families and the sweet little girl whose life was so abruptly taken. We mourn with her family as they face an unfathomable loss.

We want to thank our city officials, first responders, friends, and allies in the refugee community Agency for New Americans and International Rescue Committee (IRC) for their unwavering support to all of those affected by this tragedy. It is agonizing and heartbreaking to know that the sense of safety that so many families in the refugee community have worked to rebuild, has now been shaken.

So as our friend Julianne Donnelly from IRC said, there is work to be done. There is trust to rebuild, families to relocate, lives to grieve, and spirits to lift. But, as our resilient community has shown so deeply over the past several days, we know this tragedy cannot and will not define us. Boise is, and will remain, a welcoming, compassionate, and loving place for every single person that calls it home.”

“Ruya, was beautiful, strong, positive, and resilient just like her mother. She was the most important thing in her mother’s life, and it showed in how her mother did every single thing with her daughter and her daughter’s future in mind.“

Sarah Priddy, who worked directly with Ruya and her mother through Full Circle Exchange, said in a statement to KTVB:

“Everyone at FCE could see that Ruya was truly the light of her mother’s life. Her bright spirit, sweet smile, and innocent curiosity embodied so much of the hope that her parents had for a better life in this country. It was in their daughter, that her family found their safety.“

Police have said they have not found any evidence that the attack was a hate crime, or motivated by the victims' status as refugees.

Ada County Prosecutor Jan Bennetts declined to say after Kinner's hearing whether her office will seek the death penalty, but described the stabbing the worst mass-casualty case she had dealt with in her nearly 24-year tenure as a prosecutor.

Bennetts said the community could be confident that prosecutors will be diligent in working on the case.

"Both law enforcement and my office are committed to public safety. We work very hard and very diligently at keeping our community safe, and we will continue to do that," she said.

Kinner is due back in court July 16 for a preliminary hearing.

The International Rescue Committee is heading up efforts to provide the affected families support and counseling, including temporary housing and travel logistics for those who need out-of-state medical care. For more information on how to support the victims and their families, visit the International Rescue Committee, the Boise IRC and the Agency for New Americans.