SALEM, Ore. -- Riders from Oregon to Maine are preparing to make a special delivery cross-country, handing off their cargo from one rider to the next until it reaches its final destination. 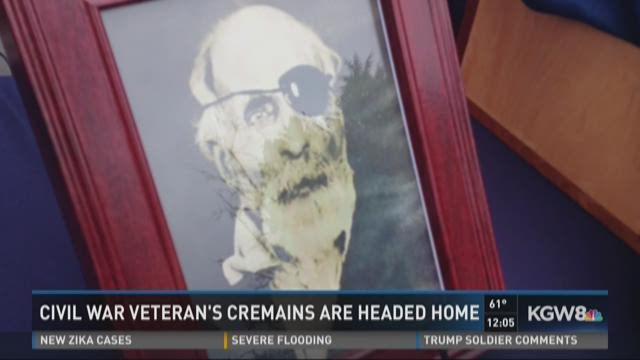 SALEM, Ore. -- Riders from Oregon to Maine are preparing to make a special delivery cross-country, handing off their cargo from one rider to the next until it reaches its final destination.

“It’s kind of like the Pony Express across the nation,” said Mike Edgecomb, state captain for the Maine Patriot Guard Riders.

Although delivery will be done by motorcycle instead of pony, and along paved interstate highways instead of dusty wagon trails, it still evokes the romanticism of the legendary mail service. And this cargo, the cremated remains of a Civil War soldier, is far more precious than any letter.

Members of the Patriot Guard Riders, a nonprofit organization that performs services for fallen military heroes and deceased veterans, will provide Pvt. Jewett B. Williams a long-awaited escort to his final resting place in his home state of Maine. 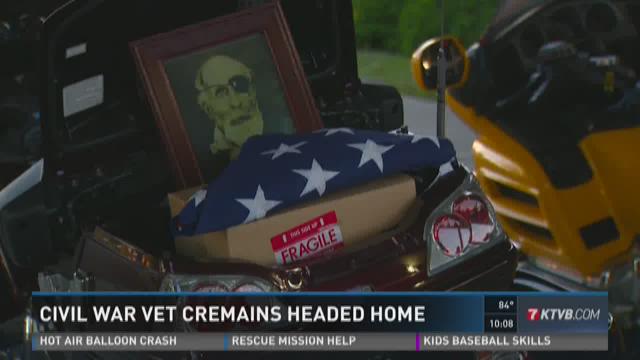 The journey begins in Salem, after a 9 a.m. ceremony Monday, Aug. 1, at the Oregon State Hospital during which custody of the cremains will be transferred. Williams died at the hospital in 1922, and his cremains were never claimed, until now.

A typical mission for local Patriot Guard Riders might draw eight to 20 participants, but the unique circumstances surrounding this one could bolster the turnout.

“Some people have contacted me and said they plan to take the day off work to do this,” said district ride captain Blake Lee, who lives just southeast of Salem. “It’s rare to get to do anything with a Civil War veteran, extremely rare.”

State captains for the Patriot Guard Riders — from John Hanan II in Oregon to Edgecomb in Maine — are handling logistics in their respective areas and coordinating handoffs with neighboring states.

Their mission is to deliver the cargo to Togus National Cemetery in Chelsea, Maine. The cemetery has been closed to new interments since 1961, but special permission has been given to bury Williams alongside his brothers in arms from the 20th Maine Volunteer Infantry Regiment.

Edgecomb figures hundreds, if not thousands, of Patriot Guard Riders will participate.

“I know they have done other multi-state missions, but this is probably the first nationwide,” he said.

Last year, Patriot Guard Riders escorted the cremains of a Marine staff sergeant, who served multiple tours in Iraq and Afghanistan, from California to Georgia instead of allowing the military to mail his ashes home to his mother.

The ceramic urn containing Williams' cremains has been removed from a memorial wall on the state hospital grounds and will be packed in bubble wrap and placed in a wooden box before being secured on the back of a motorcycle. If only his buddies from the 20th Maine could see him then.

His journey home will wind through at least 19 states and cover more than 3,200 miles.

“There’s been a lot of work involved to make this happen,” Lee said.

Williams has no known living relatives. After the war, he lived in Minnesota for several years with his wife and six children. They moved to Washington sometime in the 1890s. He later lived in Portland, where newspapers from 1914 to 1919 reported that he was among veterans scheduled to speak during Memorial Day programs at local schools.

Census records from 1920 list Williams as a widower living in Portland and working as a laborer at the age of 75. He was in poor health and suffering from “progressive senile dementia” when he was admitted to the state hospital on April 14, 1922. He died three months later of cerebral arteriosclerosis — thickening and hardening of the walls of the arteries in the brain — according to his death certificate. He was 78.

No one came forward to claim his cremains. Like those of so many other patients, they were placed in a copper urn and stored in various locations on the hospital grounds, including on a shelf in a shed, until a memorial was built in 2014. The ashes of 3,423 people who died between 1914 and 1971 were placed in the niches of the columbarium wall. Each is remembered with a marker engraved with their name, urn number and lifespan.

The spelling of Williams’ first name is Jewitt on that marker. It also is spelled that way on his enlistment and hospital admission records, although Jewett is written across a photograph accompanying the hospital records.

That is the only known photograph of Williams, who has a white beard and a black patch over his left eye.

The cremains of 18 veterans and two spouses of veterans from the state hospital were interred in May 2015 at Willamette National Cemetery in Portland. At that time, the hospital had no information indicating Williams was a veteran. He was just patient No. 5426 in urn No. 415.

Phyllis Zegers of Roseburg came across his enlistment record on Ancestry.com while doing research on people whose cremains have not been claimed. She included the information in a bio on Williams that she posted on Find A Grave, an online database of cemetery records.

An author and historian in Maine, while researching the fate of 20th Maine veterans, discovered records showing the cremains of a former private had been sitting unclaimed on a shelf at the Oregon State Hospital since his death in 1922. The historian proposed the idea of returning the soldier's cremains to his home state for a proper burial at a meeting of the governor's cabinet in 2015.

Nearly a century after Jewett Williams died and no one came forward to claim him, the veterans’ affairs offices in two states and an army of Patriot Guard riders are atoning for the slight.

The Oregon Department of Veterans’ Affairs and the Oregon State Hospital are coordinating the transfer ceremony that will be live-streamed on the ODVA’s Facebook page.

A color guard presentation will be performed by Oregon-based Civil War re-enactors. Mitch Rice, a member of the group that performs re-enactments of the 1st Oregon Volunteer Infantry Regiment and the 20th Maine, said it's an honor to be a part of this mission.

“The circumstances are remarkable,” Rice said. “The fact that a Maine soldier's cremains are actually returning to Maine, and the fact that we re-enact that regiment. There are thousands of regiments. What are the chances?”

A convoy of each state's Patriot Guard Riders will escort the cremains across their state and then pass them off to the next group of riders, with others joining the procession at entrance ramps and fuel stops.

In Oregon, the escort will depart the memorial at approximately 9:30 a.m. and travel north on Interstate 5 to Interstate 205, and from there head east on Interstate 84. Stops will be made at Gladstone, Cascade Locks, The Dalles, Stanfield and La Grande. Oregon riders will hand off the cremains to Idaho riders in Ontario.

Hanan, state captain for the Oregon Patriot Guard Riders, said extreme care will be taken in securing the cremains in a motorcycle trunk or saddle bag.

“It’ll be whatever bike has the best method and safest way to carry it,” Hanan said.

The ceramic urn will be packed in a box 14 inches long, 10 inches high and 8 inches wide. For overnight security, some states will use extra care. In Idaho, for example, the cremains will be housed overnight at Cloverdale Funeral Home in Boise.

Edgecomb, state captain for the Maine Patriot Guard Riders, will meet the escort in Gettysburg, Pennsylvania. The cremains are scheduled to arrive at the Maine border around Aug. 22, when a full police escort will lead them on the final leg to Togus National Cemetery, which Edgecomb said is about 120 miles.

Williams will be interred with full military honors on Sept. 17 as part of a 150th anniversary celebration at Togus.

“Forward This” appears Wednesdays and Sundays and highlights the people, places and organizations of the Mid-Willamette Valley. Contact Capi Lynn at clynn@StatesmanJournal.com or 503-399-6710, or follow her the rest of the week on Twitter @CapiLynn and Facebook @CapiLynnSJ.

Pvt. Jewett B. Williams was 21 when he enlisted on Oct. 1, 1864 in Company H of the 20th Maine Volunteer Infantry Regiment. His home state is listed as Maine, which reportedly answered the call for troops with a higher proportion of its men than any other state. The 20th Maine is perhaps the state’s most famous unit, participating in several decisive actions that helped the Union secure victory during the later stages of the war. The regiment made a daring downhill charge to defend Little Round Top and help win the Battle of Gettysburg. It also was part of the Union force that accepted Confederate Gen. Robert E. Lee’s surrender at Appomattox Court House.