On Friday, KTVB spoke with a Wilmington, North Carolina, resident waiting out the storm and the owner of a Boise company working to defend South Carolina homes. 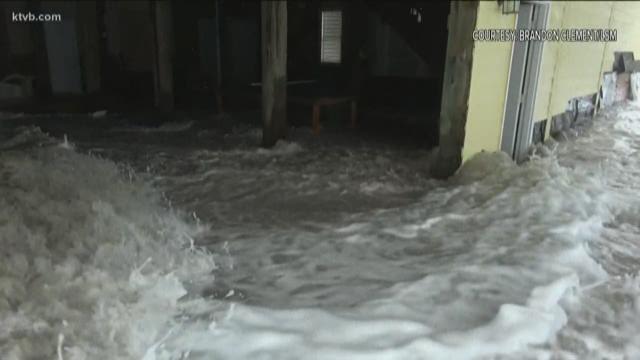 While a lot of people did leave the coast for safety, some stayed behind and others headed to the coast to help defend the coast.

A Boise-based company, Flood Defense Group, is on the ground in Charleston, South Carolina, and working around the clock to help locals prepare for flooding.

"We have fortified 12 different houses, we are babysitting three of them and standing within the perimeter to make sure the defenses hold," said Keith Anderson, owner of Boise's Flood Defense Group.

Specifically, Anderson and his team are working to build barriers around Charleston homes.

"Right now we are going through the final preparations and making sure we are watertight. Because of that water comes through, it is going to be a problem," said Anderson.

When the worst does hit, Anderson and his crew would like to shelter in place, but Anderson says if it comes to it they are ready to jump into action.

"To the greatest extent possible, we will remain in a safe location, but on the same token we have to monitor our defenses to make sure we don't have a breach and make sure water doesn't start coming in," said Anderson.

Some communities, like Charleston, are waiting for the worst. In other places, they are already seeing it.

In Wilmington, North Carolina, at least two people have been killed as heavy rains and winds punish the coast.

KTVB spoke by phone Friday with Wilmington local Pat Litzinger who is waiting the storm out.

Most people were asleep and woke up this morning to the roaring sound of wind and starting to get pelted with rain in all directions," said Litzinger.

At 11 a.m. Friday, the wall of the eye loomed over Litzinger's home.

"Pretty intense. There is a roaring sound due to the sound the wind creates. We can hear branches breaking, you aren't sure where they are breaking or if they are coming close to your house," said Litzinger.

Litzinger and his family say they are doing well in their home only three miles from the beach. All they can do now is wait for it to pass.

"We made a conscious decision, my family and I talked about it, we thought we would have enough preparations to be safe, and in fact, we have been. So for us, it was the right decision," said Litzinger. “This is not the best of circumstances, but we are trying to make the best of it.”