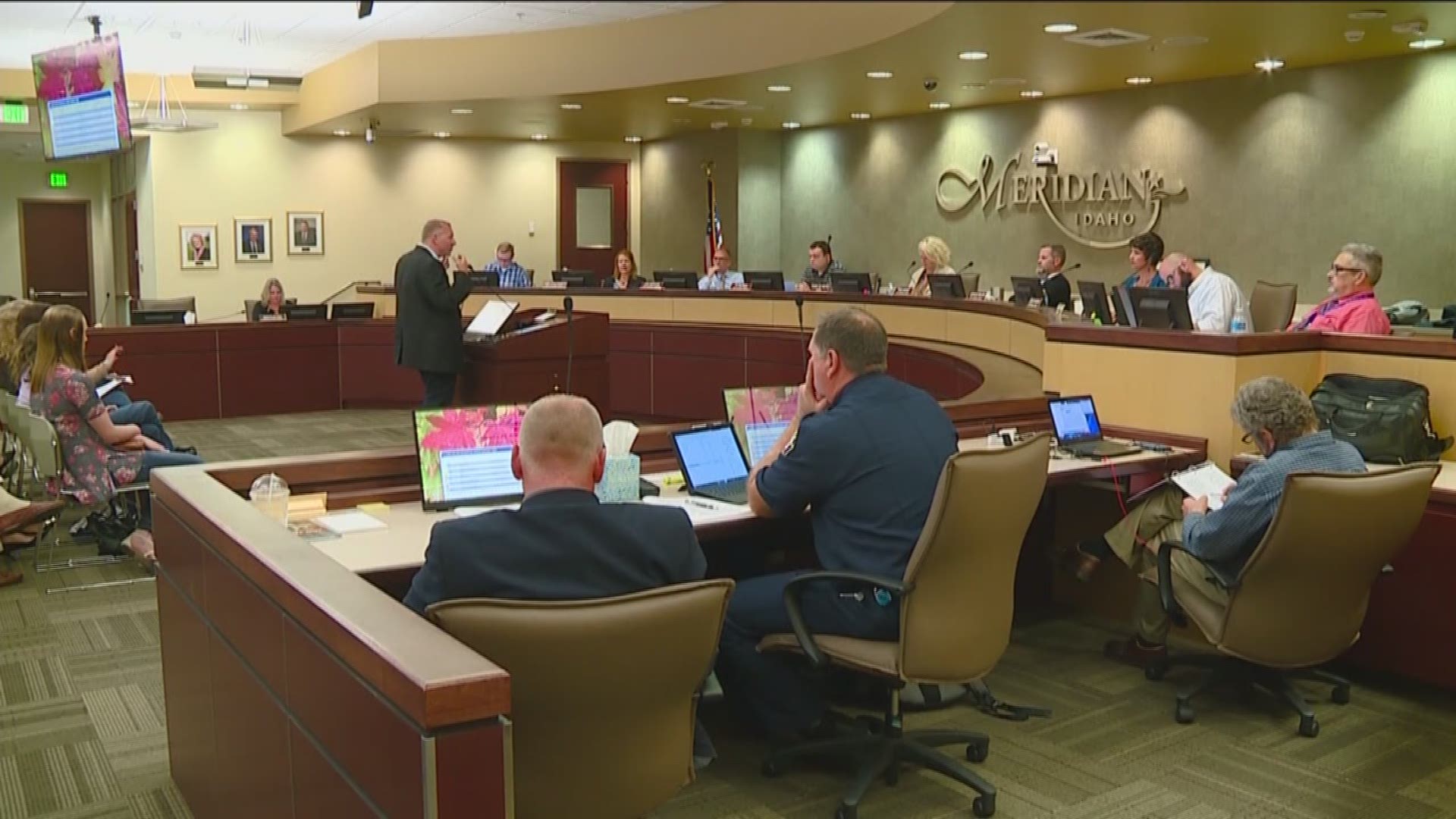 MERIDIAN — The City of Meridian didn't have an anti-discrimination ordinance based on sexual orientation and gender identity: until now.

On Tuesday, they took up a proposal to put one on the books - a monumental move for the city that sends a strong, far-reaching message.

Council took up the proposed ordinance around 6:30 p.m. Tuesday, with testimony going late into the night. After a brief recess, council made a decision a little before 11 p.m: they voted four to two to pass the non-discrimination ordinance. Councilmen Treg Bernt and Ty Palmer voted in opposition; Palmer citing the need for more time to go over and make changes to the language in the ordinance, and Bernt citing his deep philosophical view of the role of government.

Both Bernt and Mayor Tammy de Weerd - though she didn't cast a vote - were adamant about this type of legislation needing to be discussed at the state level. They expressed frustration, with Bernt says he's appalled it hasn't gone anywhere at the statehouse.

A few of the council members in support became emotional, saying this is their opportunity to do something special and make a statement to their community and the entire state. They said it is about civil liberties, equal rights and protection, and everyone deserving love.

Meridian City Council chambers were at maximum capacity; dozens of people testified on both sides of the issue, passionately explaining to council where they stand on the issue and why their city leaders should or should not pass the policy.

The non-discrimination ordinance ensures all people regardless of sexual orientation and/or gender expression/identity enjoy the full benefits of citizenship and are afforded equal opportunities for employment, housing and use of public accommodations.

It also recognizes protections of the exercise of religious beliefs, recognizing people within the city are provided certain protections under the First Amendment of the U.S. Constitution -

applicable to states by the 14th Amendment - for the free exercise of religious beliefs "as they seek to teach or exercise principles of religious faith that are fulfilling and central to their lives."

The language in the ordinance goes on to say, however, "these same Constitutional provisions which

these liberties must fall, so that no person within our city, regardless of sexual orientation and/or

City of Meridian Ordinance No. 18-1791 includes the following exceptions:

- "Any institute, bona fide club, or place of accommodation, which is by its nature distinctly private, provided that where public use is permitted that use shall be covered by this ordinance; nor shall anything herein contained apply to any educational facility operated or maintained by a bona fide religious or sectarian institution.

KTVB spoke with Meridian City Councilman Luke Cavener before the meeting. He told us council has been actively working for the last year to address this issue brought up by citizens.

"We want to strike a strong balance between religious freedom, business freedoms and really just not discriminating against any of our great residents in Meridian. And so I think the language in there really specifically addresses that and can really make all our citizens feel confident that their interests are being protected," Cavener told KTVB. "A good sign is that our citizens actually think that this law is already on the books and it is already happening. But the fact of the matter is that in meridian someone can be fired because they are heterosexual or homosexual or bisexual. Likewise, someone can be denied a place to live for an apartment because of who they decide they are in love with... That's not what Meridian is about. And it's something I'm looking forward to change."

A large number of people in attendance were in opposition. They brought up issues with this ordinance providing special privileges, hurting businesses, infringing on religious freedoms, with many arguing it shouldn't be handled by government but rather worked out in a civil setting. Many feel there is already recourse those in the LGBTQ community can take if they feel discriminated against.

"This ordinance gives a shallow nod to religious protections that already exist in federal and state law while sending a strong message to anyone that doesn't work for a religious organization that they aren’t free to live out their faith beyond the walls of their church or home," Brittany Jones, attorney and policy director for Family Policy Alliance of Idaho told council at the beginning of public testimony.

"We are not a community that is apologetic for our conservative ideals - morally, physically, or otherwise. We are a breath of fresh air to residents and newcomers alike. Our country was founded on Judeo-Christian beliefs and values," Laurie Burchfield, a realtor and Meridian resident, said. "You silence and rob of us of our religious liberty and substitute that with the whims of an activist agenda perpetrated on us and our children."

"I realize that discrimination is an issue but this is going to bring a a lot of unnecessary risk to the business community," Meridian resident Thad Butterworth told council. "This brings a lot of risk to those of us in the business community and I think there will be other businesses who, like me, will believe that we need to take our business elsewhere rather than continue working here because of the risk it presents to us."

But those in support say it gives protection and equal rights to people who may be discriminated against.

"This ultimately is about fairness and that as Americans, as Idahoans, as residents of Meridian we should have the freedom to feel safe in our every day life," Meridian resident Beck DelliCarpini told KTVB. "It is both personal and political for me. Personally, I am a substitute teacher, which is something that I do in order to support my family, and it’s stressful for me to have to go to work every day worrying about somebody accidentally finding out my sexual orientation and being terminated on the basis of that because I am not protected in Idaho."

"Second biggest city in Idaho: we have a lot of gay people that I know personally and I know people that don't feel comfortable being "out" that live here, too. And those people are just not protected and that is upsetting and, yeah, shocking," DelliCarpini added.

If people feel discriminated against they can file a claim. The first step is mediation with the city attorney. If it can be resolved through mediation, no charge will be filed; that may look like the defendant correcting their action, which may include training for them and employees, or their adoption of a nondiscrimination policy in their practices.

If the complaint alleging a violation can't be resolved through mediation, the report will be investigated and forwarded to a prosecuting attorney for a filing decision for a civil infraction. A violation of this policy is a civil infraction and $250 fine. There are other protections in place, as well: anyone who falsely reports a violation may be charged with the crime of False Reporting.