Data shows the majority of those moving into our area are coming from California, Washington, Oregon and Utah. They all need a place to live and that's impacting the real estate market. 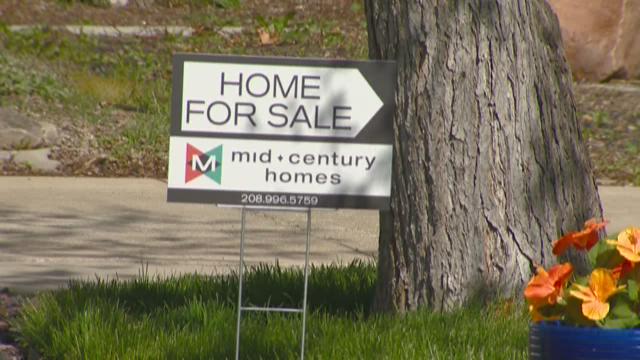 The Treasure Valley is booming and the real estate market is feeling the growing pains. In general, it has been great for sellers. However, if you're house hunting it can be difficult to close the deal with low inventory and a lot of buyers.

The Community Planning Association of Southwest Idaho, better known as COMPASS, estimates nearly 670,000 people live in Ada and Canyon Counties. That is an increase of 26,000 people from last year.

Data shows the majority of those moving into our area are coming from California, Washington, Oregon and Utah. They all need a place to live and that's impacting the real estate market.

"You don't get a lot of time," said Zeb Perez, who lives in Boise. "It's kind of hectic, really."

Perez's family recently sold a home in the North End and bought a new one in the Mesa area. He says you have to act quick.

"Getting to the house you want is a little tough," he said.

Kerryln Miler is the real estate agent for the Perez family. She says the biggest reason for the low inventory right now is the amount of folks moving here.

"I probably see 40-45 percent of my business from out of state buyers," said Miller.

The Idaho DMV reports 10,682 people moved to Idaho from California in 2016. Nearby Washington takes second place with 7,391. Oregon and Utah are next with a combined 7,493 people. When looking at all 50 states just over 48,000 people decided to pack up and make Idaho their new home last year.

Meridian is experiencing the biggest increase in residents, followed by Nampa. COMPASS estimates the population of Meridian will increase by nearly 7,000 people this year to almost 100,000.

Meridian Mayor Tammy de Weerd says they plan for a growing community but the city has limits.

House values have gone way up over the last several years. Miller, again, points to inventory and demand.

"You'll likely in this market do two or three offers before the house you actually get actually happens," she said.

And if you're looking for a smaller home, it can be even more of a headache.

But there is hope for finding the home of your dreams - if you're willing to wait.

"Patience is going to be really important through the process," said Miller. "When they find the house they really like they need to jump on it immediately and make sure they're ready to go."

That means having an agent and, if needed, a lender in place. Perez also has some advice: Don't get attached to a house before it's yours.

"You walk through and you don't want to act too happy because you know everything is hypothetical," he said.

It can be frustrating, but de Weerd says a booming real estate market fueled by out of state transplants should be seen more as a compliment than a challenge.

"They came to visit and they fell in love," said de Weerd. "I'm hearing the biggest promoter of the Treasure Valley are the people that live here."