'A lot of tears in my eyes': Hannifin's closes after nearly 100 years in downtown Boise

The historic cigar shop on the corner of 11th and Main has a colorful past, full of interesting stories and celebrity visitors. 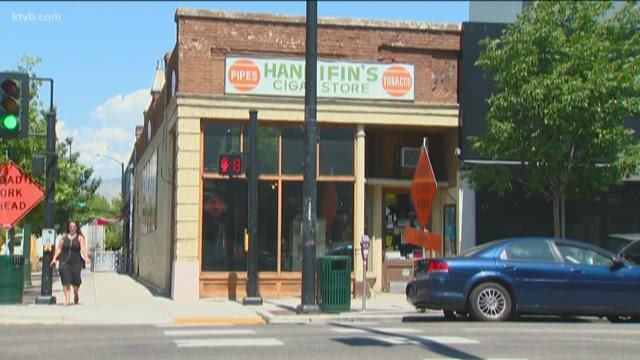 BOISE, Idaho — After nearly a century in operation, the owner of Hannifin's Cigar Store in downtown Boise has closed its doors and is selling the business.

According to Dan Everhart, historian with the Idaho State Historic Preservation Office, the building on the northeast corner of 11th and Main streets has stood since 1898. It was originally called the Beckwith Building and was a multi-store front that included a hardware store, grocery store and clothing store.

“I think it’s definitely, if not the oldest legacy building in Boise, one of the very oldest,” Everhart said.

In 1908, it became a cigar shop - though it was not called Hannifin's at that time.

“It was originally the Salmon Cigar Store, named for its owner, Edmund Salmon,” Everhart said.

John Hannifin was employed at Salmon Cigar and when Edmund Salmon returned to his home country of France in 1921, Hannifin ran the business. After Salmon died in 1922, Hannifin took ownership and changed the name.

Stan Minder has owned the store for the last 11 years, keeping its nearly 100-year legacy.

He tells KTVB he's sorry to have to close up shop but his health currently does not allow him to continue running the business.

“My number one thing is getting my health back up and straightened out,” Minder said.

But he said it's been a pleasure to be a part of Hannifin's legacy since 2008.

“I just manage the place. The people have owned Hannifin’s since day one," Minder said. "It was here way before I got here. A lot of tears in my eyes just because no place has ever treated me like family, like Boise and I’ve loved it since the day that I moved out here.”

Besides cigars, Hannifin's was known for selling a variety of items like beer, sodas, newspapers, comic books and many types of magazines, from cars to "gentleman's magazines."

A store that's been around for so long has many stories and Minder has heard no shortage of stories from Hannifin's customers over the years.

“I’ve heard stories from [Idaho governor] Brad Little about selling papers out of here, in front of this place," he said. "People running shoeshine places out of here, just millions of stories with this place."

Hannifin's has also been a popular spot for celebrities.

“It's a staple. It’s just a great building, so many people have been through it from all over," Minder said. "I mean, Neil Young, since I’ve had it, has been through here. I met the Soup Nazi from 'Seinfeld,' several rappers, just a lot of celebrities.”

According to Minder, the night Snowden murdered Cora Dean, he used the restroom in Hannifin's and the murder weapon was found in the gutter outside the shop.

Minder also showed KTVB the old tunnels that run under Hannifin's, that were rumored to have been used for prohibition runs during the 1920s.

Everhart, the historian, could not confirm that the tunnels were used for prohibition, but did say it could be a possibility.

The inside of Hannifin's kept much of its original 1900s artwork, and had the original flooring, paint, cabinets, magazine racks and wood stove.

“We do actually see a fair amount of buildings that look on the outside as they did when they were built. That’s not terribly uncommon," he said. “What’s uncommon is to see a building’s interior not go through massive changes over the decades.”

Minder is hopeful that someone will buy the business and continue Hannifin's legacy. He plans to keep the antiques and Hannifin's memorabilia in storage in hopes that someone buys it. Minder said he does not want to sell off any of the iconic pieces to various buyers - he wants to keep it all together.

The building Hannifin's occupied for a century, as well as 10 other buildings near it on Main Street, are part of the National Register of Historic Places.

Though it's an honor to be on the register, Everhart said being on the national register does not allow for any protection of the building. Those protections must come at a local level.

Boise does have historic districts, but the Hannifin's building does not fall into any of those districts so there are no protections on the building. It could be renovated or even demolished, if the owner chooses to.

“Boise has a little bit to catch up on that sort of thing," Everhart said. "Maybe this is the sort of business loss, or cultural loss or whatever you want to call it, that might help the City of Boise focus on that sort of legacy business protection."