Some are concerned about people traveling to the Riggins area during the coronavirus pandemic, as well as potential strain on local infrastructure. 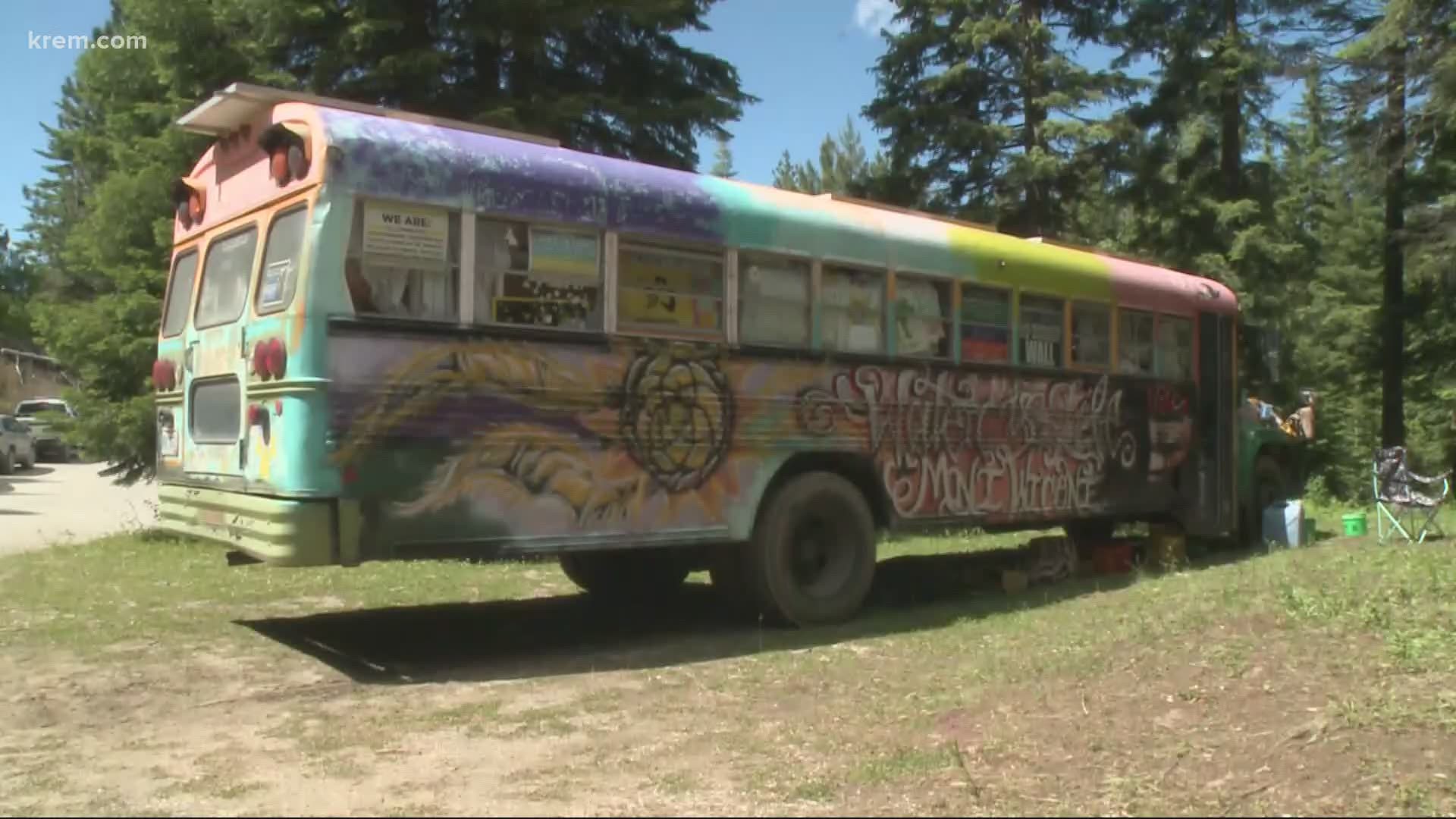 RIGGINS, Idaho — Members at a national gathering of a popular counter-culture movement in Central Idaho described the group's decision to meet in the Nez Perce-Clearwater National Forest as an opportunity to pray for peace and connect with one another.

This weekend, the Rainbow Family of Living Light is conducting its annual event on rural Forest Service property roughly 11 miles outside of Riggins. The event was expected to draw roughly 300 people to the remote area despite the COVID-19 pandemic, but about 500 people have since gathered in the area.

The peaceful counter-culture gathering started in 1972, and occurs in a different national forest each year. On a website, the Rainbow Family describes itself as the "non-organization of non-members."

RELATED: 500 members of Rainbow Family gather near Riggins, with more expected over the weekend

"It's not a protest. It's not a political movement. It's simply a prayer for peace," Michael said.

Michael spoke with KREM at one of the gathering's campsites near the Cow Creek Saddle area. In addition to praying for peace, the man said that the annual events consist of drumming, cooking, and workshops. Children and families are welcome at the events.

"It's really all the colors of the rainbow. It's all the people, all the creeds. All the religions," said Michael.

In nearby Riggins, however, some business owners were worried about the event drawing people from across the country to the rural county amid the pandemic.

"The town is aware and is kind of an aging town that has an at-risk population," said Mark Christensen, owner of the Salmon River Experience rafting company. "It's not the right time to bring a bunch of people from out of town."

RELATED: 'No mask, no service': Washington businesses must turn away customers without face masks starting July 7

Christensen, who also volunteers with the local EMS department, also feared that the Rainbow Family gathering could strain Riggins' infrastructure. The town has just one grocery store and two ambulances, he said.

"[I'm] a little bit torn on feelings," admitted Christensen of the gathering.

He said that he respects the Rainbow Family and that he has friends who have attended events before.

"It's a bummer, because there probably won't be another gathering for 15 or 20 years that's this close to my house," he said.

The U.S. Forest Service also expressed concerns about the event occurring during COVID-19.

RELATED: Confirmed coronavirus cases are rising in 40 of 50 states heading into holiday weekend

Jeff Shinn, a USFS District Ranger, told KREM that the Rainbow Family gathering was taking place without a permit. However, the event was not necessarily illegal, Shinn explained, from an enforcement standpoint since the gathering was comprised of multiple individuals on public land.

The gathering was also taking place despite restrictions due to coronavirus in Idaho, which has recently seen a spike in cases. The state currently restricts gatherings to 250 or fewer people as part of Stage 4 in the reopening process.

"People traveling from all over the world are coming here and we don't know what they're bringing with them," Shinn said. "Primarily, our concerns are the number of people making impacts to the natural resources. Whether its soil and water or vegetation. And a large concern of ours is the tribal interests."

Shinn added that USFS staff met with Rainbow Family members prior to the event. The agency has been staffing USFS law enforcement officers near the gathering.

An agency spokesperson on Thursday described interactions between USFS officers and Rainbow Family attendees as friendly.

"This isn't a protest," said Michael of the group's intentions. "This isn't a bunch of Antifa people looking to protest or cause problem. This is families, this is people with kids that are just coming together to pray for peace."

Michael also complemented Idaho County and Riggins, saying his interactions with locals had been positive.

RELATED: First case of COVID-19 in Shoshone County: What we know today